Oracle is losing the Warriors, but Oakland will always have Dame 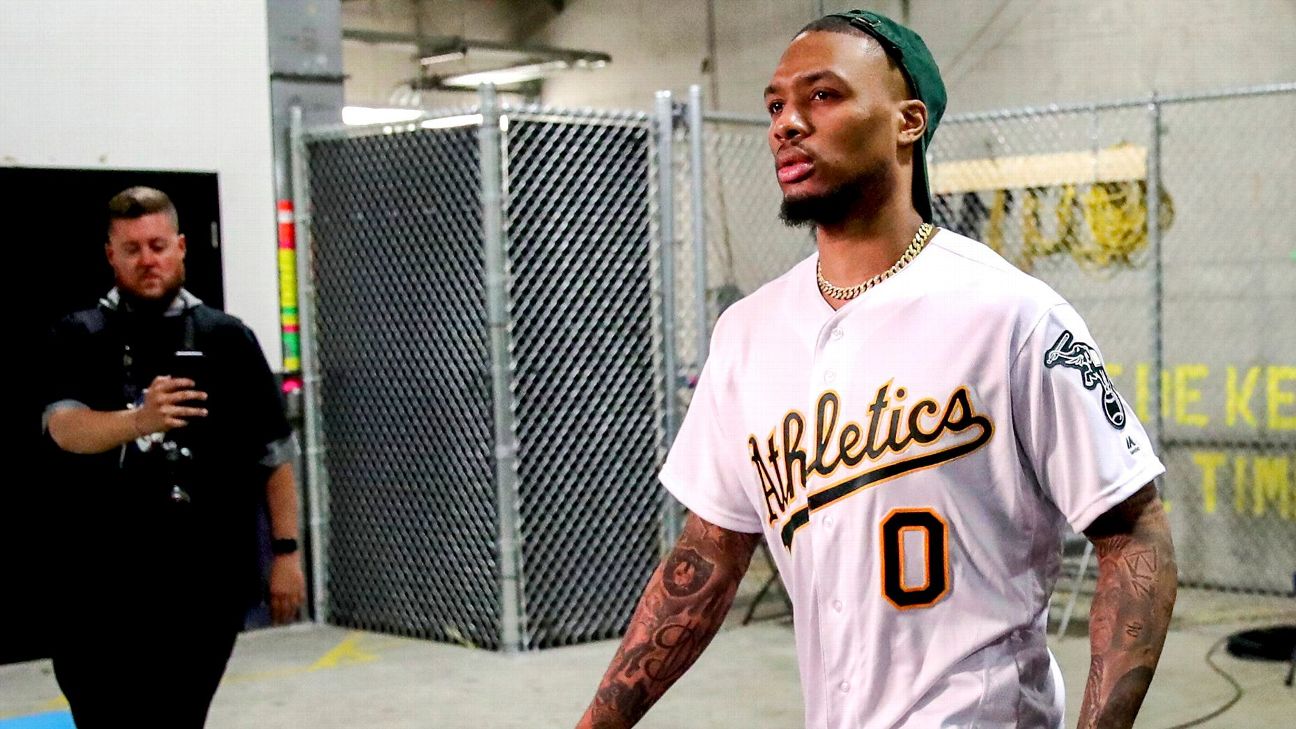 OAKLAND, Calif. -- It's a couple of hours before tipoff at Oracle Arena and Damian Lillard is thinking about pizza.

Sitting courtside ahead of Game 1 of the Western Conference finals against the Golden State Warriors, Lillard points across the court to a spot inside the mostly empty arena.

It's where his family had season tickets for a few of the franchise's lean years during Lillard's childhood in East Oakland (the Brookfield neighborhood, to be specific) when his dad, Houston Sr., used to bring Damian and his older brother, Houston Jr., to watch lottery-bound Warriors teams. They were fixtures in those seats; the boys would even walk to the arena when their dad couldn't take them.

"I remember they used to give out the pizzas, like during the timeouts," Lillard says. "Thunder [the Warriors' now-defunct mascot] would come out and they would have boxes of pizza that they would be looking to give out to fans. Me and my brother was there so much that the people recognized us and we was cool with them, so we always ended up getting one of the boxes of pizza. That was what we would eat.

"It was set up, man! It was funny because they knew me and my brother was real fans."

Lillard and his brother had what he recalls as "free run" of the arena, as he notes that security was much more lax in the days before the Warriors became a dynasty. They'd roam the hallways after games, ducking into the media room to grab a hot dog and soda, hanging out between the locker room and parking lot to see the players.

"I met every single player on the team," Lillard says, and he rattles off names from forgettable Golden State teams that averaged 19 wins during the three seasons his family had season tickets. He was a big fan of Antawn Jamison. He mentions Larry Hughes, Bobby Sura, Gilbert Arenas, Mookie Blaylock, Paul McPherson, Troy Murphy, Jason Richardson, Terry Cummings, Vonteego Cummings, Tony Farmer and Adonal Foyle, among others.

"I met all those dudes!" Lillard says, a glimpse of a kid's giddiness in his voice. "I got all their autographs."

Lillard is a bigger name than any of them now, a Rookie of the Year and four-time All-Star whose 37-foot buzzer-beater that eliminated the Oklahoma City Thunder serves as the signature moment of these playoffs. So far.

Now, even as the Portland Trail Blazers trail the West finals 1-0, the Oakland kid has an opportunity to close out Oracle before the Warriors move to San Francisco's Chase Center next season.

"It's a storybook," Lillard says. "Just this being the last year playing in Oakland [and] me growing up here. ... It's a special ending. Hopefully, it'll end the right way for us."

All the Trail Blazers have to do is become the first Western Conference team in five years to eliminate the Warriors from the playoffs. The odds are certainly stacked against Portland and Lillard. However, those who witnessed Lillard's journey from undersized high school kid who couldn't get Division I coaches to give him a look to joining legends such as Bill Russell, Gary Payton and Jason Kidd as the best basketball players the city has produced, have hope.

"The perfect ending to this story is for it to go Game 7," Lillard's Oakland High coach, Orlando Watkins, says. "And the Oakland kid hits a game-winning shot to send the champs reeling out of the playoffs and close down the Oracle."

IN THE MIDDLE of the old Oakland High gym Lillard and Adidas refurbished a few years ago, Watkins stands and recalls the one time he really butted heads with the kid whose retired No. 1 hangs on the wall.

"We're in practice and I'm just like, 'You guys are playing selfish!'" Watkins says. "What Dame heard was, 'You're selfish.'"

Lillard could handle being coached hard -- such as accepting being benched if he was late to study hall -- but this criticism really hit a nerve. He pouted in practice the next couple of days, refusing to shoot the ball during scrimmages to prove his point.

Finally, hours before a game against a crosstown rival during a playoff race, Watkins pulled Lillard aside. The coach told his point guard that he meant that the team as a whole was playing selfishly, not Lillard in particular.

Lillard replied that, as the Wildcats' leader, he took any criticism of the team personally. And he just couldn't stand being considered selfish, of all things.

Watkins laughs about it now, as he goes to work each day in a gym that serves as proof of Lillard's generosity.

Oakland High is the city's oldest high school, having opened in 1869, and much of it is outdated. The gym was, too, until a few years ago, when Lillard and Adidas completely remodeled it, getting rid of the ugly orange paint and replacing it with the school colors of blue and white, replacing the scoreboard, baskets and shot clocks, adding banners and refinishing the floor. They also renovated the weight room, replacing all the equipment, putting in a new floor and painting the walls.

Lillard also paid to install a soundproof recording studio and for state-of-the-art equipment in the classroom where his Hip Hop Club met in high school.

Lillard, who released a rap album as "Dame Dolla," celebrated all the renovations by hosting a rap concert along with Fetty Wap, DJ Esco and Lil Uzi Vert for Oakland High students in the gym. His goal was more to inspire than to entertain.

"I don't have a typical story," Lillard says. "I wasn't a high school phenom. I wasn't a big-time prospect even in the draft before my last year in college. A lot of people notice when you look at stars in the NBA, they come up in it. They've got all the mix tapes on YouTube coming up. They're ranked and all that stuff, so it's kind of like people invest in their careers.

"With my teachers and my coaches, it was more like character and building me as a man from all these people, and they didn't have to do that. And they didn't know. They didn't know that I was going to become this, and they invested in me as a person to allow me to get this far. I know how important it is because of what my route is.

"I know how important it is for people to just -- sometimes you just need somebody to be in your corner."

For Oakland High basketball players, Lillard isn't just a guy who signs an occasional check or made sure they had a shoe sponsorship, as he did for his old AAU program. He isn't just an All-Star whose picture is on the wall. He's one of them, a role model within their reach, whether he's running drills with them during one of his summer workouts at the high school or providing wisdom and advice from afar.

"He's just a perfect storm," Watkins says, as assistant principal Shoshana Towers-Cabrera nods in agreement. "He's all Oakland. It's very nice to have that person that I can point to, but they also know that they can hit him on [Instagram] or hit him on Facebook, and he'll know who they are."

Lillard treats his old neighbors in Brookfield, a small, tough pocket of East Oakland, the same way. His offseason cookouts in the old park -- a place where he used to witness violence and drug deals -- get bigger by the year.

Lillard feeds the whole neighborhood, provides backpacks for kids and pays barbers and hairstylists to get them looking fresh for school. He brings in bounce houses and all sorts of other activities. And he mingles with his people, holding his baby son with one arm and shaking hands and giving half hugs with the other at last year's event.

"I'm not here to be exclusive," Lillard says. "I don't take pride in being exclusive, like, 'Oh, Dame made it to the NBA.' That's not what it is. I want to be available to the kids to help. They might not listen to their parents, but they'll listen to me.

"They'll listen to me when I tell them, 'You don't have to follow what is typical in our city.'"

Lillard has made Portland his home, but Oakland is literally always on his heart. The city's logo -- the tree on street signs that the Warriors used for one of their uniforms this season -- is tattooed across his chest along with "Oakland" in large letters at the top and "Heart of the City" at the bottom. That loyalty shows in how he treats the people from his hometown.

"This is who he is," says agent Aaron Goodwin, a fellow Oakland High alum who has represented Lillard since he was a relatively unknown lottery pick coming out of Weber State. "That's how he was raised. That's how a lot of us from Oakland are.

"You've got to remember where you come from."

FOR THE RECORD, Lillard never planned on trolling the Warriors.

Lillard didn't even know about the massive billboard Hulu bought outside Oracle Arena before it went up earlier this postseason. He found out about it by a flurry of texts from friends and family who saw it while driving down Interstate 880, thrilled to see Lillard's picture looming so large over his hometown.

"If they had asked me, I probably would have said that I'd rather y'all put it outside the Moda Center in Portland," Lillard says. "But it's pretty cool that it's in Oakland. Everybody that I know that has driven past there has sent me a picture of it."

It was quite the creative marketing ploy by Hulu, which blasted a quote attributed to Lillard across the top of the billboard:

"I'D NEVER SELL OUT. EXCEPT TO TELL YOU HULU HAS LIVE SPORTS."

Was Lillard, the All-Star point guard who had pledged his loyalty to the Trail Blazers despite little playoff success, taking a jab at Golden State superstar Kevin Durant? Was Lillard taking a shot at the Warriors for abandoning Oakland after this season to bolt across the Bay for the swanky new arena they're building in San Francisco?

"He's much more respectful than that," Goodwin says. "He wouldn't do anything like that intentionally."

Sure, but the marketing stunt paid off, as the billboard created a viral buzz due in large part to its location.

And there is also plenty of truth in advertising. Ask around Oakland, and it's not hard to find folks who can confirm Lillard would never sell out.

"People from Oakland don't say, 'I'm from the Bay,'" Lillard says. "We say we're from Oakland, because it's not the same.

"We say we're from Oakland, man, and that means something to people. That type of pride."

(Editor's note: Hulu is majority-owned by The Walt Disney Company, which also owns an 80 percent share of ESPN.) 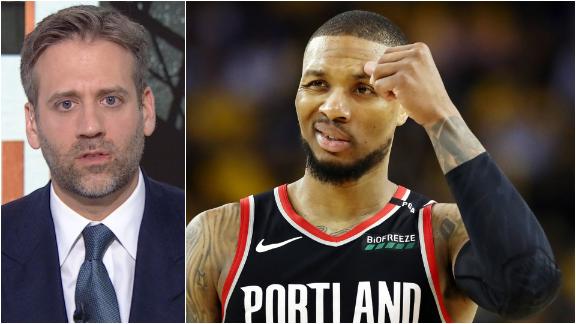 Kellerman: Lillard's leadership will bring Blazers Game 2 win
Max Kellerman commends Damian Lillard on his leadership skills, saying they will lead the Trail Blazers past the Warriors in Game 2. 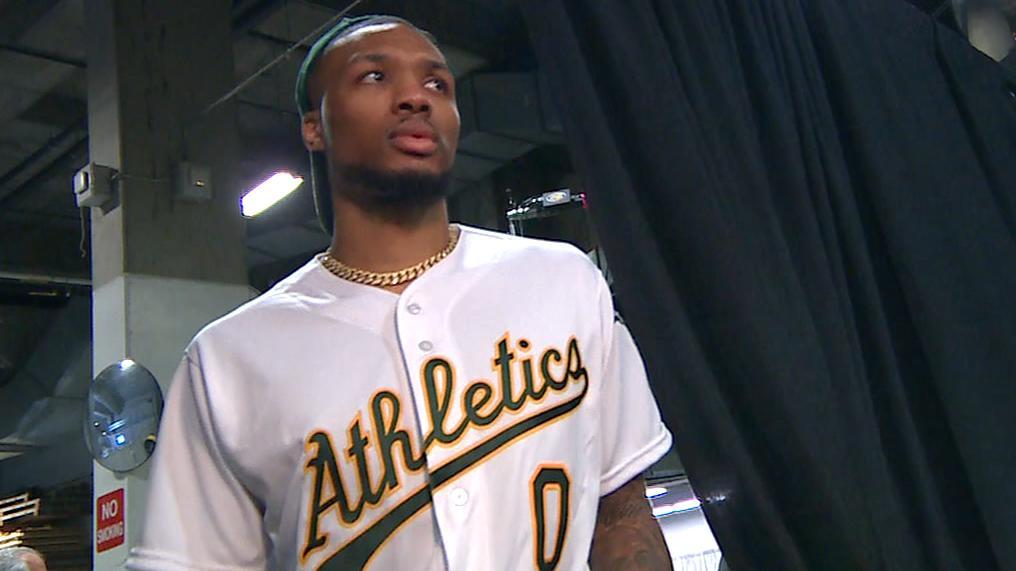 Lillard arrives in customized A's jersey
Oakland native Damian Lillard arrives at Oracle Arena in an Athletics jersey prior to the Blazers' Game 1 matchup vs. the Warriors. 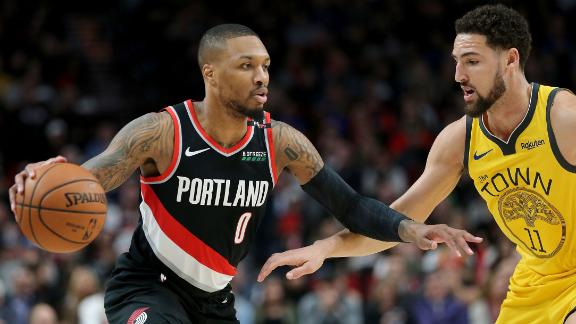 It's been Dame Time vs. Warriors this season
Damian Lillard has averaged 28 points and hit a crucial go-ahead 3-pointer in OT against the Warriors this season. Take a look at the highlights.
Report a correction or typo
Related topics:
sportsespngolden state warriorsdamian lillardnbaportland trail blazers
Copyright © 2021 ESPN Internet Ventures. All rights reserved.
More Videos
From CNN Newsource affiliates
TOP STORIES