Raiders GM Mike Mayock endorses Derek Carr, calls him 'one of the top QBs in the NFL' 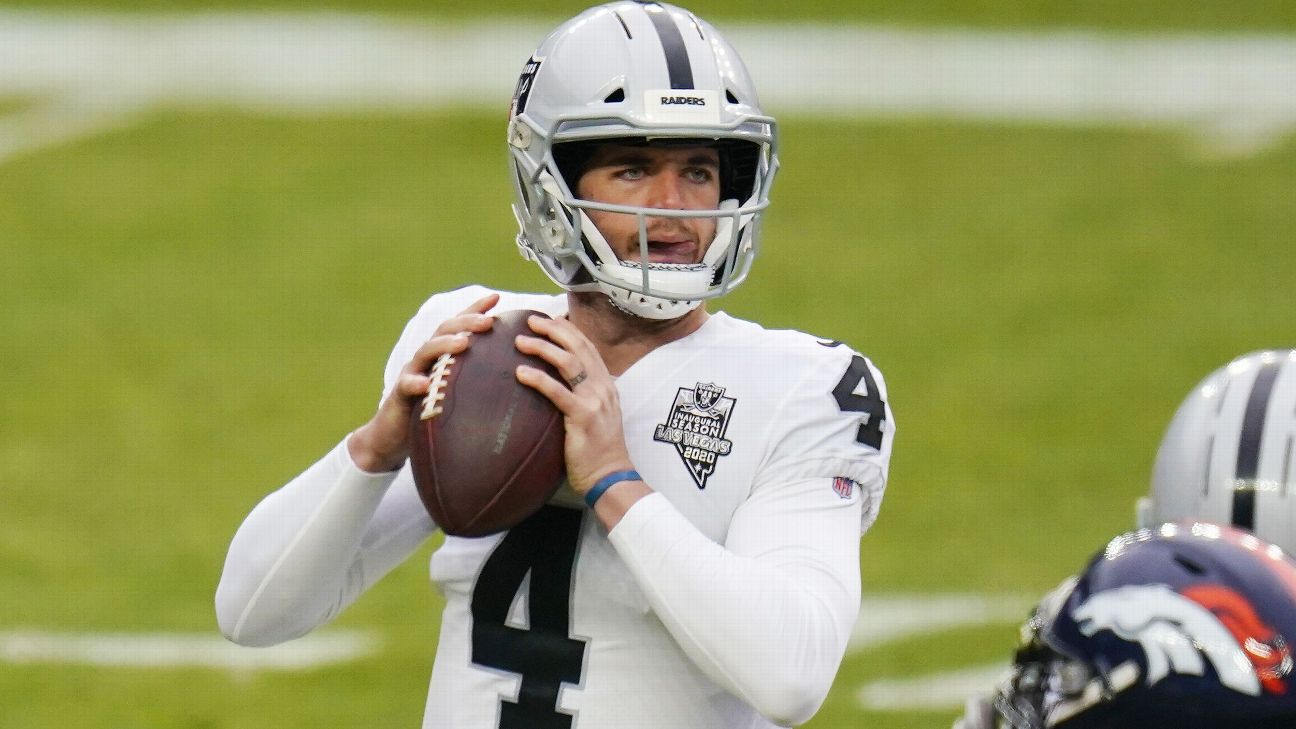 "I think Derek Carr had his best year yet, under Jon Gruden," Mayock said in a Zoom meeting with reporters, "I think he's one of the top quarterbacks in the NFL, and we couldn't be happier with him. And I tell you every year -- we evaluate every position every year. I have no idea who might call me [for a trade] or who might not call me. So, you have to do the evaluations, both on your own players and every other player in the league. And you've got to stack your boards and understand what league value is all around the league, and we do that.


"But if you're asking me [specifically] about Derek, I think Jon and I would both stand shoulder to shoulder and pound the table for Derek Carr."

The Raiders have been linked toDeshaun Watson and toRussell Wilson, whose agent listed Las Vegas as one of his four desired destinations-- along with New Orleans, Dallas and Chicago -- if the Seattle Seahawks chose to trade him.

Carr, meanwhile, is coming off his third straight year with Gruden. Last season, Carr had career highs in passing yards (4,103), passer rating (101.4) and Total QBR (71.0) with 27 touchdowns and 9 interceptions for a Raiders team that finished 8-8, a one-game improvement over the 2019 season, but lost five of its last seven games and was just 2-6 in its new home of Allegiant Stadium. In his career, Carr, who signed a five-year, $125 million extension in June 2017, has a career record of 47-63, with just one winning season.

Mayock, meanwhile, was not as effusive in his praise when it came to right tackle Trent Brown, who signed a then-record-for-an-offensive lineman four-year, $66 million free-agent contract in 2019.

Brown has played 10-plus snaps in just 14 of 32 games with the Raiders.


"Regarding Trent, the jury's still out here," Mayock said. "He's under contract and, again, we believe in the talent of that player. There'd be nothing finer than to have Trent Brown at right tackle, protecting Derek Carr, next year, Week 1. But the jury's out, and we still have to make some decisions on our roster in general."

"Trent's whole thing is, when he's healthy, in shape and ready to go, he's as dominant as any tackle in football, and he proved that early in the 2019 season," Mayock said. "Since then, it's been kind of a roller coaster. Really, what he needs to do, I think more than anything, is get himself in the best shape of his life and come out ready to prove that he is a dominant tackle in the National Football League, and really that's all it takes -- if Trent gets in shape and stays committed, there's not a better talent out there."