Ralph Branca, who gave up 'Shot Heard 'Round the World,' dies 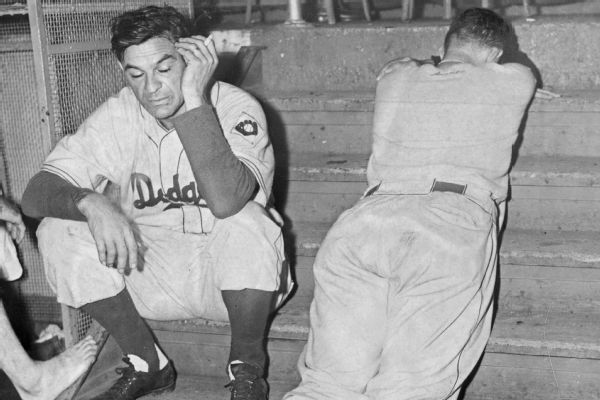 Ralph Branca's baseball life will always be defined by one pitch.

Branca, who gave up a home run to the Giants' Bobby Thomson, the "Shot Heard 'Round the World" that cost the Brooklyn Dodgers the 1951 National League pennant, has died at the age of 90.

His son-in-law, former major league manager Bobby Valentine, said that Branca died Wednesday at a nursing home in Rye, New York. No cause of death was given. Valentine announced Branca's death on Twitter.

Thomson's home run on Oct. 3, 1951, one of the most famous in baseball history, completed the "Miracle of Coogan's Bluff," the Giants' climb from a 12-game deficit in the NL.

Commissioner Rob Manfred issued a statement that said in part, "Ralph was a true gentleman who earned universal respect in the game he loved and served so well. Ralph's participation in the 'Shot Heard 'Round the World' was eclipsed by the grace and sportsmanship he demonstrated following one of the game's signature moments.

"He is better remembered for his dedication to the members of the baseball community. He was an inspiration to so many of us."

On April 15, 1947, Branca was standing next to Jackie Robinson during pregame ceremonies as Robinson prepared to break baseball's color barrier. Mindful of the death threats that had been made against Robinson, Branca's brother John worried that he could have been collateral damage in any attempt on Robinson's life.

"What if the guy's a lousy shot," John Branca asked.

"Then I would've died a hero," Ralph answered.

Branca went on to have his best season in 1947, posting a 21-12 record with a 2.67 ERA. He became the second-youngest pitcher to win 20 games and earned the first of his three consecutive All-Star Game selections.

"Branca to me was a hero. I admired him so much," Hall of Fame manager Tommy Lasorda said in a statement released by the Dodgers. "Ralph and I became very close, my family and his family. I always enjoyed being around him. He was a tough one in every way and I really admired him."

Branca pitched in the major leagues for 12 seasons, posting an 88-58 record, but he's best remembered for the home run he gave up to Thomson.

The Dodgers held a 4-2 lead in the third game of a three-game playoff against the Giants when Branca came on in relief of Don Newcombe with one out and two men on. Thomson hit Branca's second pitch down the left field line for the game-winning home run.

Later Branca recalled sitting with a priest and family friend, asking why this had happened to him.

"Because," he was told, "you're strong enough to bear it."

Branca and Thomson, wedded in baseball lore, later forged a friendship that carried through appearances and card shows. Thomson died in 2010 at the age of 86.

"I was closer to Ralph than to any other Dodger. We traveled around the world and became very good friends," Hall of Fame broadcaster Vin Scully said in the Dodgers' statement. "He carried the cross of the Thomson home run with dignity and grace. I was grateful for his friendship and I grieve at his death. He was a great man."

When he retired, Branca became a financial executive, selling insurance policies. He appeared as a contestant on the game show "Concentration" in 1963, winning 17 consecutive times. And he became a driving force behind the Baseball Assistance Team (B.A.T.) that helps former ballplayers who fall on hard times.

Branca and his wife, Ann, had two daughters, Patricia and Mary. Valentine married Mary Branca in 1977.