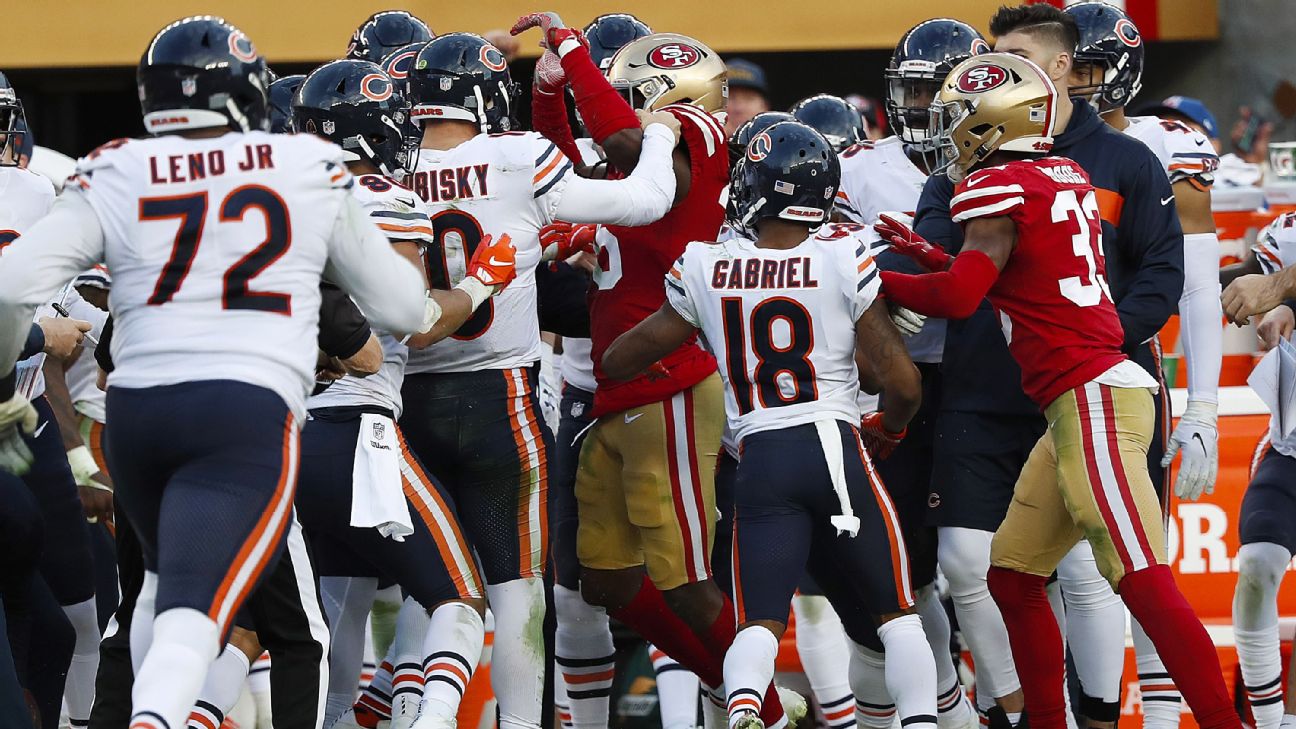 "I wasn't going out for him," Harris said. "I knew what comes with penalties and I wasn't trying to give my team a big penalty in that moment of the game. Obviously, you can see what happened. I felt like I laid up on him."

Whether or not Harris did it intentionally, he did hit Trubisky after he slid and that hit did draw an unnecessary-roughness penalty and sparked a melee between the Bears and 49ers that resulted in the ejection of three players, including Niners cornerback Richard Sherman.

With 5 minutes, 39 seconds left in the fourth quarter, Trubisky scrambled to his left for a gain of 7 yards before sliding to the ground. Rookie safety Harris ran at Trubisky and lowered his hands and shoulder toward Trubisky after the quarterback had given himself up, drawing a flag for unnecessary roughness and an angry reaction from Chicago's sideline.

As multiple Bears rushed to stick up for Trubisky, other Niners entered the fray, setting off a fight that included multiple shoving matches and a flurry of punches. Bears receiver Anthony Miller immediately hit Harris, drawing another flag for unnecessary roughness.

"I just saw Mitch's head hit the ground real hard," Miller said. "Nobody had to tell me nothing. That's our quarterback. He already missed a couple games because of a late hit, so when I see that, I don't support that type of play."

Sherman ran across the field to get into the mix and quickly engaged with Bears receiver Joshua Bellamy, throwing a series of open-hand punches as Bellamy fought back. After officials spent a few minutes sorting out the scrum, Sherman, Bellamy and Miller were ejected and made their way to the locker room.

After the Bears' 14-9 victory, Sherman said he felt Harris had been surrounded and pushed for too long and he wanted to protect his teammate.

"These are my guys," Sherman said. "I don't care at the end of the day what the deal is -- you're gonna do all that and you let him go. And it took too long for them to let him go. So I went in there to grab him, and they continued to pull and jerk and grab on me. And I'm a grown man with kids; I don't care about any of that. And at the end of the day, they're gonna get punished for it. I'm a grown man; you don't grab, pull on me -- I don't put my hands on you, you don't put your hands on me. You put your hands on me, you're gonna feel me.

"I felt like they went over the top, and I responded with over-the-top."

Trubisky missed two games earlier this season after suffering an A/C joint injury in his right shoulder Nov. 18 after a late hit from Vikings safety Harrison Smith. Smith hit a sliding Trubisky in the left shoulder as his right shoulder went into the turf. Flashbacks to that moment brought further anger from Trubisky's teammates for the hit he took Sunday.

"Oh, man, that was dirty," linebacker Danny Trevathan said. "I don't like that. I don't play when it comes to my quarterback. I've got Mitch's back through whatever. That's my teammate."

This time, Trubisky did not suffer any apparent injuries and finished the game 25-of-29 for 246 yards with a touchdown for a passer rating of 113.5.

"We're brothers out there, we're a family, we are going to protect one another," Trubisky said. "It was nice to see they had my back. I hope they know I always got theirs as well. We just gotta play smart football and go from there. Cool to see those guys jump [in]. But we gotta be smart about it."

After the officials finally were able to break up the fight and after a lengthy discussion among them, Niners coach Kyle Shanahan was informed that Sherman had been ejected and he quickly informed the veteran defensive back.

Shanahan said from his view of the replay of the hit that it appeared to be a good call. Bears coach Matt Nagy added that he believed that "none of it was intentional."

Shanahan also commended Sherman for sticking up for a teammate, with the caveat that he'd prefer it not cross the line to being thrown out.

Sherman, who watched the rest of the game from the kitchen area just off the team's locker room, also took umbrage with the idea that quarterbacks should get as much protection out of the pocket as they do in it.

According to ESPN Stats & Information research, that brings the ejection total across the NFL this season to 17, the highest in any season since 2001, following the three ejections in the Niners-Bears game and the ejection of the New York Jets' Leonard Williams earlier Sunday. The previous high was 13. There have now been 32 ejections since Week 9 of last season. 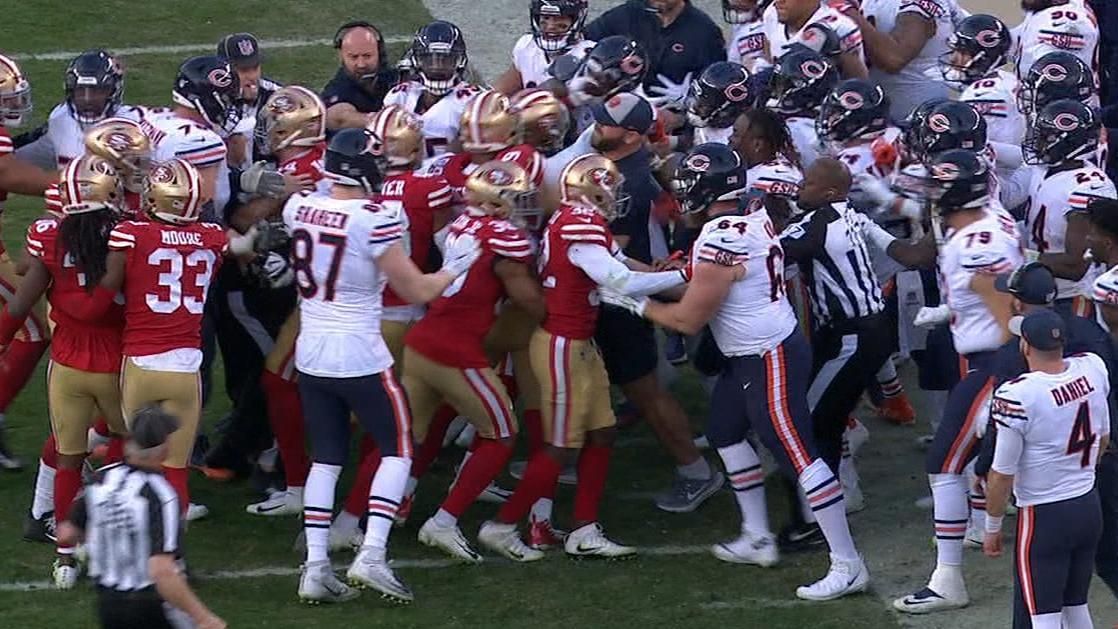