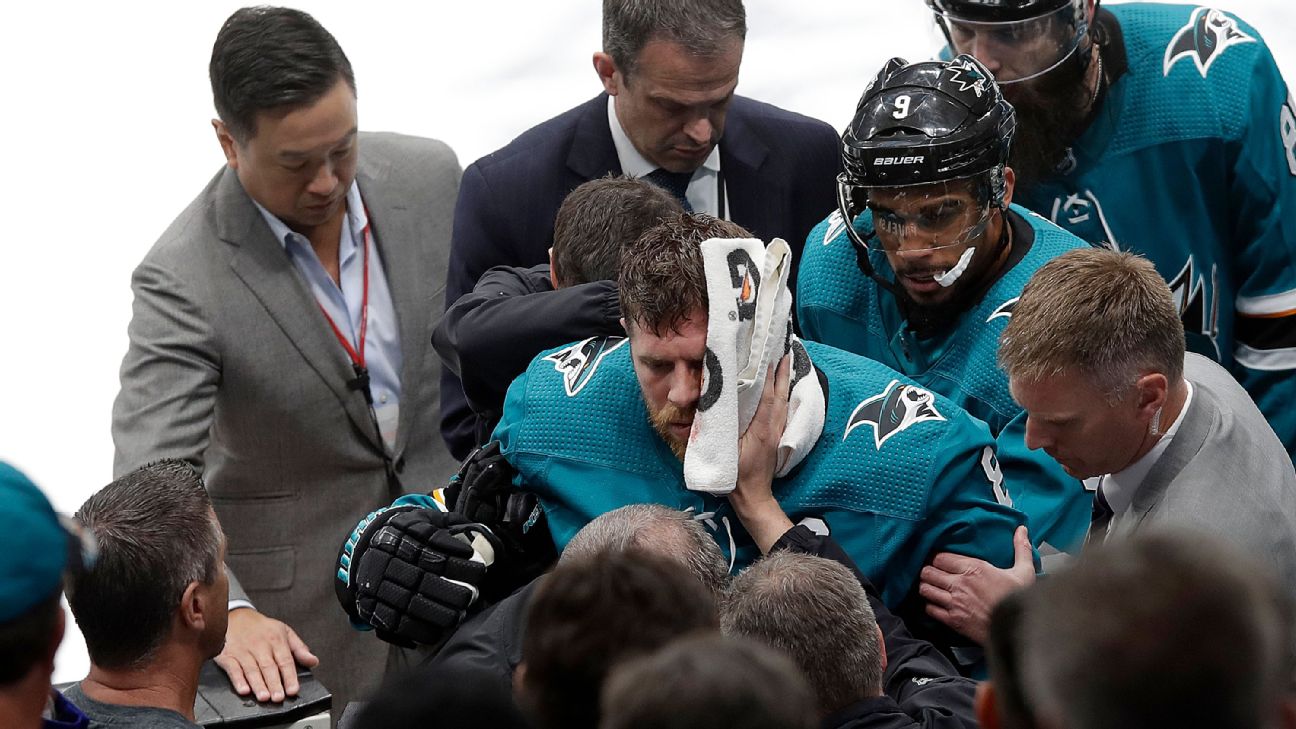 San Jose Sharks coach Peter DeBoer wouldn't rule out a return by star captain Joe Pavelski to the lineup during their series against the Colorado Avalanche.

Pavelski has missed the first three games of the series, which San Jose leads 2-1, following a gruesome injury he suffered when his head struck the ice in Game 7 against the Vegas Golden Knights on April 23.

"He's getting better every day. He was FaceTiming us after the game last night, so he's feeling better," DeBoer said Wednesday, the morning after the Sharks defeated the Avalanche in Game 3. "We're all excited about the progress he's making."

DeBoer said Pavelski was expected to resume skating on Wednesday back in San Jose.

Midway through the third period in Game 7, Pavelski's head hit the ice following a cross-check to the chest by Knights center Cody Eakin and a collision with Vegas forward Paul Stastny. Pavelski was motionless for a moment, bleeding profusely through the top of his helmet. Brent Burns and other Sharks players surrounded their captain, calling for the training staff to come out. Pavelski eventually sat up and gingerly skated to the back, his teammate Joe Thornton pressing a towel against his head.

Pavelski would not return to the game. The Sharks used the energy of that moment to rally from a 3-0 deficit and tie the game, thanks to a five-minute major to Eakin on the play. They'd eventually win Game 7 in overtime.

DeBoer has declined to specify if the injury was a concussion, but has said "he was feeling the effects. You can put two and two together on that."

Pavelski had 38 goals and 26 assists in 75 games this season, and two goals and two assists in seven playoff games. In his career, Pavelski has 95 points in 128 playoff games, including an NHL-best 14 goals during the Sharks' run to the Stanley Cup Final in 2016.

"Pavelski is a big hole for us. He's a big piece of everything we do. We knew the challenge coming into this series. When Pavs has been out in the past, we haven't handled it well. We've been exposed a little bit by missing him in different situations," DeBoer said.

But the Sharks have managed to fill that void with their depth, moving forward Gustav Nyquistup to Pavelski's usual spot on the top line with Logan Couture and Timo Meier.

Pavelski has had a presence around the team since the injury, hanging around the practice facility, although he did not make the trip to Denver. His injury has continued to be a rallying point.