Stephen Curry, amid breakout rally, fails to hold tongue: 'I blacked out' 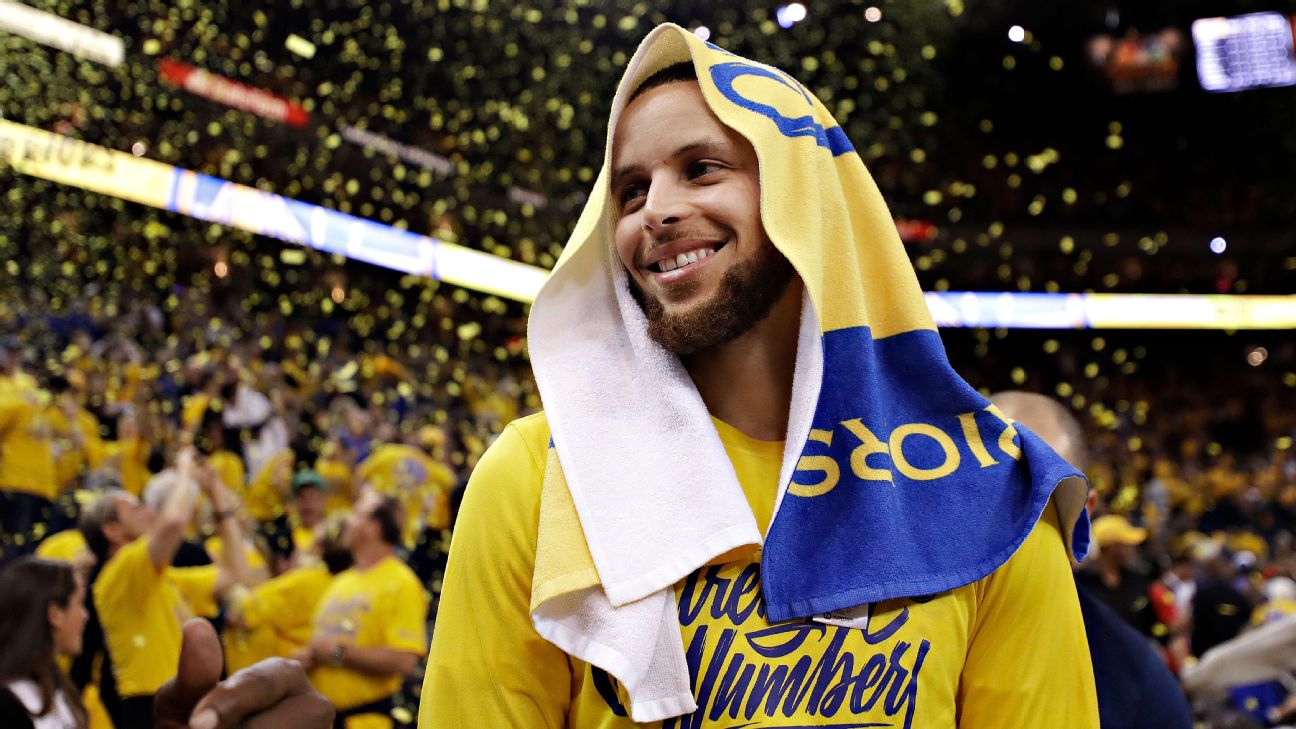 OAKLAND, Calif. --Stephen Curry was cooking so much in the third quarter of Game 3 that after a successful driving floater in traffic, he faced the crowd, took his mouthpiece out and shouted, "This is my f---ing house!"

Curry's emotions erupted in step with his offensive output as he scored 18 of his game-high 35 points in a pivotal third quarter in which the Golden State Warriors broke the game open, resulting in a126-85 thumping of the Houston Rockets to take a 2-1 series lead in the Western Conference finals.

His mother, Sonya Curry, was pleased with her son's performance, but not with his mouth.

"She already sent me two home videos, showing me the clip and playing it back," Curry told ESPN. "She was telling me how I need to wash my mouth out, saying to wash it out with soap. It's a message I've heard before."

It was Curry's breakout game in this series, but he is a devout Christian and says he understands why he received such a scolding.

He cooled off his tongue thereafter, but he channeled his emotions elsewhere.

In the same quarter, Curry received the ball fromKevin Durantwell beyond the 3-point line and launched a 30-footer over the outstretched arms of Chris Paul that tickled nothing but the net.

About a minute later, Curry used a screen to get James Harden to switch onto him and he crossed him over and nailed a step-back contested triple. And while backpedaling to get set on defense, the two-time MVP stopped and performed a shimmy dance to the fans' delight.

"You know, I've seen those explosions happen here and everywhere," said Draymond Green, who provided 10 points, a game-high 17 boards and six assists. "It's not just here. Nonetheless, definitely get a lot of support from the fans. His 3 is similar to some people's dunk. You go to certain arenas and a guy gets a dunk and it's just absurd. That's how his 3-ball is. But definitely a lot of support. The fans were great tonight. I think he had a great quarter there in that third quarter. I don't mean to disappoint, but I've seen crazier from him, but it was good to see."

Curry thrived despite a Rockets game plan that continued to target him on the defensive end, a strategy that had seemed to work in tiring him out in Games 1 and 2.

Curry was the primary defender on 15 plays in Game 3, tied for the second most by a Warriors player with Kevon Looney behind Green's 17.

In Game 2, the Rockets targeted Curry on 23 possessions, the most he has been targeted in a game this postseason. He was the primary defender on 20 plays in Game 1.

With Curry getting picked on defensively for the series' first two games, it was Harden's turn Sunday.

The Warriors were 7-of-11 from the field with Harden as the primary defender, and it included a combined 6-of-7 by Curry and Durant, who supplied 25 points. Golden State shot 8-of-14 (6-of-10 contested) against Harden. Of the eight field goals that the Warriors made against Harden, five were layups or dunks.

"Just being aggressive in those situations," Curry said about attacking Harden. "Because I find myself in those type of isolation situations a lot with how they guard, so you can make plays and be ready for those type of one-on-one situations."

Going into the contest, Curry was struggling with the long ball, with 2-of-13 shooting from beyond the arc. He started off the game 1-of-6 from 3, but ended the evening 13-of-23 from the field and 5-of-12 on 3-pointers.

He said the emotions he played with had nothing to do with how much his play has been criticized recently.

"A lot of it was just [me] talking to myself, almost like you've got to be your biggest fan sometimes," he said. "No matter what questions I was being asked over the first two games or what the expectations was, I had the highest expectations for myself. And you've just got to -- find whatever you want to get going. I mean, obviously, it felt good, and you want to use that energy to show your teammates that you're here, you're with them, get the crowd into it. But it's one game, and you've got to have that same type of energy and intentions and focus the next game and the right approach. So, I did my job tonight. I've got to do it again."

Curry, Durant and Klay Thompson (13) combined for 73 points. The Warriors are 4-0 this postseason when the trio combine for 70 or more. Curry extended his NBA-record streak of playoff games with a made 3-pointer to 82 games.

He appears to be back, but his coach says he never left.

"This guy's a two-time MVP, and he bounces back from bad games as well as anybody I've ever seen, so it didn't surprise me," Warriors coach Steve Kerr said.