Warriors' Jacob Evans taken to hospital for evaluation after collision 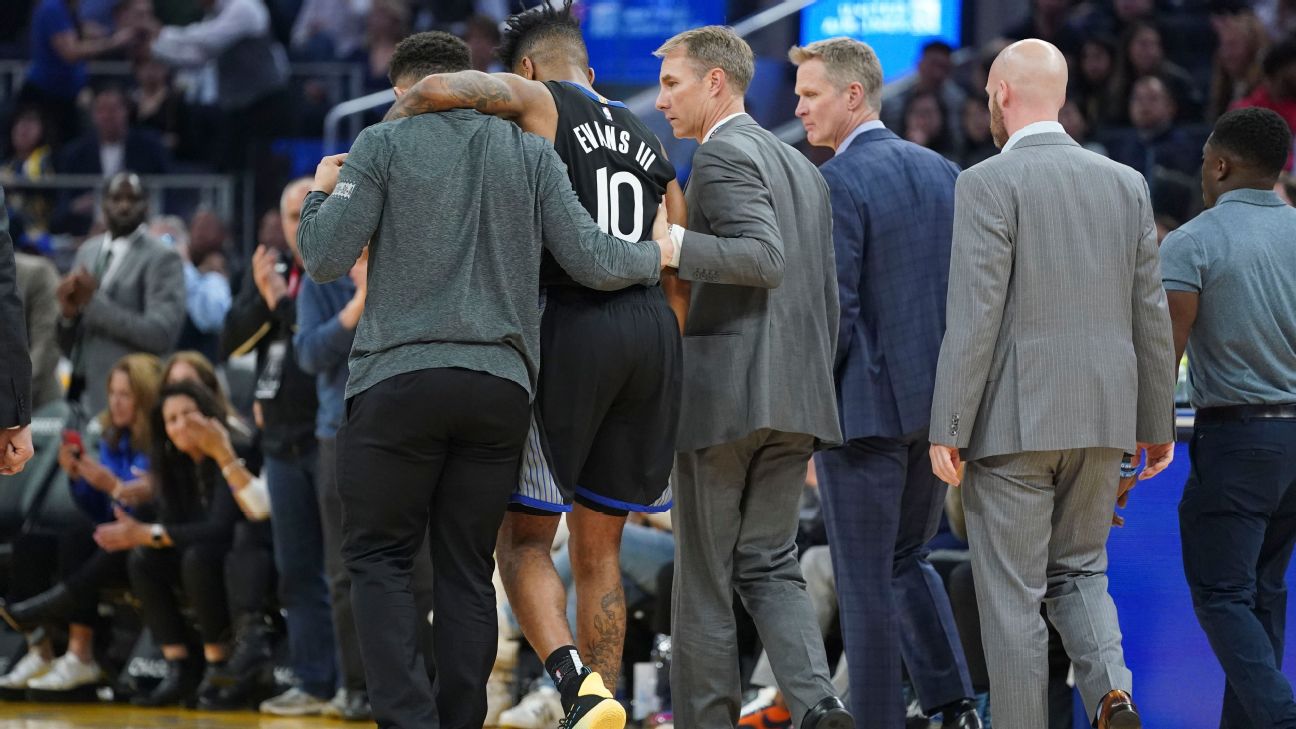 The play occurred with 4:38 remaining in the first half as both Evans and Powell went up to the rim to grab the ball. Powell's right elbow inadvertently came down on Evans' face as Evans fell to the floor. The second-year guard stayed on the floor for several minutes while being checked out by the Warriors' medical staff, but he appeared woozy.

He eventually made his way off the floor with the help of members of the Warriors staff by his side.

"The doctors were communicating with him," Warriors coach Steve Kerr said after the game. "I checked in on him at halftime. He was in the room with the doctors and they were taking him to the hospital -- they're with him now, they're checking everything out and we'll have a report later. I haven't heard anything since halftime."

Compounding Evans' injury is the fact the Warriors are now 9-33 on the season after their latest loss. It's the team's ninth loss in a row.

"The losing part is the hardest part," Kerr said. "You can pick apart the details. The defense tonight, we struggled to get stops, but we're also playing the No. 1 offense in the league and they've been a tough matchup for us this year. I think what I don't like is the feeling of things snowballing on us.

"We've been competitive for the most part this year and I think right now we're in a tailspin and we've got to stop that. And the way to stop it is to really fight defensively and play with a sense of desperation, and we've got to get to that. That's the only way we're going to get out of it. Last couple games, I haven't felt like we were very competitive, and that's what we have to get to."

Evans, who missed several weeks earlier in the season because of a left adductor strain, rejoins a long list of Warriors, including Stephen Curry (broken hand) and Klay Thompson (torn ACL), who have missed significant time this season. Despite all the setbacks, the Warriors' locker room remains upbeat as Kerr tries to keep his players' collective spirit up.

"It'd be pretty tough for me to complain about the hand I've been dealt," Kerr said. "It's been a pretty good run and it's an incredible organization and great place to live and people to be around. So a lot to be thankful for, and it's a tough season, but this is how it works. This is how sports work -- it's life. You just got to get through the tough times and you keep fighting, keep working with the idea that better times are ahead.

"So my job is to keep the guys -- keep their spirits up, try to keep the goal clear. Little goals each day. See things in the games that we have to look at and improve upon, and just soldier on." 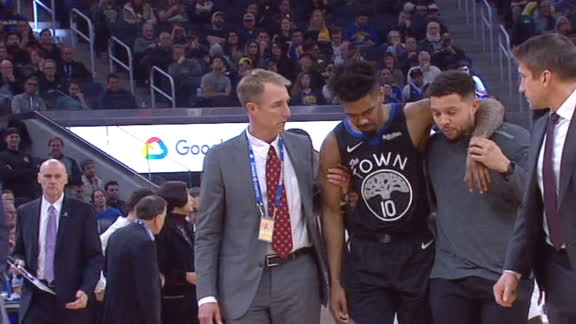 Evans helped to the locker after getting elbowed in the chin
Dwight Powell inadvertently elbows Jacob Evans in the chin as he goes to catch a pass. Evans would remain down for a bit before being helped to the locker room.
Report a correction or typo
Related topics:
sportsespnnewsgolden state warriorsjacob evansnba
Copyright © 2021 ESPN Internet Ventures. All rights reserved.
More Videos
From CNN Newsource affiliates
TOP STORIES