Will Durant stay or go? Like Thunder, Warriors are stuck in a waiting game 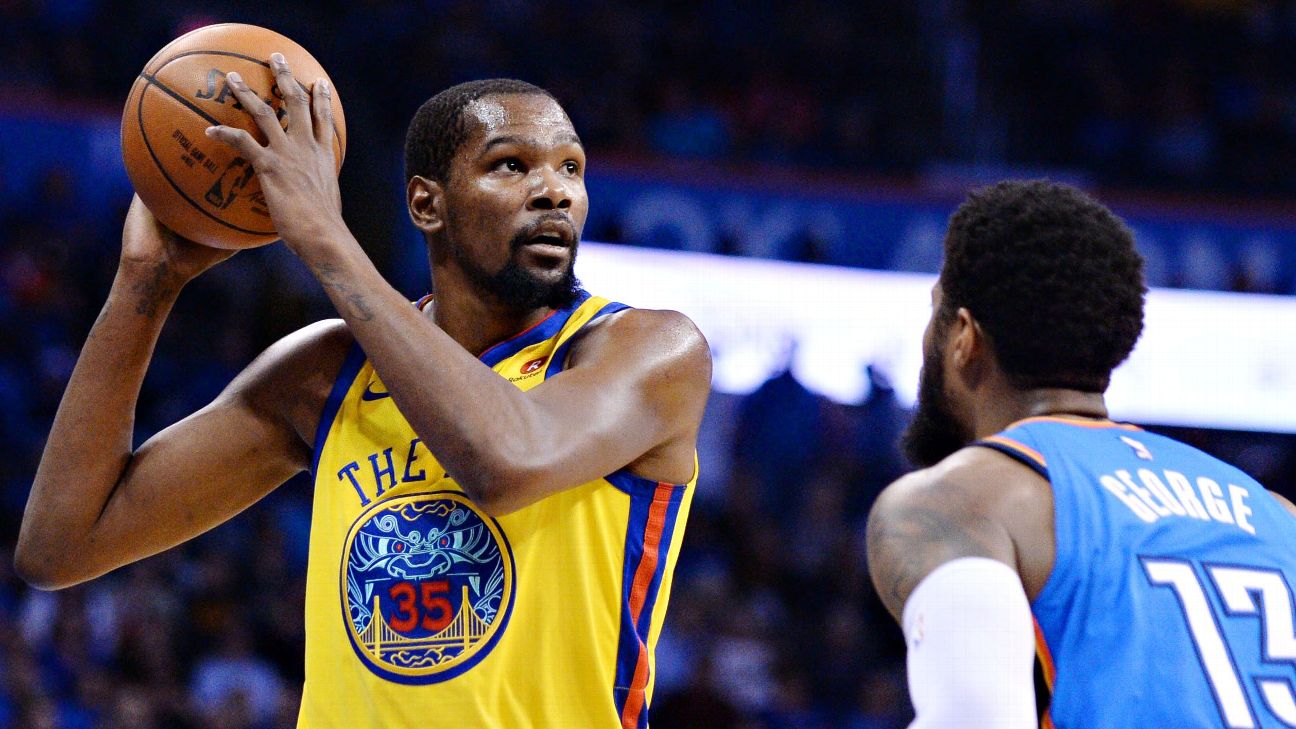 Kevin Durant will stand on the floor at Oracle Arena on Tuesday night and watch another banner lifted into the rafters and wait for another ring to be presented to him, this time with the slight discomfort of his former team in the building on the same night.

The Golden State Warriors and Oklahoma City Thunder share a strange, awkward bond, with it less a rivalry and more sympathetic schadenfreude. Durant left the Thunder to join the Warriors, a seismic moment in NBA history, altering the trajectory of one franchise, and enhancing the other.

But as the Warriors kick off their final season in Oakland, the bittersweet taste of their pending move across the bay lingering over it, like the Thunder experienced themselves, Durant's uncertain future and the growing rumbles surrounding it will blanket everything else.

There has been swelling noise Durant could leave the Warriors next summer, with connected insiders dropping hints and close associates either backing them up, or not outright denying them. And speculation goes back even further: In the days following Durant's departure from OKC, those close to him predicted the Warriors wouldn't be his final career stop.

But it's not even an open secret that Durant will consider leaving the Warriors next summer; it's just reality. And it's been that way since he signed another short-term deal in July (a two-year contract, with an opt-out after this season).

There's no financial incentive this time around, no 10-year threshold to hit. Another one-year deal next summer could give Durant full Bird rights in 2019, allowing him to sign a five-year max, but if he had his eye on that he would've signed a two-plus-one. (The cap jumping from a $109 million to a projected $116 million could be financially beneficial to a small degree, but that projection wasn't when Durant signed.)

The actual incentive behind another single-season deal, as Durant said himself, is to keep his options open.

"I could have easily signed a long-term deal but I just wanted to take it season by season and see where it takes me,"Durant told ESPN's Nick Friedell a few weeks ago. "And I think this year is going to be a fun, exciting year for us all. I'm looking forward to just focusing on that and we'll see what happens after the year."

Durant has reiterated that he loves the Warriors, loves the Bay Area, loves his teammates and, obviously, loves winning. He has repeated the focus-on-this-season platitudes and will recite every line possible to keep the questions at arm's length.

"With that being said, I really don't know what's going to happen this summer."

For OKC fans, this should sound all too familiar. It was a carrot to the fan base, enough to quell concerns and provide apparent reassurance that he would stay:I love it here, OK? So quit asking and let me play.

But there was always the fine print that left the door ajar for something else. It's hard to fight the urge to decode and interpret every phrase Durant says, as if he's leaving one single clue that reveals his plans. Reality is, though, he hasn't decided anything and likely won't until sometime in June or July of next year.

That sounds like possible reassurance for the Warriors, but that's the kind of thing that kept the Thunder up at night, knowing Durant's feelings today might not be the same tomorrow. Before the 2015-16 season, he was affirming his love for the Thunder and privately stated his intention to re-sign with them. By the end of it, he felt differently.

"So I know the questions are going to come," he said. "I know a lot of people are going to speculate and print rumors and sources, but nobody's heard from me about anything, so it's just all speculation at this point."

Few players can play through outside noise and distraction like Durant. His last few seasons have basically been one long Beats commercial as he has blocked waves of chatter -- at least when he steps on the court. The basketball court is his safe place, and Durant can separate the real-life anxieties of career unknowns from doing his job at the very highest level.

That has not been the case for the Warriors, though. There have already been plenty of awkward moments, like Bob Myers' paper-cutting comment at the victory parade, or play-by-play announcer Bob Fitzgerald's attempted joke that fell very flat.

Those around the Warriors have described a "vibe" about the unspoken future of Durant. They can all laugh it off, but as Sam Presti said before Durant's final season in OKC, they weren't going to bury their heads in the sand.

One question the Thunder asked themselves throughout Durant's final season was if his decision would be outcome-based. Was it title or bust? Finals or bust? They told themselves Durant wouldn't be irrational with his decision and make it based on what happened, but instead that he would make it based on what could happen. But Durant even said after joining the Warriors, he wouldn't have picked them had they won Game 7 against the Cavs.

So what's the best outcome for keeping Durant? Is it the opportunity for a four-peat next season? Is it actually losing in the Finals because the drive to right that wrong will draw him back? The Warriors have the allure of the sparkling Chase Center and move to San Francisco. Is that enough?

There's the element of winning a third straight with the Warriors to go three-for-three, say goodbye to Oracle and Oakland, and leave the Warriors in a position less assured, thereby retroactively validating the titles. If the Warriors don't win without Durant, then the conversation becomes that they needed him all along. These are all the kind of things Durant and his inner circle will discuss next summer, along with market, basketball fit, business opportunities and a myriad of other factors.

In the end, the Warriors might very well win again in another Durant sweepstakes. They recruited him once; and now they're going to spend an entire season doing it again -- with winning as the ultimate draw.

Durant has spent his life in transition, andhe's not afraid of it; He has changed high schools, changed cities, changed agents, changed teams. The question many have been asking and will continue to ask throughout this season as rival teams prepare pitches and hope to secure an offseason seat at the table is, what does Kevin Durant want? He moved to the Warriors for a variety of reasons, and it's hard to see how they didn't check basically every one of those boxes.

He has two championship rings and two Finals MVPs. He has played in an offensive system he has always dreamed of. He has great teammates around him that fit his personality. He has entrenched himself to the Bay Area community and found footing in a variety of off-court business ventures. And yet, he remains on one-year deals.

So what does Durant want? That's the question he'll try to answer, once again, next summer. 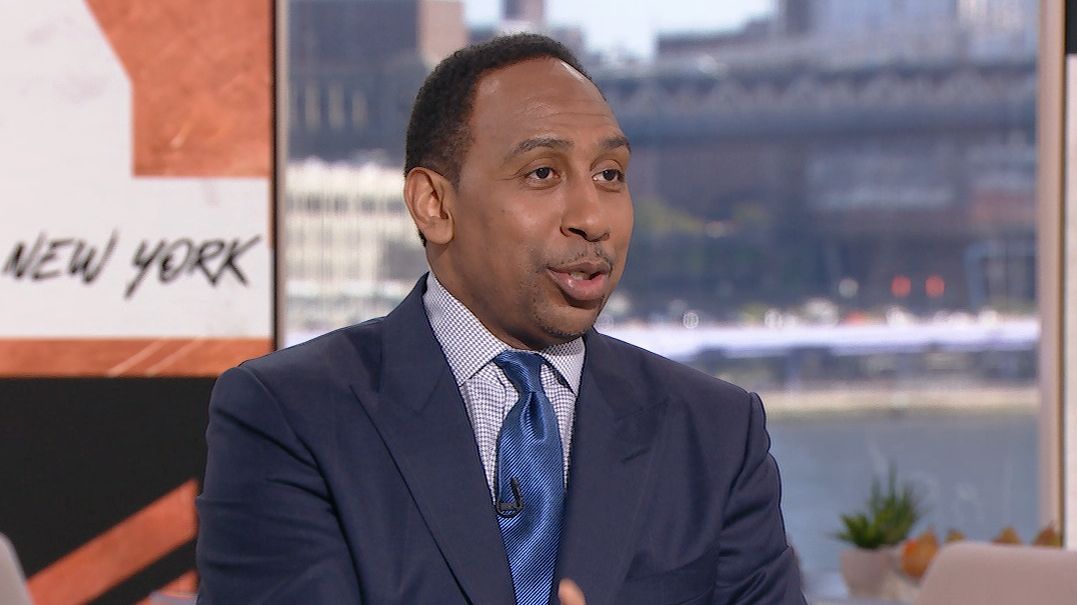