Nissan's custom 'Star Wars' vehicles will take you to a galaxy far, far away 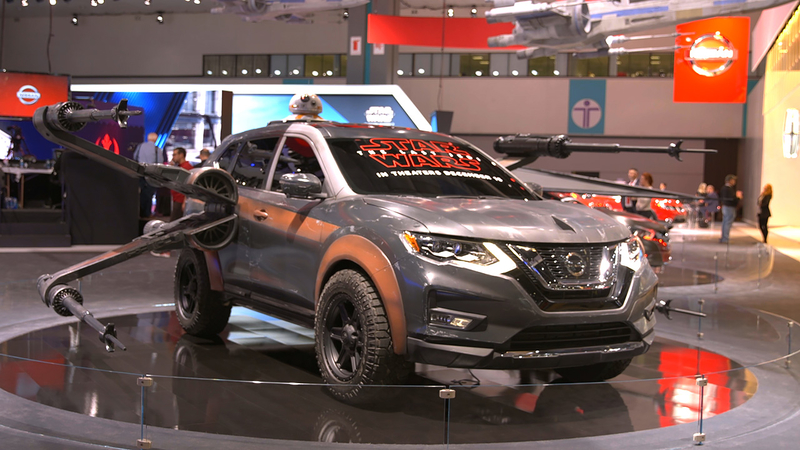 LOS ANGELES -- "Star Wars: The Last Jedi" might take place in a galaxy far, far away, but Nissan brought a fully immersive and visually breathtaking taste of the film's universe to fans at the Los Angeles Auto Show by bringing to life seven of the film's most memorable characters and vehicles.

Ahead of the film's Dec. 15 release, Nissan and Lucasfilm called upon visual effects studio Industrial Light & Magic and custom vehicle outfitter Vehicle Effects to take seven of the automaker's most popular vehicles and trick them out with custom wraps, accessories and lights inspired by the Star Wars universe.

"It's not about logo slapping, it's truly about a celebration of the passion point of the film and the technologies and the future that we see with Nissan," Jeremy Tucker, Nissan North America's Vice President of Marketing, Communications and Media, said of the collaboration.

First up was a 2018 Nissan Altima inspired by the film's Special Forces TIE Fighter. The sporty black sedan was decked out with a multi-paned cockpit window over the windshield, custom wheels designed after the TIE Fighter's centerpiece and a black and red body wrap. It goes without saying that no TIE Fighter is complete without its iconic blaster sounds, which played through speakers on the corner of the car.

Two 2018 Nissan Maximas paid homage to Force warrior Kylo Ren; one to the character himself and the second to his TIE Silencer. The Kylo Ren-inspired Maxima featured a fittingly dark black matte wrap alongside piercing red headlights and pulsing underbody lighting reminiscent of Kylo Ren's lightsaber. The vehicle's body was also decked out with a custom front lower spoiler.

The second Maxima, a TIE Silencer, was a force to be reckoned with, featuring laser canons and wing-mounted missile launchers attached to the sedan. The TIE Silencer's grille and underbody lighting also shared the same crimson hue as Kylo Ren's lightsaber, and custom speakers played sound effects from the films for fans at the show.

A team of female designers and engineers were the masterminds behind the Captain Phasma-inspired Nissan Maxima.

A third Nissan Maxima was fit for none other than First Order Stormtrooper Captain Phasma herself. The sedan's high-gloss silver armor featured custom, hand-crafted aluminum bodywork and a red accent line running the length of the vehicle.

In an homage to Phasma's role as a strong female lead in the films, Nissan paired up a female artist from Industrial Light & Magic with the female engineer heading up the Maxima team to design the show car.

"Together, they brought this show vehicle to life. It's a true testament to combining this amazing Maxima and its aggressive lines with the amazing warrior of Captain Phasma and an incredible story of female empowerment," Tucker said.

BB-8 even makes an appearance in the Poe Dameron-inspired Nissan Rogue.

The 2018 Nissan Rogue inspired by Poe Dameron's X-wing could have easily lead the New Republic Starfleet with its menacingly massive wings, illuminating thrusters and quad laser cannons. BB-8 fans even got a glimpse of Dameron's sidekick as a life-size droid with fully functioning lights and sound effects popped in and out of the Rogue.

The Nissan Rogue Sport was the perfect choice to bring an A-wing to life.

Of course, no Star Wars experience is complete without an A-wing, which was brought to life as a 2018 Nissan Rogue Sport featuring laser canons, illuminated thrusters and top-mounted fins modeled after the Starfighter. The Rogue's wheels and several accent panels on the vehicle's body were painted blue to match the A-wing, and the SUV even got a wider stance thanks to its custom wheels.

But the biggest reveal was saved for last. On a stage guarded by Stormtroopers, four large black walls opened to reveal a 2018 Nissan Titan designed after the AT-M6, the largest vehicle in the First Order's arsenal.

The Titan, also the biggest vehicle in Nissan's fleet, carried in its cab a colossal megacaliber cannon. Long legs are one of the most notable features of the AT-M6, and they were recreated for the Titan with a one-foot lift kit and hydro-dip wheel graphics mimicking the walker's leg joints. And while the Titan might not have been moving, an 18-inch subwoofer and surround sound system recreated the walker's reverberation.

Above the custom vehicles, a fleet of X-wing Starfighter replicas hung over the show floor. Nissan also offered an augmented reality experience and a Stormtrooper photo opportunity for Star Wars fanatics.

"Technology such as electrification, autonomous driving and safety features can feel like technology from a galaxy far, far away. Star Wars gives us a unique cultural shorthand that lets us break it down and show it in a way that consumers understand," he explained, adding that fan response to the collaboration has been "off the charts."

For fans who couldn't make it to the Los Angeles Auto Show - where Nissan also debuted its all-new subcompact SUV, the Nissan Kicks - the automaker is taking the seven vehicles on a coast-to-coast tour to celebrate the magic of the Star Wars franchise. Select vehicles will be displayed along Hollywood Boulevard for the premiere of the film while others will travel with Nissan to auto shows across the country.