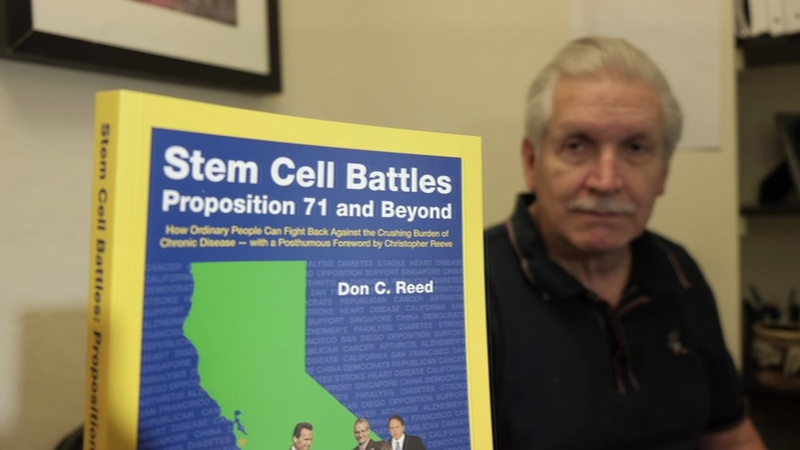 FREMONT, Calif. (KGO) -- There is a new book about to hit store shelves about stem cell research. The subject might seem a bit dry to the uninitiated, but that's likely to change when you meet the men behind it.

Don Reed works in an office that would be small for most closets. "I don't know, maybe six foot by eight and yes I would like to change the world," he said.

A world that changed when his son Roman's world did back in 1994. "In one second I went from being able to bench press 430 pounds to zero," Roman said.

Hence the creation of a father-son tag team fighting for stem cell research. Roman as it applies to paralysis and Don for the broader applications. "I've met so many people with so many illnesses, conditions, diseases and they've all been told the same thing that there is no hope, but there is hope. California stem cell program is hope personified," Don said.

They helped pass Proposition 71 together, which made stem cell research a constitutional right.

Their work has even taken them to the White House and they are still not finished. Especially Don, who is about to release a book. "It was the kind of book I wish had been available when my son was injured," Don said.

You may think a book about stem cell research would be dry, but not this one. It's about people, their battles, their struggle and their solutions.

"Stories, there are 71 stories, I picked that number because Proposition 71," Don said. Roman's story is included in the book. The son traveling a road through life he never imagined a long way from the NFL and embracing a greater good. "Now I am helping cure people. Before I was trying to play football to help myself, now I'm helping others. That's way better," Roman said.