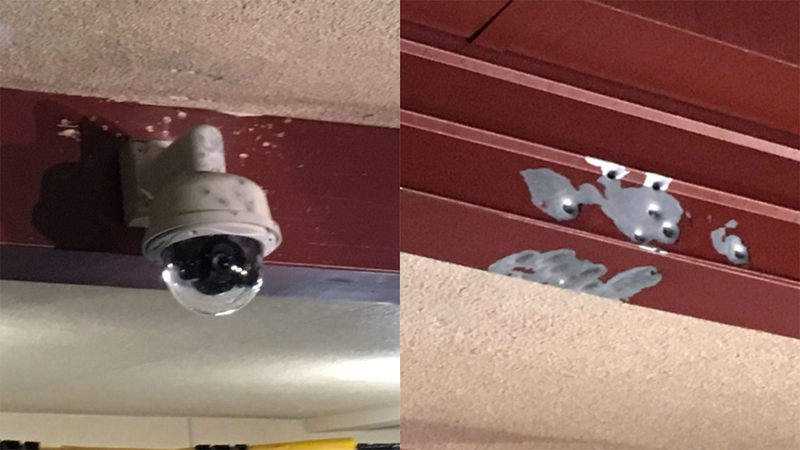 SAN JOSE, Calif. (KGO) -- For the second time this month, a surveillance camera was shot out at a San Jose elementary school. This time the neighbors caught the shooter in the act.

Police swarmed the Willow Glen neighborhood overnight setting up a huge presence near Booksin Elementary. Surveillance cameras caught video of the shooter and police are looking at that now.

It was a rude awakening on a Tuesday morning in this San Jose neighborhood.

"We just heard the first shot and we both went outside to see what it was," said Karen Scherrer, witness.

Karen Scherrer and her husband Bill saw the man, with a shotgun, taking aim at Booksin Elementary School on Booksin Avenue and Dry Creek Road.

"I saw the gunman shooting out the main camera underneath the library. You can see the camera shot out," said Karen.

Karen and Bill both starting chasing the gunman -- against the advice of the police dispatcher.

"I started hyperventilating, I said, he's pointing it at me. He's pointing at me. She said can you hide behind a tree? Or what can you do? And so I hit the ground," said Karen.

The gunman escaped their grasp as police swooped into the area and set up a perimeter. They blocked off roads around Booksin Elementary and went door to door looking for the gunman. After searching for less than two hours officers deemed the neighborhood was safe.

This is the second time this month Karen called police about gunshots at Booksin Elementary school. The campus was hit with this same type of vandalism more than two weeks ago over the Veterans Day weekend. A different surveillance camera was damaged by gunfire.

"I think it's more concerning that it happened again," said Eileen Lindsay, parent.

"Anytime you have any type of gun violence no matter where it is it's troubling. Especially if it's on a school campus, especially given the times that we're in right now. So, the parent concerns are completely understandable. Completely justified," said Peter Allen, San Jose Unified School District Spokesman.

There has been a big police presence around Booksin elementary. District officials say they've also requested more patrols for after school activities.

San Jose Police say the report came in a man with a shotgun/long gun running down Booksin Avenue. A woman called it in and said shots were fired as another man chased him. Police working to confirm shots were fired. pic.twitter.com/f2dZM5TOyU