Northbound lanes of I-880 reopen in Oakland after crash; woman arrested 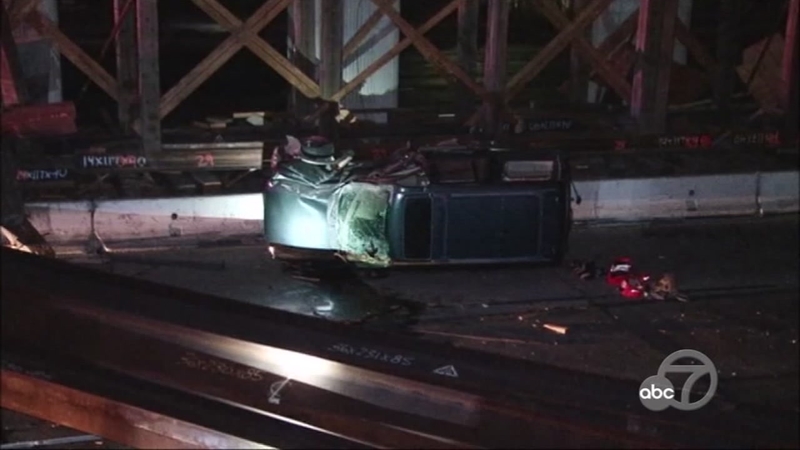 Northbound lanes of I-880 reopen in Oakland after crash; woman arrested

OAKLAND, Calif. (KGO) -- The northbound lanes of I-880 were reopened just before 11 a.m. after a Hayward woman crashed into support beams, according to the CHP. The driver was arrested on suspicion of DUI.

Thousands of drivers on I-880 Northbound in Oakland got stuck, suffering the consequences of unbelievable traffic mess. The CHP says the driver of a Ford Expedition was going about 100 miles per hour when she crashed.

"The driver, a 28-year-old woman from Hayward drove her Ford Expedition up on a freeway K-rail colliding with the support beams, supporting steel girders under an overpass," said CHP Officer Matthew Hamer.

The impact of the crash caused three 80-foot long steel girders, weighing tons to crash down onto northbound lanes. Remarkably, the SUV came only feet from being crushed, the driver was not seriously hurt but now faces serious charges.

"She has since been arrested for suspicion of driving under the influence of alcohol," said Hamer.

The steel girders were temporary, part of the new 23rd Ave. overpass project.

Caltrans says the new bridge was inspected and is safe. The crash did not damage the bridge's structural integrity.

"Those beams were support beams so they're not part of the main structure," said Caltrans spokesperson Vince Jacala.

All lanes of Northbound 880 were shut down for hours so Caltrans could remove the girders. Traffic was detoured off at 23rd Ave. The traffic backup stretched for miles, quickly becoming the stuff nightmares are made of.

"I made a quick stop at Walmart, I would've taken side streets if I had known this, It's crazy bro," said Posey.


Before you head out to your car, be sure to check out the ABC7 traffic maps for real-time information to help you navigate through traffic jams.
Report a correction or typo
Related topics:
trafficoaklandcar crashchptraffic accidentroad closurecrashtraffic delay
Copyright © 2021 KGO-TV. All Rights Reserved.
More Videos
From CNN Newsource affiliates
TOP STORIES