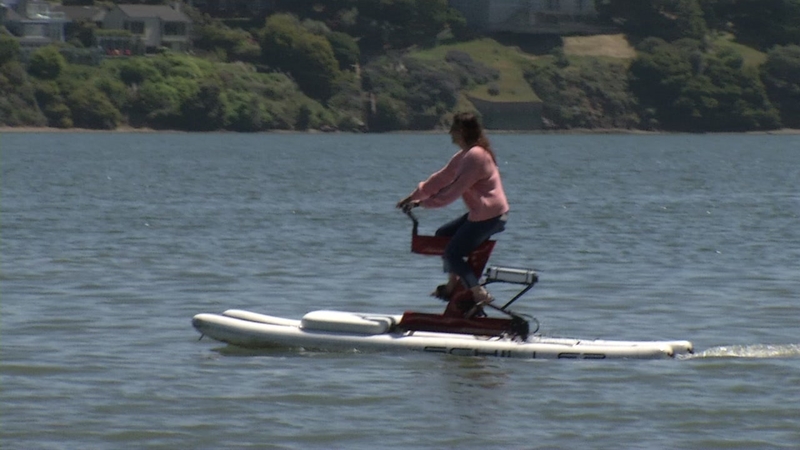 SAN FRANCISCO (KGO) -- Frustrating. Long. Slow. Those are often words to describe commuting in the Bay Area. But soon, there will be a new way to get to work that many haven't seen before. It's not by land or underground but by personal water bike!

Part scaled-down catamaran, part bicycle, the electric Schiller bike can go up to 12-miles an hour and is about to be rolled out in a pilot ride sharing program in the Bay Area by late summer.

Fuggedabout traffic congestion! 🚗 The ⭐️ NEW ⭐️ way you can soon get to work! Taking a spin on @schillerbikes (YES I did this in a dress 👗!) 😊 pic.twitter.com/z1dBgUFEWj

"I had this idea five and a half years ago for an alternative transportation stunt in San Francisco, riding across the San Francisco Bay from Oakland to Pier One. It's better than sitting in traffic!" explained owner and founder Jessica Schiller.

But that stunt quickly turned into a an obsession and a dream.

"I started designing and working with a group of talented industrial designers, mechanical engineers, and really an all-star team... and since then it's been a long journey of innovation and invention."

Once a working version was ready for market, interested customers started pouring in from pretty much everywhere.

"As far away as Kuwait, Dubai, Germany, Mexico, Japan...really...thousands of bikes around the globe!"

Now that the bikes have been modified with electric assist, they're ready to be part of a pilot program late this summer which will allow users in the East Bay ride from Alameda to Jack London Square in about 60-to-90 seconds.

Undoubtedly a more enjoyable and shorter time than sitting in traffic. However, the Schiller isn't recommended to cross the bay entirely, due to the rough waters and other watercraft.

"It's pretty rough. What we do plan to do is have stations along the Embarcadero so people can go from station to station."

The company is currently scouting other locations for the bikes and expects a full roll-out of the sharing program by 2020.

ABC7 news anchor Dion Lim found the ride itself quite smooth and stable. The learning curve is similar to an electric bicycle with 9 assist-levels and as a bonus can be either ridden sitting like a traditional bike, or used while standing on a platform on either side of the vehicle. Schiller says zero users have fallen into the water since the bikes were invented.

Jessica Schiller has ambitious plans for the future.

"We're looking city by city...we're actually thinking nationally and globally in the world's largest and most congested cities. They're often situated on bodies of water."

Expected cost depends on location but should be around $4 for the first 10 minutes and 99-cents per minute after that.