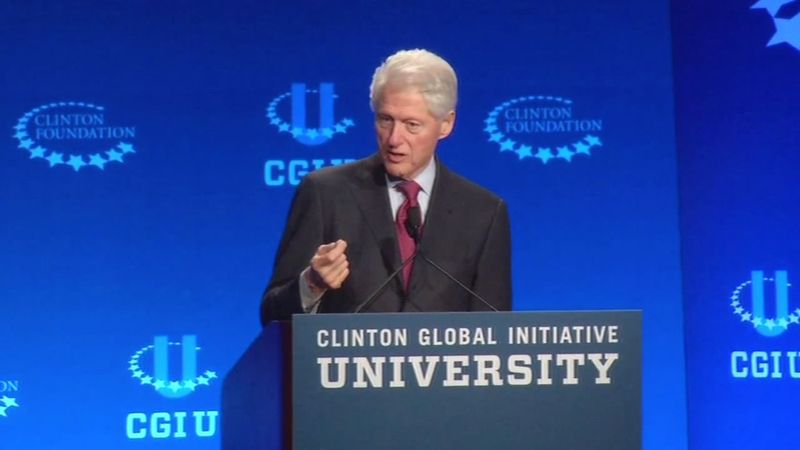 BERKELEY, Calif. (KGO) -- The University of California Berkeley Friday hosted not one Clinton, but two.

Former president Bill Clinton and his daughter Chelsea, were at the university to address students and faculty, but Friday night's appearance didn't come without an interruption.

"As a Stanford alum, I can't believe I am happy to be at Berkeley," Clinton said.

One thousand student leaders seeking solutions to world issues, such as poverty, pollution and human rights.

"I hope that what will be clear to all of you at the end of the weekend is that we believe that no one is ever too old or too young to make a difference," Clinton said.

Her father, Bill Clinton, challenged students to make a difference in their communities and never be afraid to fail

"Reminds me of what Winston Churchill once said about the United States, he said we always do the right thing after exhausting every alternative," Bill Clinton said.

Outside, protesters blamed Clinton for his 1994 crime bill, which they say cause the prison population to explode. One heckler got inside and interrupted the former president.

"We are not at a political event, so I will not answer that," bill Clinton said.

At the forum, entrepreneurs and activists urged everyone to be proud and vocal about who you are.