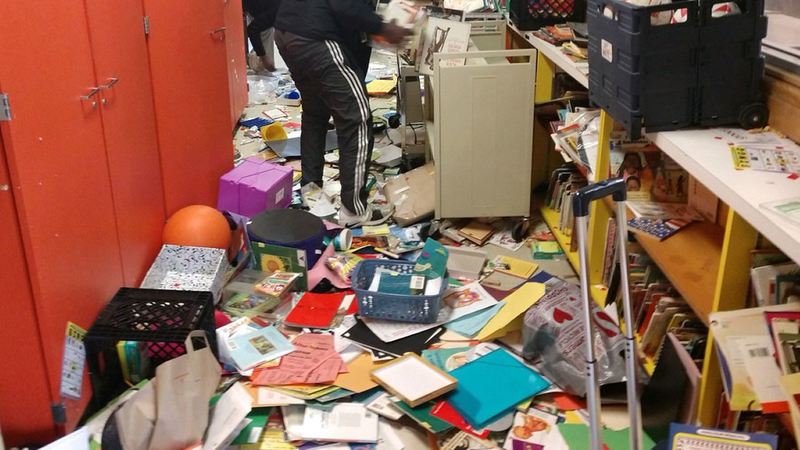 OAKLAND, Calif. (KGO) -- Someone trashed the campus shared by two Oakland elementary schools and the damage is extreme.

Walls covered in paint, more than 10 windows smashed, and a toilet destroyed by a massive rock. That's the scene students at Manzanita Community School and Manzanita SEED walked into Tuesday morning.

#ABC7now | Check out this toilet in the girls bathroom. It was smashed with the massive rock you see here. (Zoom in)
OUSD police says they’re looking for the vandals who inflicted thousands of dollars in damages to Manzanita Community School. @abc7newsbayarea pic.twitter.com/pye4t3NeJ2

"Computers, toilet, certainly a lot of supplies that have been destroyed. We are talking about thousands of dollars. That doesn't include the people hours. They had to come in really quick and clean up," said OUSD spokesperson John Sasaki.

Todd Davis knew it was bad when he saw the lights were on inside his library.

"I had beets in my refrigerator and they were thrown on the ground and half a container of apple sauce was eaten. I don't know where they got it, but they ate at the library and poured it on the counter," said Davis.

#ABC7now | Paint splattered all over the walls, floors, and chairs of this courtyard. @OUSDNews said they’re investigating this vandalism case at Manzanita Community School. @abc7newsbayarea pic.twitter.com/2QRgb4Ea3x

Minutes after seeing the mess in the courtyard, Davis, along with other teachers and students, discovered the mess inside the hallway that leads to the basketball court.

"The hallway was 2 feet of debris that had just been pulled off shelves, and a classroom that is far away from here was entered and rocks -- the little marbles that students collect for good behavior -- was thrown on the floor," said Davis.

Based on the pattern of the vandalism, teachers believe the vandals checked every single door and gained access to rooms that are normally unlocked. The staff room was also ransacked.

#ABC7now | This is the mess teachers and students walked into this AM at Manzanita Community School in Oakland.

Books tossed all over this hallway and courtyard. Paint splattered on the walls and broken windows across the school. @abc7newsbayarea pic.twitter.com/TFhjdvh0O8

"It's a reminder of violence or other things that might have happened in the neighborhood and community. We want to make sure they are feeling safe because this is usually their safe haven," said Jasmin Garcia, Manzanitas social worker.

Teachers are using this experience to teach students an important lesson. "Would you guys do this? NOO! How will you treat your school? Good!"

Tuesday was the first day of class since March 22. The schools were closed for Spring Break, the week of March 25, and for Cesar Chavez Day on April 1.

The vandalism did not keep students from learning Tuesday. None of the classrooms were damaged so students were still able to attend class.