'I will help': Pres. Trump pledges to pay for Vanessa Guillen's funeral 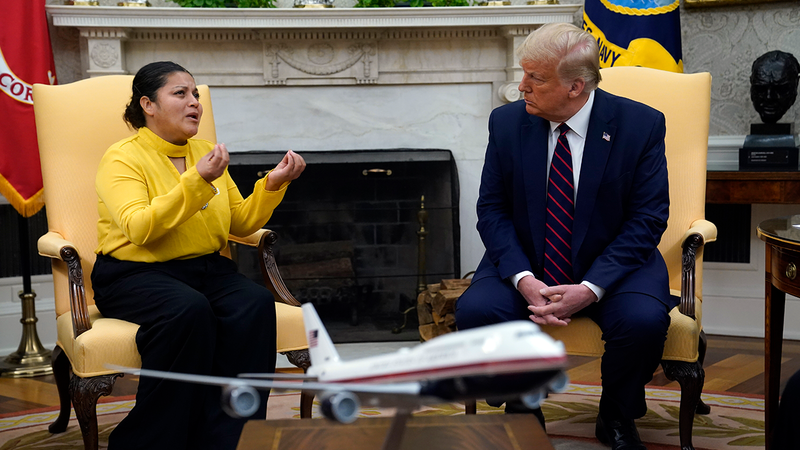 WASHINGTON, D.C. -- During a meeting between Vanessa Guillen's family members and President Donald Trump at the White House on Thursday, the president told them that they have his support and that he will personally help with funeral expenses.

"If you need help with the funeral financially, I will help," the president told the family in the Oval Office.

Before the meeting, family members expressed their purpose on taking Vanessa's story to the top.

Ahead of the meeting with the president, several dozen demonstrators joined the family at a rally calling for Fort Hood officials to be held accountable for Guillen's death and for better investigations of harassment in the military.

Supporters marched from the rally at the U.S. Capitol to the White House.

"We are here to demand justice for Vanessa," said the family's attorney, Natalie Khawam.

"Not only does the family grieve, Houston grieves. The nation grieves," said @RepSylviaGarcia. The lawmaker questioned the inspection's report & asked when does the military investigate sexual harassment claims. I'll have LIVE reports this afternoon on #abc13. #vanessaguillen pic.twitter.com/J3OP1otsAF

The proposed, #IAmVanessaGuillen bill, would let service members file sexual assault and harassment claims to a third party, rather than their chain of command.

The bill comes after hundreds of Fort Hood service members have come forward with their experience on the base.

On Wednesday, lawmakers held the first congressional hearing regarding Vanessa and sexual harassment on the base.

"In an institution that prides itself in cohesiveness to leave no soldier, we are failing," said California Congresswoman Jackie Speier.

Supporters are hoping by making their voices heard, Vanessa's won't be lost.