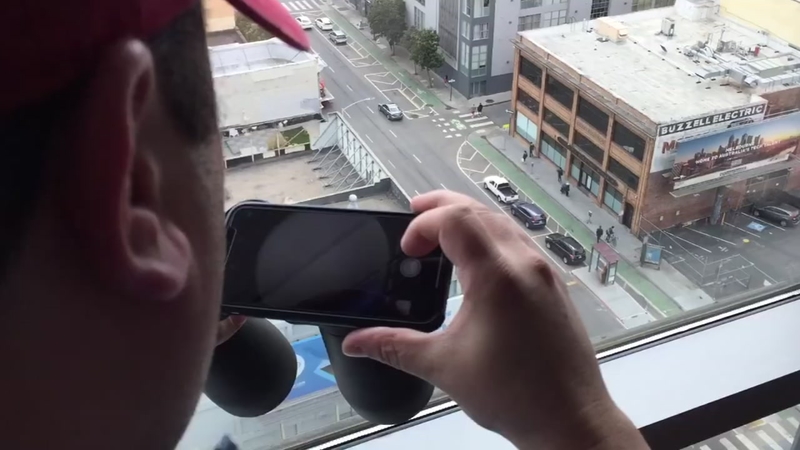 SAN FRANCISCO (KGO) -- A San Francisco man fed up with watching blatant drug dealing, drug use and crime happening on the street corner right across from his apartment decided to do something about it by turning to social media.

"I wake up every morning to this million dollar view and then I look down to the madness of San Francisco," he said.

The man doesn't want his identity revealed. But his social media handle "Streets of San Francisco" on Twitter and Facebook documents a bus stop on one street corner near Mission and 8th streets over a period of months.

"Myself and other neighbors have been watching this area for many years, but over the last year and a half it has got aggressively worse," the man told ABC7 news.

He says he turned to social media, tagging police and city politicians in every post hoping that someone would see it and do something about it.

Dozens of photos and videos taken by the man show drug users passed out at the bus stop and in one case lying in the bike lane of the street. Other images show people he claims are drug dealers and in some images apparently drug deals appear to be happening.

"I'm watching a drug epidemic that's out of control," he says. "It's a drug craze."

In one series of images from Friday morning, the photographer documents one man using intravenous drugs and then passing out at a bus stop.

A short time later another tweet shows another man appearing to rob the passed out drug user.

After seeing this, the photographer says he called SFPD narcotic hotline and directed them to help detain the robbery suspect. Police confirmed to ABC7 News that they did arrest a person on suspicion of robbery after receiving a tip.

While ABC7 News was interviewing the photographer, reporter Wayne Freedman witnessed an apparent drug deal go down at the same bus stop documented on the social media pages.

Armed with binoculars and an iPhone, @sfstreets1 sees drug deals before they go down...waits, records, and sends the files to SFPD. He's almost prescient. #abc7now Wants to clean up the streets and neighborhoods from drug dealing and crime. Recorded a robbery this am pic.twitter.com/kvouJ8YLbu

ABC7 News reached to police for comment on this situation and they confirmed that they have made "multiple arrests" in that area related to drug dealing.

The anonymous photographer doesn't blame officers for the apparent lack of action.

"At the end of the day it's not the local police it is the politicians, the people making the laws, creating the laws that gives the police the right to not only arrest these people but convict them and get them in jail or rehab," he said.