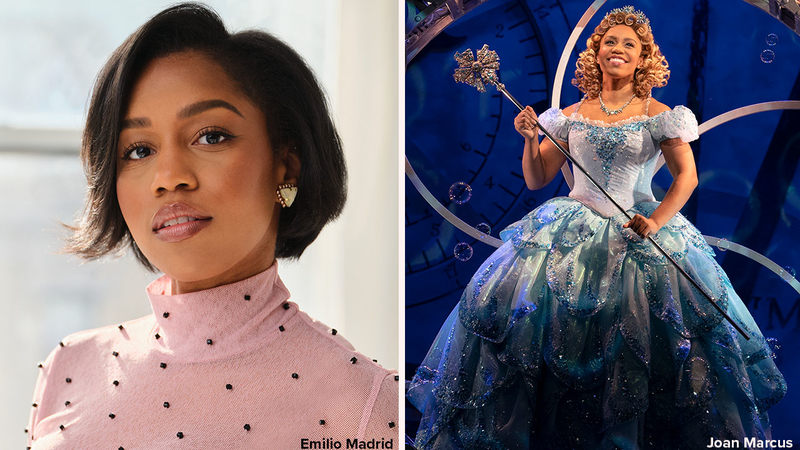 NEW YORK -- The Broadway show "Wicked" made history this Black History Month, as Brittney Johnson became the first Black actor to take on the role of Glinda full time in the show's 18-year history.

She made her debut earlier this month after performing as the Glinda standby, becoming the first actress of color to play the part on Broadway.

"I couldn't hear anything except for people cheering," she said. "That's it. I couldn't hear the orchestra, and you can't see because the spotlights are shining right on you."

Oh what a celebration we had tonight as @sunnybrittney floated into Oz as Glinda on Broadway. #WICKED pic.twitter.com/QMpYuZz5vt

Johnson has been busy since graduating from NYU's Tisch School a decade ago, appearing in a variety of different musicals, but "Wicked" represents an important milestone.

She has appeared on Broadway in "Les Misérables," "Motown," "Sunset Boulevard," "Beautiful: The Carole King Musical," and "Kristin Chenoweth: For the Girls," and she succeeds Amanda Jane Cooper in the role. Johnson said that she's "honored, grateful, and speechless."

She joked that the first week in her new job has been the longest in her life, "because so much has happened."

"It was one of those moments where you have to be Glinda," she said. "You're Glinda right now. You're not Brittney. You're Glinda, because if I'm Brittney, I'm going to cry."

She'd played the role before as an understudy, going on a few times starting in 2019, when the performer hired to do the job wasn't available. But the milestone means even more to Johnson as Broadway springs back to life.

"Everyone is excited to be back in a theater period post-COVID," she said. "But there is something that happens to you when you get to see yourself represented onstage, and it's important for people to see what is possible for them."

She knows the importance of that first hand:

"The first Broadway show that I saw was '110 in the Shade' with Audra McDonald," she said. "That was the first time I recognized myself onstage. I realized there was a place for me."

Today, she inspires her young fans in the same way.

"They say things like, 'I never thought it was possible for a person of color to play this role, and now, because you're playing it, I know I can too one day,'" she said. "They just say their dreams have been reawakened because they see what's possible now."

Sandy Kenyon has a preview of the local contestants competing on American Idol Season 20.

Dreams re-awakened is part of the magic of Broadway, a Broadway that is changing for the better. The avenue is known as "The Great White Way," which is meant to describe its lights but sadly took on another meaning for decades.

Now, the theater district is, to use the words of Brittney Johnson, "all sorts of different."

"Wicked" is performed in the Gershwin Theatre. CLICK HERE for ticket information and more details on the production.