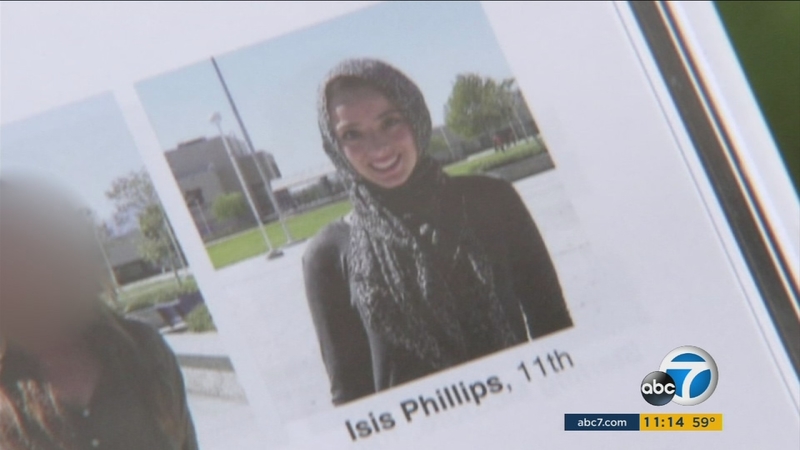 RANCHO CUCAMONGA, Calif. -- Yearbooks are on sale at Los Osos High School in Rancho Cucamonga - a keepsake for many graduating seniors.

But to one student photographed wearing a hijab, the yearbook is an insult.

She is not 11th grader Isis Phillips. But that's how her picture in the yearbook identified her.

She posted the picture on Facebook with the caption:
"I am extremely saddened, disgusted, hurt and embarrassed that the Los Osos High School yearbook was able to get away with this. Apparently I am 'Isis' in the yearbook. The school reached out to me and had the audacity to say that this was a typo. I beg to differ, let's be real."

ABC News is not releasing the teen's real name, because a friend tells us she and her family are not ready to address the media at this time.

Trevor Santellan, one of the students who worked on the yearbook, said there actually was a student named Isis Phillips at Los Osos who transferred earlier in the year.

The school's yearbook account has tweeted an apology, saying it was an unintentional mistake.

"We are extremely sorry for what occurred in the Yearbook. ... It is our fault and this is absolutely inexcusable on our part," the tweet said.

The school principal has also apologized and said the mistake is being investigated.

LOHS is taking every step possible to correct & investigate a regrettable misprint discovered in the yearbook. We sincerely apologize.

"We are investigating to figure how this happened and we are certainly sensitive to the young lady. We have been in contact with the family and will continue to work with them to determine how this could happen and how we can remedy the situation."

The Council on American-Islamic Relations has been in contact with the student and her family and said she will likely not return to school "until the issue is resolved appropriately."

CAIR-LA said in a press release Sunday it is calling for a thorough investigation of the misprint.

"We join with the family in their concern about a possible bias motive for this incident and in the deep concern for their daughter's safety as a result of being falsely labeled as a member of a terrorist group," said CAIR-LA Executive Director Hussam Ayloush. "No student should have to face the humiliation of being associated with a group as reprehensible as ISIS."
Related topics:
los angelesyearbookisishigh schoolmuslimssocietystudents
Copyright © 2021 KABC-TV. All Rights Reserved.
TOP STORIES
LIVE: ABC7's Drew Tuma on Bay Area storm watch
POWER OUTAGES: More than 130K without power in Bay Area, PG&E says
Storm updates: List of Bay Area evacuations
AccuWeather Forecast: Atmospheric River is here
CLOSURES: Oakland Zoo, Alameda County Fair closed due to storm
LIVE: Track rain in Bay Area with Live Doppler 7
Falling tree kills driver in Santa Cruz mountains amid storms
Show More
James Michael Tyler, known for 'Friends,' dies of cancer
Bay Area rain has millions of termites searching for love
Highway 17 in Santa Cruz Co. reopens after police activity, CHP says
Can authorities prove if Brian Laundrie killed Gabby Petito?
How common are accidents in TV and film?
More TOP STORIES News