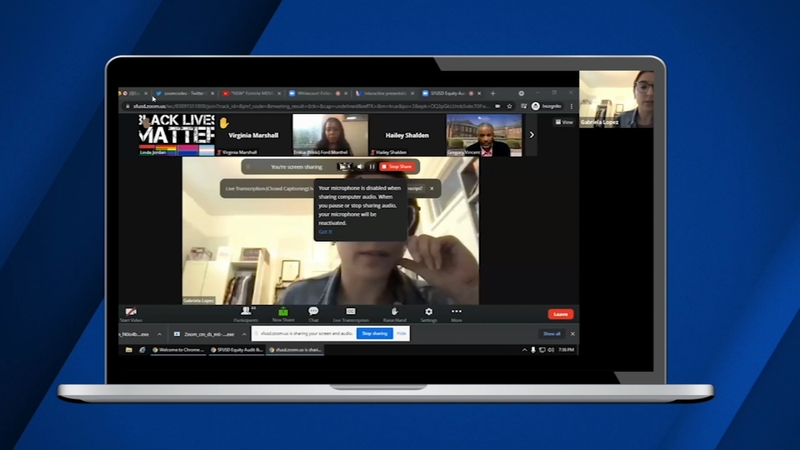 On Friday night, members of the San Francisco Unified Equity Audit and Action Committee are demanding an investigation after the Nov. 3 incident.

"We are being hacked," said one of the committee members during the incident.

"They were attacking individual members, calling them racist names and using the N-word and other horrific language and before we were able to mute them and kick them out of the meeting they began showing these images," said SFUSD's Board of education president, Gabriela Lopez.

According to Lopez, about 40 people witnessed the zoom attack. One of them was SFUSD parent and volunteer Latoya Pitcher.

Luz Pena: "Do you feel like this incident was targeted towards this committee?"
Latoya Pitcher: "Absolutely. This committee has been under attack since the thought of its inception."

During the incident Pitcher had her computer connected to her living room TV. Her three children witnessed the verbal attack and accidentally saw the pornographic images.

"I don't know how my daughter is processing it right now. I'm definitely worried about it. It's definitely going to require some counseling," said Pitcher.

A similar incident happened in January during an anti-racism lesson at Lowell High School.

"This was in your face. The Black community and all of our allies should not rest until this case," said Rev Amos Brown, President of the San Francisco branch of the NAACP.

Rev. Brown called this attack a distraction from what this committee is accomplishing.

"A major distraction. People can differ and in a civil society there are a variety of opinions but to give persons here in San Francisco who would stoop so low as to trivialize a basic point of equality of opportunity with such insult it's incredible, unbelievable and it needs to be investigated by the FBI, our city attorneys office and our DA," said Rev. Brown.

SFUSD's Board of Education president says they are considering extra layers of protection for their upcoming meetings.

"The people who are behind this have had some ability to remain hidden and we used outside sources in order to do the investigation. So, I've asked for a similar thing to happen in this one," said Lopez and added, "There needs to be a police investigation. I believe we need to see it's linkage to a number of other issues threats, violent behaviors that we've seen around similar discussions."