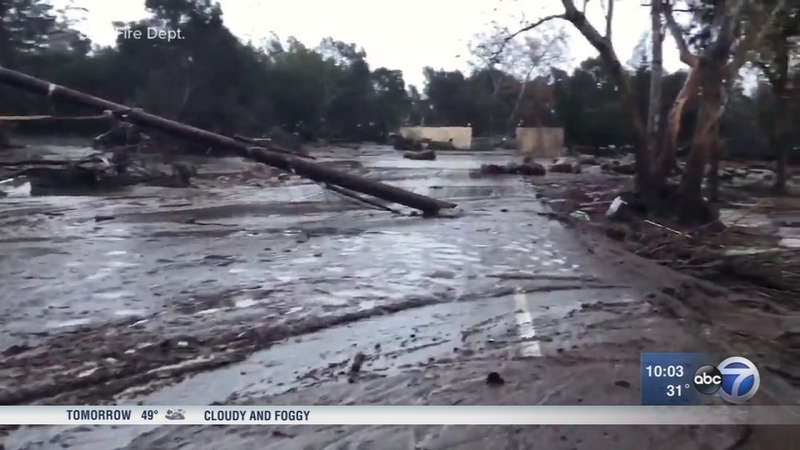 MONTECITO, Calif. -- At least 13 people have died in weather-related incidents in Santa Barbara County, authorities said Tuesday, as the Southland's first major winter storm triggered flooding and mudflows that forced the closure of the 101 Freeway in the Thomas Fire burn area.

Among the victims was Roy Rohter, a Chicago native who owned the first Center 21 franchise in the city. He built the chain to more than 300 offices before moving to California with his family and founding a religious academy in Ventura.

The fatality figure could increase as at least two dozen people were considered still missing as search-and-rescue efforts continued.

"While we hope it will not, we expect that this number will increase as we continue to look for people who are still missing and unaccounted for," Santa Barbara County Sheriff Bill Brown said.

Details of the circumstances were not immediately disclosed. In addition to the fatalities, 25 people were reported to be injured.

Powerful mudslides destroyed homes in the area as rescue crews rushed to search the rubble. The mud was reported to be 5 feet deep in places.

"It looked like a World War I battlefield," Brown said. "It was literally a carpet of mud and debris everywhere, with huge boulders, rocks, downed trees, power lines, wrecked cars, lots of obstacles."

"And challenges for rescue personnel to get to homes, let alone get people out of them."

Firefighters slogged through waist-high mud to pull a muck-covered 14-year-old girl out of the ruins of a home in Montecito, where she had been trapped for hours. She was taken away on a stretcher.

Crews rescued a girl trapped in rubble from a Montecito home amid a powerful mudslide that wiped away multiple residences and shut down roads in the area.

Santa Barbara County firefighters had dogs picking through the muddy remains of homes, looking for any others who may have been trapped.

Fire officials said there have been 50 air-hoist rescues, and dozens upon dozens of ground rescues.

#CAstorm- Santa Barbara County Firefighter’s use a search dog to look for victims where multiple homes once stood in Montecito following flooding due to heavy rain. pic.twitter.com/xZcI4PNmej

Forecasters said the maximum rainfall occurred in a 15-minute span starting at 3:30 a.m. near the Montecito, Summerland and Carpinteria areas of Santa Barbara County. Montecito got more than a half-inch in five minutes, while Carpinteria received 0.86 inches in 15 minutes.

Mud and debris littered roadways and blocked the main line of the Union Pacific Railroad through Montecito.

The California Highway Patrol shut down the northbound 101 at Route 126 in Ventura, and at Seacliff, and the southbound 101 was closed just south of Santa Barbara at Milpas.

The closure was due to flooding, debris flows and an explosion apparently caused by a ruptured gas line, according to authorities.

As of Tuesday afternoon, CHP officials said the closures could last at least 48 hours, depending on conditions.

"Although the rain has stopped, water is still coming down onto the freeway," said CHP Capt. Cindy Pontes. "It's just depending upon the weather and the continuance of water and the debris flow."

Motorists were urged to avoid the area and use the 5 Freeway as an alternative route.

Residents in the area of Carpinteria faced the continued threat of dangerous mudslides after their properties were inundated by mud in the morning hours.

Crews and residents worked together before noon to clear as much mud and debris as possible, but they were forced to leave the affected areas due to fear that another mudslide could happen at any moment.

Mud in many places was up to residents' knees. Several homes sustained damage on Foothill Road, but no serious injuries in the immediate area were reported. Foothill Road was shut down.

Residents said it was still dark when the first of the mudslides hit. "It sounded like a freight train coming down the hill," said John Livergood. "You could hear these boulders rolling down. The whole house was shaking."

Elsewhere in the Thomas Fire's massive burn area, Route 33 was shut down north of Ojai -- between Fairview and Lockwood roads, the highway patrol said.

Caltrans also announced the closure of Route 150 near Lake Casitas.

US 101, SR 33 and SR 150 all CLOSED due to flooding, mud, debris flow and downed wires - AVOID AREA. I-5 over “The Grapevine” is the alternate route for the Central Coast this morning. @CaltransDist7 @CHP_Ventura @CHP_SantaBarb @VCFD @VCPublicWorks @VENTURASHERIFF @CHPsouthern https://t.co/Md2gTUENk0

There were no estimates of when the highways would be reopened.

Welcome to the 101 parking lot! Freeway shut down in both directions, South of La Conchita all the way up to Montecito, due to flooding, mud & debris. pic.twitter.com/Sjwl1csJhH