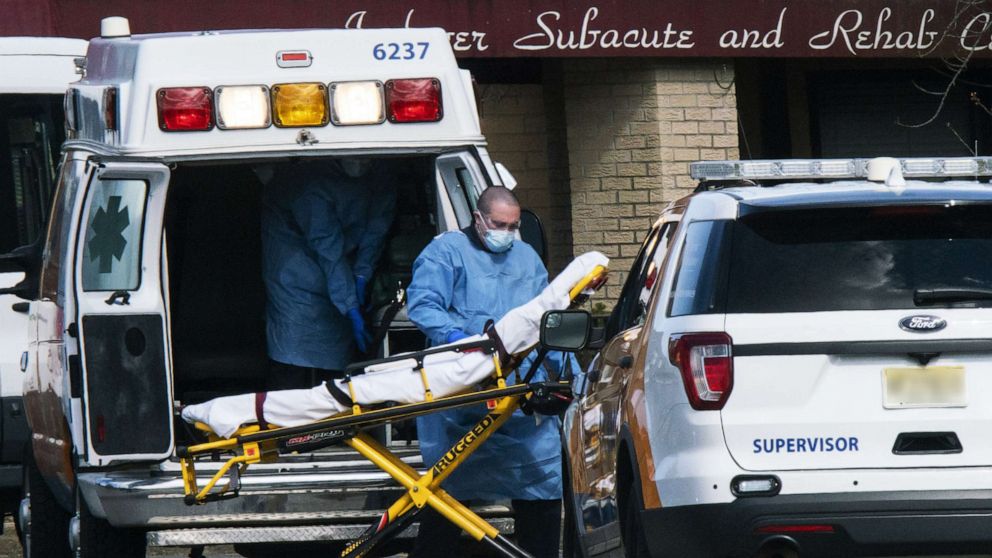 The grisly discovery of 17 bodies stored inside a New Jersey nursing home amid the novel coronavirus pandemic has prompted the attorney general to investigate the facility and left families scrambling to understand what went wrong.

Police said they found the bodies after a request came through for 25 body bags to be delivered to the Andover Subacute and Rehabilitation Center in Andover, New Jersey.

Officials initially discovered five bodies in the facility's holding area, but then were tipped off that another body was stored in a shed, according to police.

Though no body was found in the shed, more were found inside the holding area after police searched the area again.

The 17 bodies were among 68 deaths linked to the facility from January 1 to April 15, including two nurses, according to the Sussex County Department of Health. Thirty-three of those deaths were confirmed to be due to COVID-19, according to the department.

At least 100 residents have been reported to be COVID-19 positive, while 40 staff members have tested positive, officials said.

Gottheimer said two of the biggest challenges are providing enough personal protective equipment and making sure there is enough staffing.

"There is such a massive shortage there, these are people who need help; and not just from the virus, but day to day," Gottheimer said. "Breaks your heart when you hear these stories."

New Jersey Gov. Phil Murphy said he was "heartbroken" over the situation. "I'm also outraged that bodies of the dead were allowed to pile up in a makeshift morgue in the facility. New Jersians deserve to be cared for with respect, compassion and dignity. We can and must do better," Murphy said in a press conference.

New Jersey Attorney General Gurbir S. Grewal confirmed in a statement that his office was investigating the facility. He said he could not provide updates until the investigation was completed.

The Andover Subacute and Rehabilitation Center is the largest nursing home in the state with more than 500 beds and two buildings.

Judy Persichilli, the state's Department of Health commissioner, said that at one of the buildings 84 residents were diagnosed with COVID-19. Since March 30, there had been 28 deaths at that building, 14 of which were due to the virus, according to Persichilli.

At the other building, 19 residents have been reported as COVID-19 positive and subsequently hospitalized, according to Persichilli.

The owner of the nursing home denied that 17 bodies had been found.

"To clarify previous news reports, there was a total of 15 bodies in our holding room on April 13th. Eight of them actually expired on April 13th and a total of 13 bodies were removed before midnight and occurred with the assistance of Andover police department," Mutty Scheinbaum, the owner, said in a statement to ABC News.

"The owners, administrators and our heroic healthcare staff of nurses and nurse aides have been working relentlessly to contain the virus and safeguard our residents and staff. The health and safety of our residents and staff is our utmost priority and responsibility," he said. "Ownership and administration is working around the clock to ensure we are able to resolve the pandemic."

Nursing homes have been particularly devastated under the pandemic, with some seeing daily increases in deaths. Some families have said they have not been told what's happened inside or to their loved ones.

Beth Gangi, who said her 78-year-old uncle Lawerence Togno died at the facility, said the Andover nursing home failed to give Togno adequate care or keep her father, Togno's brother, in the loop about his condition.

Gangi told ABC News that on April 2 the facility called her father at 2:30 a.m. in Florida, where he lives, saying that his brother had been taken to a local hospital with a fever. By 6:30 a.m. that same day, according to Gangi, the facility called her father back to say that everything was fine and the hospital had sent him back to the nursing home.

From the time Gangi says the nursing home told her Togno had been brought back from the hospital to now, she said the family has not been given answers on what went wrong. She said she spoke on the phone with a nurse and was told that there were "no notes" from April 2 to April 6 for her father to indicate what had gone wrong.

She said she was also told Togno was found unresponsive at 7:30 a.m. by a social worker and that rigor mortis had set in. Gangi said she informed the nurse that rigor mortis generally sets in about three to four hours after death and peaks around 12 hours.

"So basically, you're telling me that there are no notes for four days about my uncle and you have no verification or notes that anyone checked on him before they found him, as you put it, unresponsive when he actually was dead in his room at 7:30," Gangi said she told the nurse.

Gangi said her father had received a letter from the facility to inform him that several residents had tested positive, but the letter did not indicate whether Togno had been tested or if he was diagnosed with COVID-19.

Gangi said she and her father learned that Togno had tested positive for COVID-19 after his death.

She said there should be both an investigation into the facility and a class action lawsuit against them.

"I just I feel like nobody should have to die alone, you know" Gangi said. "And I feel like my uncle definitely died alone."