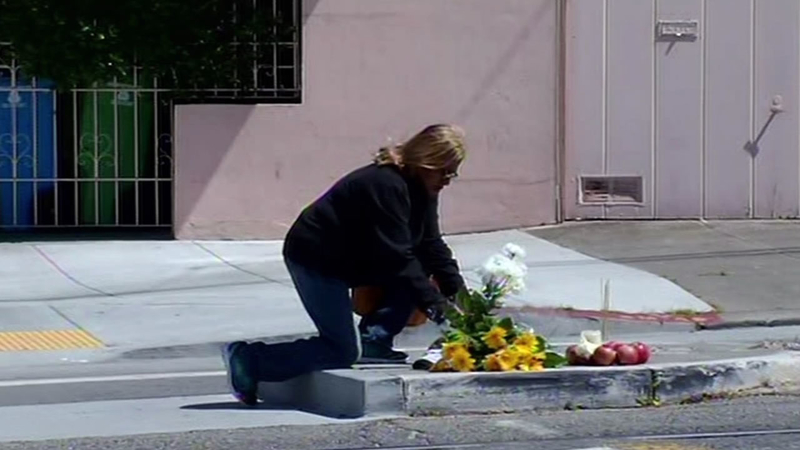 SAN FRANCISCO (KGO) -- A San Francisco family is in mourning after a middle school student, who was on his way to class, was hit and killed by a Muni light rail train in the city's Ingleside neighborhood.

A growing memorial at Lakeview and San Jose avenues represents what Muni says is its first fatality of the year. But ABC7 News spoke with neighbors who say there have been lots of close calls at this busy intersection.

He lost his life running to catch the Muni LRV to school. 12 yr .old Andrew Wu was pinned underneath in the Ingleside pic.twitter.com/ife0O1viM1

The boy was rushing to catch the Muni train to school and it ended up costing him his life. Police say the victim, 12-year-old Andrew Wu, was running in the crosswalk across San Jose Avenue just before 8:30 a.m. A car and an SUV braked suddenly to avoid him.

"What's not clear is how, but the boy made a pivot move off of that secondary vehicle," said Officer Albie Esparza. "As a result, he landed in the street on northbound San Jose Avenue where the LRV was travelling."

Wu, who lived nearby, was pinned beneath the train he was trying to take to Aptos Middle School. Workers at a store across the street heard his mother's screams and one saw her desperate effort to save him.

The distraught father was also there.

Young boy running to catch a Muni train is struck and killed by it at San Jose and Lakeview. pic.twitter.com/bZpsCqLSX7

Witnesses say seeing the parents' raw grief was heartbreaking. Hayter described both parents as "being hysterical" after witnessing the accident.

According to Esparza, the boy was pronounced dead at the scene.

Now as a memorial to Wu grows, his classmates are remembering him.

"He was funny, he's like the kind of person you wanted to be friend with," said one classmate.

Esparza added, "It's traumatic. It's impacted the whole neighborhood, his friends. It's really a tragedy when a life is cut short."

Residents say this intersection has always made them nervous, and that many people have been asking for a stop light or stop sign here.

"I always see this train coming this way, press the brakes really hard, and skid halfway down the block," said Matt Jones, who lives nearby. "I think there should be stop sign for vehicles and the train. It's dangerous."

Muni says it has plans to install a flashing yellow beacon next year.

On Tuesday, San Francisco Unified School District Richard A. Carranza issued a statement that reads: "I extend my deepest condolences to the family, friends, teachers and other community members affected by this terrible loss. I know we all share in our city's collective grief today."