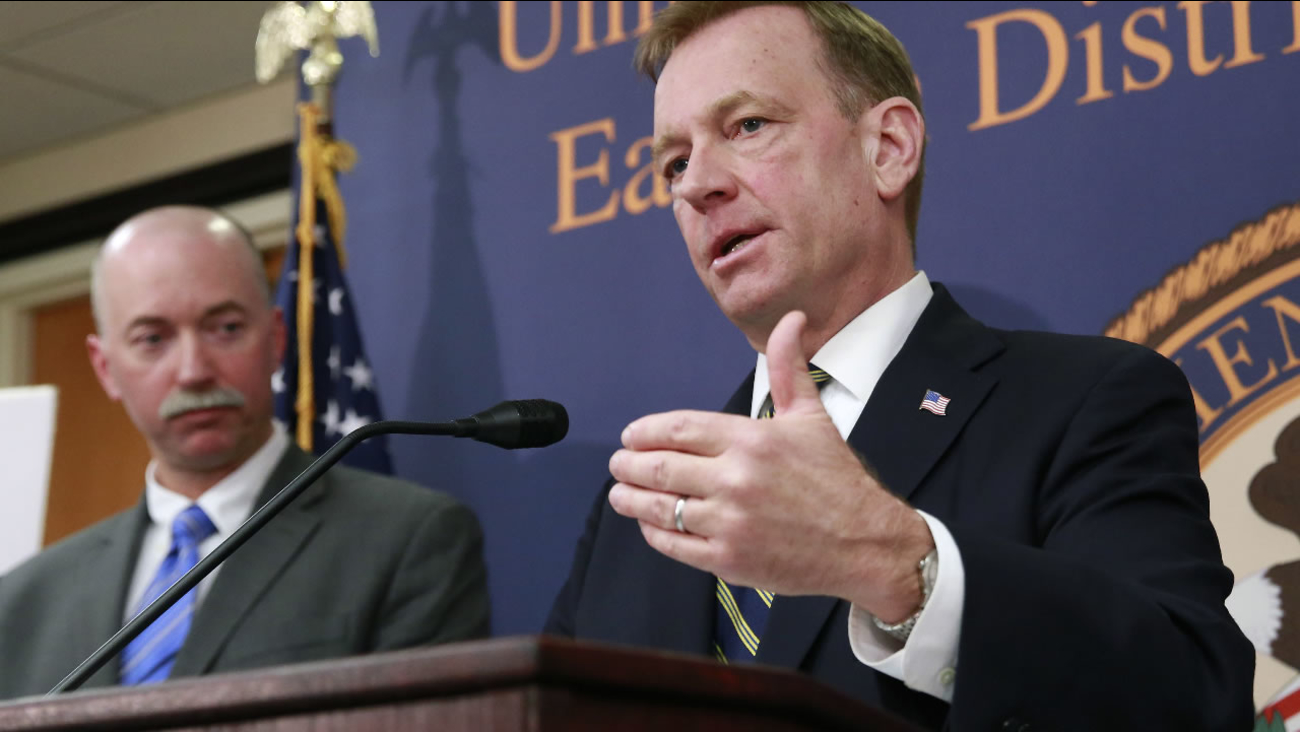 The raids culminated a months-long investigation focusing on dozens of Chinese nationals who bought homes in seven counties. Most of the buyers were in the country legally and were not arrested as authorities investigate if they were indebted to the gang and forced into the work, U.S. Attorney McGregor Scott said.

Much of the pot was shipped to Georgia, Illinois, New York, Ohio and Pennsylvania through Atlanta, Chicago and New York City, he said. The drug is legal in California but requires permits to grow and can't be sent across state lines. It is still banned by the U.S. government.

Black-market pot-growing houses have proliferated in the inland California region where authorities carried out the raids, and many of them were traced to Chinese criminal organizations from the San Francisco Bay Area in the mid-2000s, Scott said. The high number of grow houses in the area may be because of low property prices compared with the Bay Area and the state's large Chinese population, the prosecutor said.

Scott called the recent crackdown "a game-changer" that may have cost the criminal organization "hundreds of millions of dollars" in lost drug profits and the money it spent on the homes.

"It hits the criminals right where it counts - in the pocketbook," he said.

Authorities tracked at least 125 wire transfers totaling $6.3 million from Fujian Province in China, all just below the $50,000 limit imposed by the Chinese government.

Officials are trying to learn if the homebuyers are what Scott called "indentured servants" - indebted to the Chinese gang and brought to the United States to buy and tend the grow houses. Many speak only Mandarin Chinese.

"We're treating them as victims" who may have been "forced or coerced" to work in what can be toxic environments, FBI Special Agent in Charge Sean Ragan said.

The buyers generally used the same Sacramento real estate agents, borrowed from private lenders instead of traditional banks, and used straw buyers who purchased the properties on behalf of the real owners.

The U.S. crackdown comes as California is months into creating the world's largest legal marijuana market amid uncertainty about whether the U.S. government will try to shut it down.

VIDEO: Plan for California pot town going up in smoke?

More than 500 officers, including SWAT teams, fanned out over two days to search and seize 81 houses and two real estate businesses. Another 25 houses were raided previously.

The U.S. Department of Justice said it was one of the largest residential forfeiture operations ever. Prosecutors will now ask judges to transfer ownership of the houses to the U.S. government to resell while they track the enterprise back to its roots, Scott said.

Most of the suburban houses were valued at $300,000 to $700,000, though some were in rural areas and some in more upscale neighborhoods.

U.S. Attorney General Jeff Sessions said in a statement that transnational criminal organizations are "a blight on our communities, bringing dangerous drugs to our streets and trying to impose a false sovereignty over our neighborhoods."

The Chinese consulate general's office in San Francisco did not respond to multiple requests for comment.

Authorities previously said the practice of growing marijuana in homes instead of outdoors originated along Canada's West Coast and migrated south as border restrictions increased after the Sept. 11, 2001, terror attacks.

Suburban tract homes get transformed with high intensity lights and irrigation pipes, gutted to add ventilation pipes and air filtration systems to vent the tell-tale smell, and stacked with tables full of marijuana plants that could produce multiple crops each year.