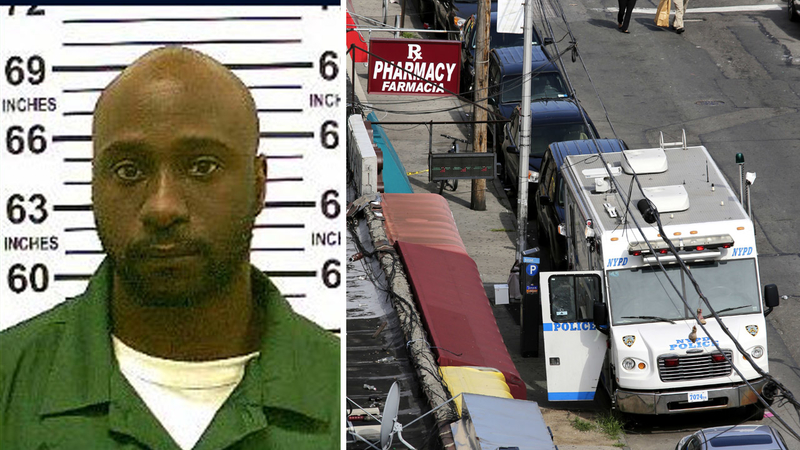 NEW YORK -- Authorities have identified the suspect in the fatal shooting of an NYPD officer as 34-year-old Alexander Bonds.

Bonds was on parole for a robbery in Syracuse in May 2013.
He also had a number of other prior arrests, including an assault on a police officer with brass knuckles in Queens in 2001, authorities said.

Police say Bonds opened fire in the Bronx early Wednesday, killing NYPD Officer Miosotis Familia as she sat in a mobile command post.
Officers confronted Bonds about a block away from the scene.

He pulled a revolver and police fired, striking and killing him, according to the NYPD.

Investigators say Bonds has previously lived at a homeless shelter on East 53rd Street, but he currently lives in the Bronx with his girlfriend, who detectives are interviewing.

They are also going through some social media believed to be connected to Bonds that is critical of law enforcement.

Bonds has up to six different aliases, and goes by both Alexander and John.

In a video posted on Facebook in September, the Bronx man ranted about the treatment of civilians by officers and talked about how hard life was behind bars.

"Don't think every brother, cousin, uncle you got that get killed in jail is because of a Blood or Crip or Latin King killing them. Nah, police be killing them and saying that an inmate killed them," he said in the video.

Aside from the police rant, Bonds' Facebook page mostly consisted of inspirational quotes and quizzes.

He was sent to state prison in 2006, released in 2013 on conditional parole, and was required to make routine visits to a parole officer in the Bronx.