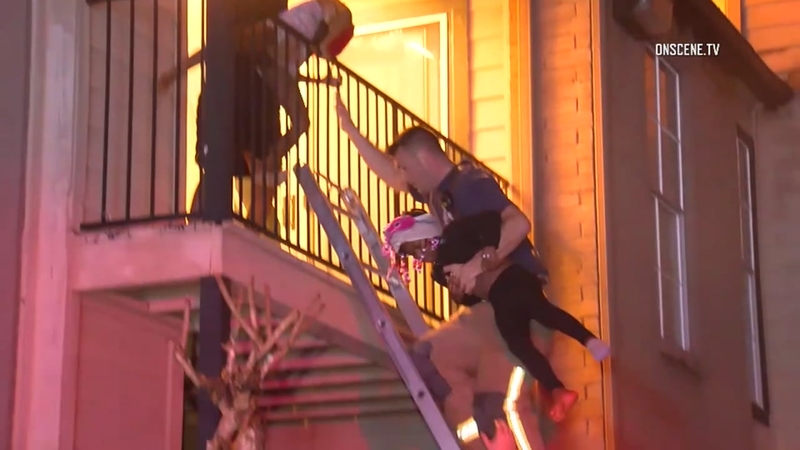 HOUSTON -- A young mother's heroic actions helped save her children during an early morning apartment fire.

It happened just after 2 a.m. Monday off Cornerstone Village Drive near FM 1960 in northwest Harris County.

That mother says they escaped the burning apartment with just seconds to spare.

She was shocked to see the video of the rescue and her heroic actions.

The mother says just a few weeks ago she taught her kids what to do if there is a fire, never knowing that those lifesaving skills would be needed.

As the flames roared overhead, she calmly lifted her children one by one over the balcony rail to waiting firefighters.

She says the fire was blocking her from getting to the front door.

It was the woman's 8-year-old daughter who woke up first. She asked her mom, "why is there red light in the room?"

The young mother saw the flames and realized she only had one route to escape, the balcony.

"She was in the flames, totally," says security guard J.R. Crombi.

Crombi says once he saw the flames he tried to get residents to safety.

RELATED: QCalFire getting ahead of fire season with prescribed burns

He says he is surprised by how fast the flames moved, and thankful everyone got out.

"I was honking my horn. I was flashing my lights, trying to make sure they got out safe. But I was surprised to see that lady coming down that ladder with those kids," said Crombi.

Residents say they had little time to react.

"I just grabbed my kids and went," said Margaret Williams.

Williams said she could only get her children and husband out before the smoke and flames consumed her apartment.

"My daughter was crying because she trying to get her stuff and I just told her we got to let it go," said Williams.

Firefighters were also able to rescue a dog from one of the burning apartments. The dog was reunited with its owner and is doing okay.