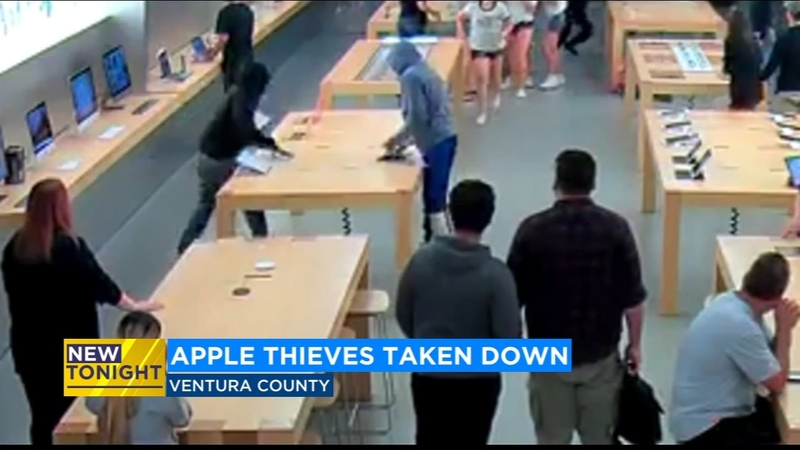 FRESNO, Calif. -- Following a string of Apple store robberies throughout the state, shoppers in Southern California finally said enough is enough and tackled two men caught in the act near the Apple store in Thousand Oaks over the weekend.

"These items are small and expensive so if they get away with a few things in their hands they're very easy to transfer into cash," said Ventura County Sheriff's Office Cpt. Garo Kuredjian.

Three men, all wearing hooded sweatshirts were caught on surveillance as they entered the store and proceeded to snatch iPhones and laptops - then seconds later they were gone.

An all too familiar scene for law enforcement, just last month in Fresno -- four men made off with more than $30,000 worth of merchandise from the Fashion Fair Apple store.

In Costa Mesa a couple weeks later the same thing.

And just two hours before the Thousand Oaks store was hit, more Apple products were stolen from another Apple store in Los Angeles.

Investigators are now trying to link the suspects to the same crew hitting Apple stores across the state.

"They're actually targeting these apple stores because of what they have and there's network in place to sell these on the secondary market," said Cpt. Kuredjian.

Minutes after the Thousand Oaks robbery officers tracked down the third suspect leaving the mall.

Three men were arrested, along with two women believed to be in the getaway car.

"None of these suspects are from our area but obviously it's a profitable venture where they're traveling up and down the state doing this. If they went all the way to Los Angeles or Ventura County they may well be responsible for things in the Central Valley or Northern California as well," said Cpt. Kuredjian.
Report a correction or typo
Related topics:
southern californialos angelestheftburglaryarrestrobberysouthern californiaapplegood samaritan
Copyright © 2021 KFSN-TV. All Rights Reserved.
RELATED
Apple Store robbery caught on video in SoCal
Thieves steal from Fresno Apple Store in seconds
VIDEO: Thieves strike Rancho Cucamonga Apple store in broad daylight
THEFT
SF offering up to $100K for info leading to theft ring busts
Popular Aussie singer held at gunpoint, robbed of $30K gear in SF
EXCLUSIVE: SF Walgreens employee scared to work after attack
5 more SF Walgreens stores are closing amid rampant retail theft
TOP STORIES
Bay Area storms to grow in strength soaking the region
CA wildfire that threatened Lake Tahoe fully contained
LIVE: Track rain in Bay Area with Live Doppler 7
'Firestorm' tells Oakland Hills fire survivors' stories 30 years later
NOAA forecast predicts drought will continue or worsen in parts of CA
North Bay on alert for possible atmospheric river this weekend
Hayward Unified could close 9 schools in next 3 years
Show More
Former NYPD chief says latest find amid Laundrie search is 'strange'
Sheriff to release cause of death for family found on hiking trail
Gas hits $7.59 a gallon in CA town
'Tree of Hope' shines on anniversary of historic Oakland fire
Warriors to take on Clippers in home opener at Chase Center
More TOP STORIES News