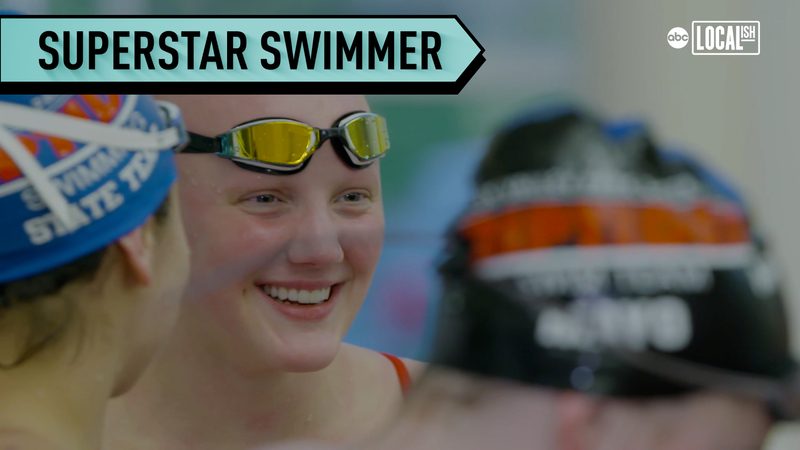 Record-breaking teen swimmer blazes an inspiring trail in the pool

AURORA, Ill. -- The pool has always been the place where star teen swimmer Leah Hayes could really be herself!

The 15-year-old from Aurora, Illinois was diagnosed with alopecia when she was just 6 years old. The diagnosis is an autoimmune disorder that causes hair loss.

As Hayes adjusted to life without hair, she concealed her condition at school with wigs and hats, but she never hid her alopecia around her supportive Auroras Fox Valley Riptides swim team family.

"Here, she could always just be herself. She was just always Leah to me, I didn't even know there ever was a wig," Hooper said.

In fact, Hooper thinks Hayes' strength and perseverance in coping with alopecia made her an even stronger and more driven athlete. That internal "drive Leah has along with sheer talent, hard work and solid coaching has put this teen in an elite class of US swimmers," Hooper added.
When Hooper saw Hayes win for the first time seven years ago, Hooper knew she had remarkable abilities. H

"We put her in the water and it took less than a minute to see there was definitely something way different than your average child saying, 'I wanna be on your swim team.'" Hooper said.

Within two years of swimming for Hooper, Hayes did indeed begin making a name for herself as a contender in USA Swimming.

"My first national age group record was 200 freestyle when I was 10 years old," Hayes said.

However, Hayes would go on to set many more records, in fact, her father, Tim Hayes, said the teen has set six national age-group records in one swim meet at the Indiana University Natatorium in Indianapolis.

"It is so hard to set a national age-group record. What that means is that no one in the history of the sport has ever swum that event faster," Hooper explained.
Hayes' accomplishments soon captured the attention of the national media. Sports Illustrated Kids nominated Hayes as their "SportsKid of the Year" in 2018. She eventually won that honor and appeared on the cover of the magazine.

Her Riptides teammates surprised her with that news and a poster-sized version of the actual magazine cover at practice one day at Auroras Vaughn Athletic Center.

The Riptides teammates were again at Hayes' side when they recently surprised her with a send-off for the June 2021 Olympic swim trials in Omaha, Nebraska. Hayes had impressive showings, competing in the 400 I.M., 200 I.M. and 100 Freestyle but fell short of making Team USA for the Tokyo games.

Hooper said it served as a valuable training experience for Hayes.

"We already talk about the next Olympic trials. We want to take on the next trials in a much stronger way," Hooper said.

For now, Hayes will keep up a tough workout regimen with the Riptides. As for her Olympic aspirations, the high school sophomore said, 'it's been my dream ever since I started swimming.