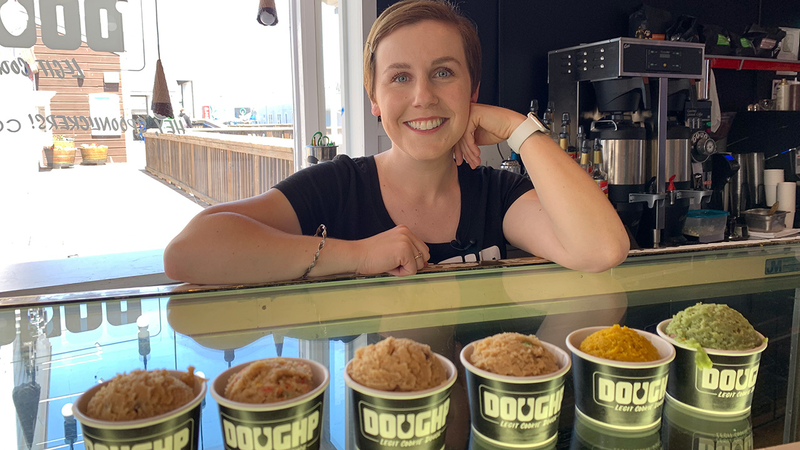 SAN FRANCISCO, Calif. (KGO) -- A local entrepreneur with an inspirational story is hoping to cut a sweet deal with the Sharks on ABC's hit show Shark Tank on Sunday May 5th.

Nestled in a tiny shop, packed with customers at busy Pier 39 sits Kelsey Witherow's labor of love: Doughp, a safe-to-eat raw cookie dough business. Pretty soon, millions of people across the country will soon learn about her product...and her story when her episode airs on ABC7.

"I love dessert, so for the latter part of my life, I thought, how could I make eating dessert my life?" laughs Witherow.

But there's so much more to Doughp than just Instagrammable delectable looking dessert. There's a story behind each and every scoop, stemming from a time that wasn't so sweet.

"I had an on-and-off relationship with alcohol and it was holding me back from doing something more with my life," she said.

Witherow started drinking when she was 15 years old. Despite going on to having a successful career in tech it wasn't until a business trip to Barcelona where she hit rock-bottom and realized something had to change.

"With all the pressure I put on myself through those years, it was inevitable something else was going to break."

That's when Witherow made the decision to get sober. During this time, instead of hitting the bar? She made cookies with her family.

"I was just alive in the kitchen. The precision and focus is exactly what I needed and it was really cathartic for me to create something and be giving it to someone."

Using her love of cookie dough as a platform to encourage her customers to have a conversation.

"I launched the #Doughp4Hope initiative with the company to raise more awareness about mental health and addiction. I think we live in a world where we feel like have to be alright all the time it's okay to not be okay," Witherow said. "In our storefronts, I wanted to create a place where people feel safe to engage and have this opportunity to have raw interaction...and a conversation. We also have mental health certification for all our staff."

But perhaps it's the stories, like these that come in from customers at Doughp's San Francisco and Las Vegas stores that touch Witherow's heart the most.

"I just got this message this morning: There are days I feel like giving up on this journey and returning to drinking. I was in my home office and have the TV on and heard your story and I paused and had to rewind. Congrats. You are awesome."

Now sober almost four years, Witherow's future is bright. Whether or not she gets a deal on the Shark Tank or not, she has already got a pretty good deal...and remind others, they can too.

"You can do it. You can turn your life around and be whatever the heck you want to be," Witherow said.