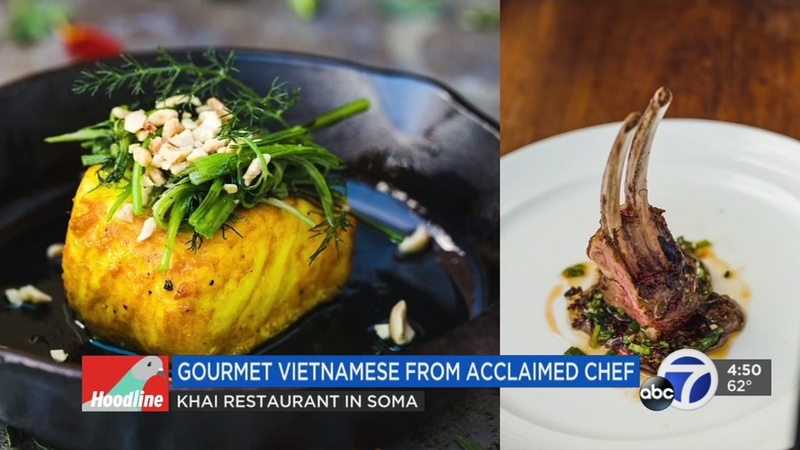 SAN FRANCISCO (KGO) -- We've partnered with the team at Hoodline - the hyperlocal neighborhood website to find weekend activities in and around the Bay Area.

These dishes are the creations of master chef Khai Duong. His new spot in SoMa offers an intricate 10-course tasting menu. He says after 35 years in the business, he still lives for your reaction when you taste his food.

"When they have their first bite and they say, 'Wow!' That makes me have goosebumps," said Duong.

Inspired! Born in #Vietnam, one of 12, @chefkhai says he never could have imagined becoming a world-renowned chef at #Khai in #SF. #abc7now pic.twitter.com/r8vgz0KbPO

He says as a child, he never could have conceived of this life. Born in Vietnam, one of twelve children, he fled the country in 1975. In college, he studied electrical and then mechanical engineering before finally following his heart into the kitchen.

"My mom wanted her children, especially a boy, to grow up to be a lawyer, a doctor or an engineer, not a cook," Duong explained. "Even when I came back home after 20 years, I was already a well-known chef. My mom asked me, 'What did you do in America?' I had to lie to her, I had to tell her I was an engineer."

He says now his entire family knows what he does and is proud of his success.

San Francisco foodies know Duong for Ana Mandara, where he was owner and executive chef. When the restaurant closed in 2012, he says he went back to Vietnam for four years, to reacquaint himself with the scents and flavors, and regain his passion for his craft.

TELL ME: Which would you choose? Seared lamb, crab sausage or coconut durian dessert? Not a bad assignment, learning from @chefkhai #abc7now pic.twitter.com/uNawMgKkFa

Khai has been open for two months now. The restaurant has an emphasis on healthy, organic, sustainable and local ingredients.

"This food is very unique, you won't find it anywhere else in the world. I bring the spices from Vietnam, use my technique of French cooking and then the influence of California cooking and I combine it," said Khai.

It shows. He hand-picks shiitake mushrooms from Oregon to blend into a umami-rich vegetarian Paté, drizzled with salted honey. Duong says one dish that keeps patrons come back is his fresh coconut roll dessert, filled with durian fruit and sprinkled with candied ginger and mint.

Khai restaurant is open Tuesday through Saturdays on 655 Townsend Street. There are two seatings for dinner, at 5:30 p.m. and 8:30 p.m.

Chef Khai Duong is also being honored with the Asian Chefs Association at CAAMFeast this Saturday, March 4th. CAAMFeast celebrates food and raises funds for the Center for Asian American Media. You can get tickets to meet Duong and other big-name chefs, as well as taste incredible Asian cuisine. CAAMFeast is on Saturday, March 4th at 6:00pm at the War Memorial Opera House.

Comedy Oakland Presents
Rising comedians take the stand-up stage along with industry veterans at Comedy Oakland. It is putting on two performances this Friday, March 3rd.

Comedy Oakland was founded in May of 2009 by Samson Koletkar. He describes himself as an "Indian-Jewish standup comedian" and says his background is a constant source of inspiration.

"I'm a first-generation immigrant comedian in America," said Koletkar. "I talk a lot about my younger kid. He's adopted and American, which is an interesting inversion of things."

You can see him perform on Friday. The performances are located in a loft above the Spice Monkey Bar and Restaurant. Koletkar says you can expect food, drinks and a great time. They even have vegetarian, vegan and gluten-free options.

Youth Orchestra Performs at the San Francisco Symphony
It's time for the Bay Area's greatest young classical musicians to shine. The San Francisco Symphony Youth Orchestra's participants are selected from more than 300 applicants from the greater Bay Area. The program was founded in 1981, and is designed to give young talent tuition-free coaching and incredible on-stage experience.

You can watch them perform Sunday, Mar. 5, when conductor Christian Reif will lead them in Mozart, Barber and Dvorak.