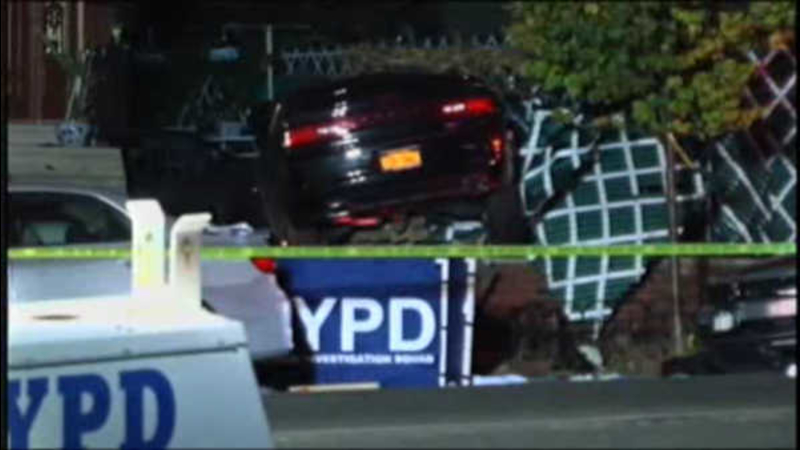 MORRIS PARK -- Investigators are looking into whether a medical condition may have caused a motorist to smash into a group of trick-or-treaters in the Bronx Saturday, killing three people including a 10-year-old girl.

Police are examining whether a medical problem such as a seizure may have been involved.

Four others are injured, including two children, ages 3 and 9 years old.

The three people who were killed were identified as 10-year-old Nyanna Aquil, 65-year-old Louis Perez, and 24-year-old Kristian Leka.

It was 5 p.m. on Halloween night, and Morris Park Avenue in the Bronx was crowded with costumed kids going door-to-door for candy, when according to police, a car jumped the curb.

Eyewitness News is told at least half a dozen trick-or-treaters and their families never had a chance to get out of the way. Authorities believe the driver hit another car before it lost control and jumped the curb.

Police say he struck the pedestrians and then went through a fence in front of a home.

Officials confirm that some of the victims were trapped under the car, and others went flying. Neighbors thought the severed body parts were just gruesome Halloween props, until they realized that the nightmare was real.

Gloria del Giudice says the scene was horrible, and that grown men were crying.

3 other victims, ages 3, 9 and 21 were rushed to the hospital, including the driver who was identified as a 52-year-old Bronx resident. He remained in the hospital with minor neck and back injuries.

As investigators try to figure out how and why he lost control, neighbors are still left with the haunting images of the victims.