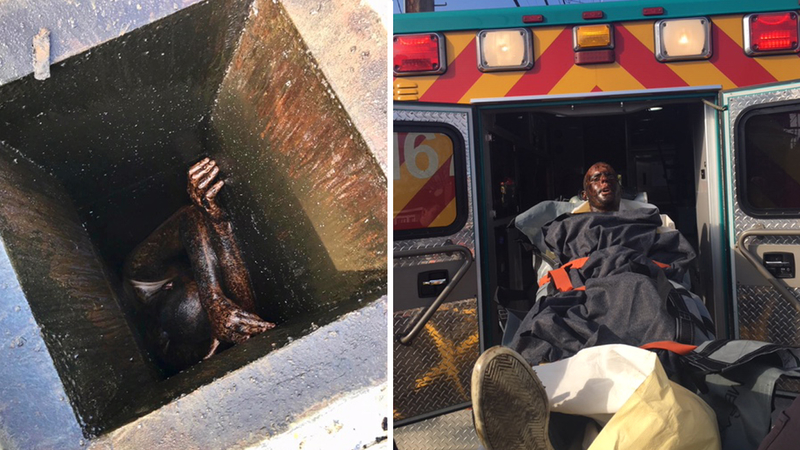 SAN LORENZO, Calif. (KGO) -- A would-be burglar is lucky to be alive after getting stuck in a restaurant grease vent for two days. The suspect was finally discovered by the owner of a neighboring business, who heard his muffled cries for help.

"I keep hearing this ah, ah and I'm like, 'who can it be?'" said Igor Campos, who owns Campos Tax Services on Bockman Road in San Lorenzo.

Campos finally went to investigate the moaning on Wednesday morning at the Chinese restaurant next door, a business that has been closed for months.

#DEVELOPING “Had he not been found today, we could be having a whole different conversation.” First responder says it was no joke for the man stuck in a restaurant grease vent. One more day, and he might not have made it. Instead he was rescued...with cuts and bruises. #ABC7now pic.twitter.com/bMNfdAcitc

There, Campos discovered a man covered in grease stuck in an exhaust vent.

Campos called 911 and when first responders arrived, all they could see from below was the man's leg and foot.

A would-be burglar is lucky to be alive after he was trapped in a grease vent at a San Lorenzo Chinese restaurant for two days.

"When our crews got here, they found him stuck above the stove area here," explained Alameda County Fire Department Battalion Chief John Whiting.

In order to free the man, Alameda County firefighters had to dismantle the vent.
"Our crews had to remove a lot of this sheet metal in order to gain access to him in order to bring him down into the kitchen," said Whiting.

Once the suspect was freed, he was loaded into an ambulance and taken to a local hospital.

930am, ACSO and @AlamedaCoFire responded to a vacant Chinese food restaurant on the 700 block of Bockman Rd. San Lorenzo. We located a trespasser(possible burglar) trapped in the grease vent on the roof. He had been there for about 2 days. Fire rescued him and he is in custody. pic.twitter.com/OfVN5e8oeV

"First off we can confirm this man was not Santa Claus and did not have legal authority to be here," said Alameda County Sheriff's spokesman Sgt. Ray Kelly, who said he's not sure yet what charges the 29-year-old suspect will face.

"We know sometimes suspects try to break into businesses to steal copper wire and plumbing and recycling for money," explained Kelly. "This appears to be something along those lines."