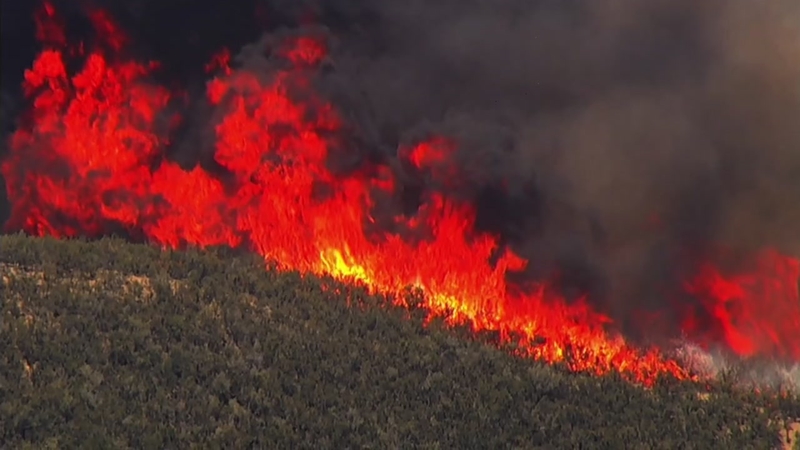 The Lake County Sheriff says there is "significant fire activity" threatening the area, so get out now.

The governor has declared a state of emergency in Lake County. Twenty-two buildings have been destroyed, including some homes.

Hundreds of others have been threatened.

Mandatory evacuation orders are also in effect for the entire Spring Valley subdivision of Clearlake Oaks.

Not everyone is obeying those evacuation orders. When the fires picked up, more residents packed up and left on Monday. But there are plenty of die-hards watching this unpredictable blaze.

"One minute, it's fine. The next, oh Lord help us," said Sandra Clark, the woman behind the register in Spring Valley's Pantry of Clearlake Oaks.

In the past couple of days, she has seen too much fire and worried even more. Last weekend, the Pawnee Fire burned within 50 yards of her store.

On Monday, a watch party was out front as locals waited to see which way the wind would drive it.

The Pawnee Fire has destroyed dozens of buildings and is threatening hundreds of others near the community of Clearlake Oaks in Lake County.

"I hate to say we're almost used to it," said RIchard Borgo. This is the fourth straight year fire has raged through Lake County, destroying homes, structures and scorching tens of thousands of acres.

Cal Fire estimated this blaze at 8,200 acres Monday morning and counting. They are not encouraged by the start of the fire season.

"The numbers and stats are lining up to last year, and what we have seen is similar to last year," said Cal Fire Captain Amy Head. 2017 ranks as California's worst, most destructive, ever.

As more residents evacuated on Monday, others insisted on staying put, even with flames close enough to see and hear.

When asked why they wait so long, resident Jeff Haddox replied, "Because people will loot or steal."

As if to accent that concern, Lakeport police made an arrest. They describe a suspected looter with a loaded semi-automatic and a hood's worth of marijuana. He had been driving through an evacuated neighborhood. "It's sad. Firefighters try to get by and people like this are doing this kind of stuff," said Lakeport Police Dept.'s Mauricio Barreto.

In the midst of all this fire, Lakeport Police have arrested a suspect they suspect of looting burned and evacuated homes. Marijuana, weapon, ammunition. No identification. #abc7now pic.twitter.com/tK1exf5tpd

Lakeport Police say the suspect did not speak English.


No injuries or deaths have been reported in the Pawnee Fire.

A Red Cross shelter for evacuees is set up at Lower Lake High School. "What we're stressing is that people, when they get the evacuation order, they heed it immediately and get out and stay out until it is safe to return," state Department of Forestry and Fire Protection Battalion Chief Jonathan Cox said. "This is one of four large fires burning in Northern California. It's a good reminder that fire season is upon us."

New evacuation orders have been issued for the Double Eagle Ranch area. Officials say there is "significant fire activity" threatening the area, so residents have been strongly advised to get out now. A shelter has been established at Lower Lake High School, 9430 Lake Street in Lower Lake. The shelter will accept large and companion animals.

Mandatory evacuations have been ordered for the entire Spring Valley subdivision of Clearlake Oaks, Cal Fire said. The latest evacuation information can be found here.
Around 4 p.m. Sunday, officials expanded the mandatory evacuation area past Highway 20 to the north and east of Old Long Valley Road to Round Ball Road. The areas include Mule Skinner, Long Branch, Watertrough Road, Fintlock, Muzzleloader, No Guns, Antelope, Cougar, Marianne, Ramrod, and Moccasin.
Some residents only escaped with the clothing on their backs. Luckily a family ABC7 News talked to was able to get their cat out of their home as well.

Officials are encouraging anyone in the area to conserve water so that firefighters can use it to fight the fast-growing blaze.

There are multiple road closures in and around the Spring Valley subdivision. More than 20 engines have been dispatched to contain the blaze, as well as two helicopters and several air tankers. The fire is being driven by low relative humidity, strong winds, Cal Fire said.