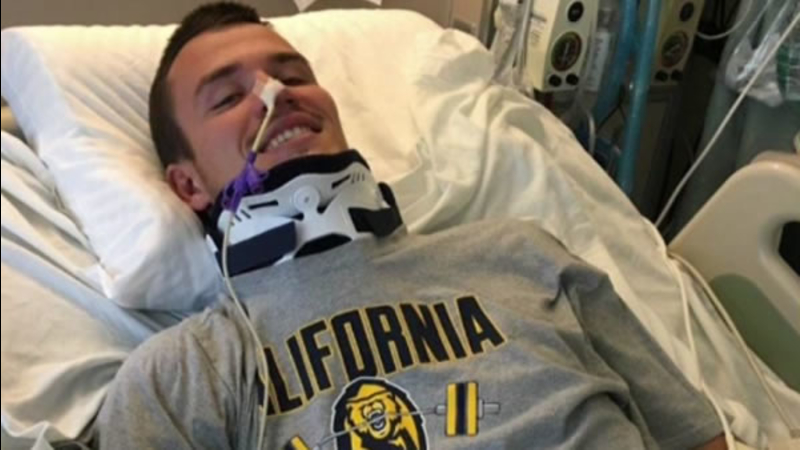 BERKELEY, Calif. (KGO) -- Challenges lie ahead for the Cal rugby player who became partially paralyzed during the team's championship game in Santa Clara. Robert Paylor fell on his head earlier this month.

His doctor and his father gave reporters an update on Paylor's condition and prognosis on Wednesday.

There have been dark moments as his rugby coach at Cal and his father waited for doctors at Valley Medical Center to see what they could do for 20-year-old Paylor. He was paralyzed below the chest after falling on his head at a game in Santa Clara on May 6.

From a photo taken of Paylor on Tuesday, it can be seen that gloom has given way to something better.

"Ever since seeing Robert lying lifeless on the field, we've come from being broken to having hope," his father, Jeff, said.

His trauma and spine doctor says the Cal athlete from El Dorado Hills has some sensation from head to toes, but he is unable to move his hands. Surgery done within hours of the injury has relieved pressure of a cervical disc pressing on the spine but it will take rehabilitation and time to see if his body can mend itself.

The doctor of a Cal rugby player who was partially paralyzed during the national championship game had an update on his condition Wednesday.

"We would expect him to have some degree of recovery naturally over the next year. That could include some recovery of his hand function. Patients with this type of injury face a very difficult problem in that their recovery is extremely individual," Dr. Stephen McKenna said.

Paylor's father says his son is a warrior, determined to do whatever it takes to achieve the best possible outcome. When asked by doctors if he's able to do grueling therapy, Paylor says he's done worse.

"He doesn't ask why this happened or dwell on what life can be if he wasn't in this situation. At the point of injury, he just knew that his life had taken a different path, and he's accepted that future," his father said.

And he's getting moral and financial support from friends and strangers. A GoFund Me page has topped $600,000.

His doctor says it's likely that Paylor can begin rehab later this week.

Click here to donate to the GoFund Me page set up to cover Paylor's medical expenses.

He's a warrior says father Jeff Paylor about son Robert. Son has lost some sensations that may come back in time. Has had 1 surgery to spine pic.twitter.com/yHMNMkiptB

Father Jeff Paylor says his rugby playing son Robert is a fighter & a man of faith. Rehab to start later this week. pic.twitter.com/ogpMtqoZiZ

New photo of #Cal rugby player Robert Paylor taken yesterday at Valley Med where he's undergoing rehab. He's not up to talking to media yet. pic.twitter.com/vq5eTsHEOb