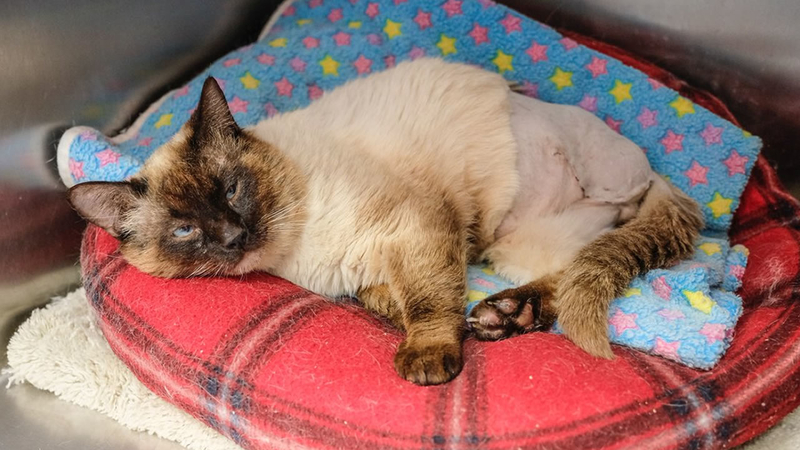 OAKLAND, Calif. (KGO) -- The search is on for the person or people who have been shooting cats with a pellet gun in the East Bay.

Friends of Oakland Animal Services if offering a $10,000 reward for information leading to an arrest.

They say at least four cats have been injured. All the attacks happened in or around the city's Lower Dimond neighborhood.

It's a limbo zone for pets -- a place with pictures of happy cats on the walls, but often, a sad stories inside them.

"That's Percy," said Rebecca Katz, who runs Oakland Animal Services. She would not have invited us back here if she didn't have a problem. And one look at Percy, a now three-legged cat following an amputation, confirms it.

"I mean, we deal with cruelty more than we like," said Katz.

But Percy's case, and not far away, a similar circumstance for another cat named Morgan has put Oakland Animal Services on high alert.

Rebecca Katz of Oakland Animal Services is very concerned about the random pellet shootings of stray cats. "These are feeling, sentient beings. It needs to stop." #abc7now #oakland #cats pic.twitter.com/Dz64lSFca1

Both felines are recovering from being shot by pellet guns and there have been others.

Four cats have been shot in the past five weeks. One was so severely injured that it had to be euthanized.

Every victim has been a stray male.

"If it is an adult, there needs to be some kind of accountability. Cruelty to animals is serious crime," said Katz.

If Rebecca Katz talks like a lawyer, it's because she used to be one for the city of San Francisco.

Her love of animals brought her here. That love for animals has helped to generate a $10,000 reward.

A 3-legged cat in Oakland Animal Services. The tragedy and crime is how he got this way---shot on the leg with a pellet gun. This has happened to stray male cats four times in five weeks. Now a $10-thousand dollars reward to find the person/persons responsible. #abc7now #oakland pic.twitter.com/HlOf7p1Ut0

Most of the shootings occurred in Oakland's Lower Dimond Neighborhood.

The cats have turned up on doorsteps and streets.

As for the one they euthanized, "He was dying when he came in. He was suffering. It was the right thing to do."

It was the right thing to do following a horrible thing done.

Friends of Oakland Animal Services (FOAS) is offering a $10,000 reward for information leading to the arrest and conviction of the person/people responsible. Anyone with information regarding these incidents is asked to contact Animal Control at 510-535-4895. pic.twitter.com/HePVvUrn8v