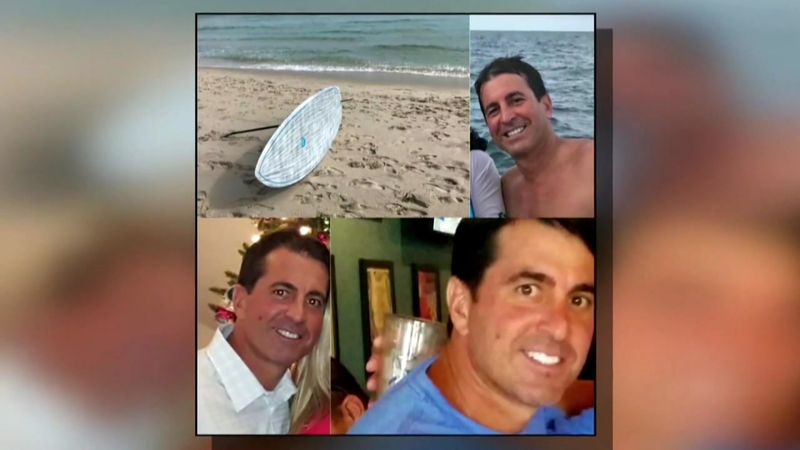 Man mysteriously disappears while out paddleboarding

Authorities in Florida are asking for help in finding a commercial real estate agent who owes more than $500,000 in child support and has mysteriously vanished while paddleboarding on the ocean, according to police and court records.

"It's like the worst dream you could imagine," a concerned family member told ABC News. "I want answers."

Constantine Theoharis, 52, was last seen on March 20 on a blue paddleboard, heading north in the Atlantic Ocean near his Fort Lauderdale home, the Fort Lauderdale Police Department said. He was caught on video on the paddleboard at about 6:30 a.m. that day, according to police.

Theoharis' cousin, Chris Damian, reported him missing three days later, telling police he hadn't heard from Theoharis since March 18 when they spoke on the phone.

According to the incident report, Damian told the authorities that Theoharis had "been depressed lately and they usually talk by phone daily. ... He was depressed over a recent divorce and child support payments but he was not suicidal."

Theoharis, who has been divorced since 2008, owes more than $549,000, according to court records. An affidavit from December said he has not paid any child support after Aug. 6, 2014.

Damian told police he "thinks that the child support issues could have forced him to leave the U.S. because of pending upcoming court action for nonpayment," the incident report said.

But police said Damian had "no proof that he took this type of action."

Damian said it's unusual for his cousin to not contact anyone in the family for that long, the incident report said.

Theoharis' brother, Rick Theoharis, feels like he's in "the worst dream you could imagine," he told ABC News today.

His brother left behind his phone, wallet, keys and passport at his house, Rick Theoharis said, which alerted him that "something was way off."

RELATED: New Jersey twins have different fathers, so only 1 gets child support

Constantine Theoharis was very adept in the water and a frequent paddleboarder, his brother said.
"I hope he didn't have a heart attack or something like that and hit the water and drown. ... He's been pretty stressed out lately," due to the child support issue and taking care of his parents who have dementia, Rick Theoharis said.

Constantine Theoharis' uncle, John Katsikas, is also concerned. He told police that his nephew's blue paddleboard, swim fins, dive mask and a weight belt were missing from his home, according to the report.

Katsikas "feared that his nephew may have committed suicide as he just recently missed court and had a large sum of money judgment against him," the report said.

Anyone with information on Constantine Theoharis' whereabouts is asked to call Det. Juan Cabrera at 954-828-5581.