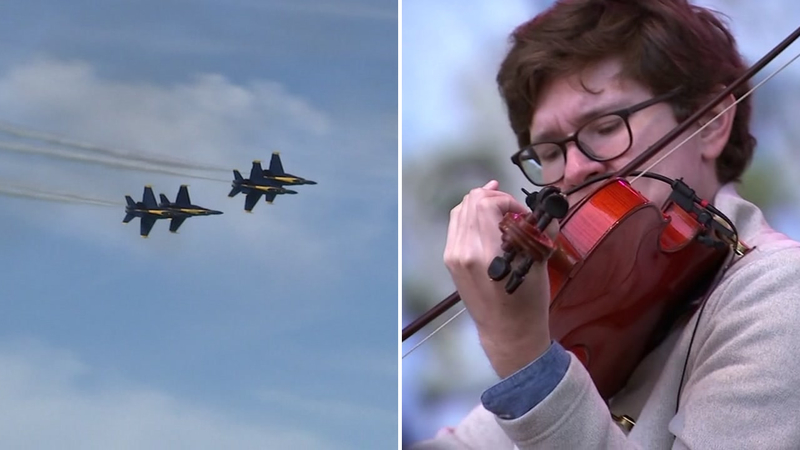 SAN FRANCISCO (KGO) -- More than 1.5 million people will descend on San Francisco this weekend for two major events that have become tradition.

Friday along Marina Green, in San Francisco's Marina District, Gina Ceragioli and her son Charlie Hansen were transfixed by the booming sounds of the Blue Angels.

Charlie has autism and usually doesn't like loud sounds. But during Fleet Week and airshows his mom said Charlie comes alive.

"This is what he's good at and he absolutely is a typical child when he's at airshows, so it's wonderful to see him engaged," Ceragioli said.

Charlie himself has been to 15 Fleet Weeks and travels around the country to different airshows, getting VIP treatment from the pilots and performing teams.

"I like the part when they fly and do their tricks...they treat me very well, like a celebrity!" Hansen beamed.

While some choose to grab a seat in the high-end Flight Deck Club area right along the water, where prices start at $225, others, like Kelly Bleakley of San Diego and her small sons, parked right on the grass to soak it all in.

"The kids just love airplanes! They have their plane shirts and toy with them," Bleakley said.

Tien Bui lives in San Jose and would rather be in a different spot watching the Blue Angels soar, but said the grass is a good second option.
"It would be a little better if we were in our kayaks right on the front row," Bui said.

Meanwhile, across town at Golden Gate Park, the Hardly Strictly Bluegrass Festival, now in its 18th year, is underway. What started at nine bands is now 81, with something for everyone.

"We have a certain focus on roots music, blues, Americana, folk, country, but there's also a lot of rock, soul and R&B and the undefinable," explained Chris Porter, the show's talent booker.

More than 500,000 are expected to attend over the course of three days. Some come from far and wide, others livestream the festival from places as far-flung as Norway and Sweden. This year's musical acts include Jeff Tweedy, Ani DiFranco, Roky Erickson and Ween.

"I have been attending since the very beginning," said Douglas Guray, clad in a cowboy hat and Texas T-shirt. "This festival means everything. It gives you a chance to see friends that you haven't seen in a while and you aren't going to see them until next year."

And while the bands and friends change, what organizers call their free "gift" to San Francisco never changes.