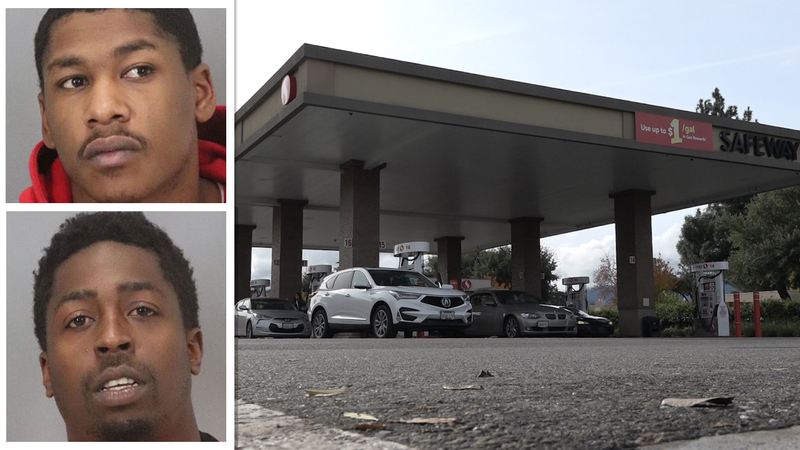 SAN JOSE, Calif. (KGO) -- As dozens of South Bay residents deal with banks after having their credit cards compromised, two arrests have been made in San Jose in another fraud case.

This comes after two men stole credit card information to buy an estimated $1,700 in gasoline.

"I was going to get gas here yesterday and saw this whole place taped off," San Jose resident Chris Mittlestead said. "It's just unfortunate because the holidays are coming and people are looking for ways to get extra money."

In this case, two East Bay men were looking to get extra gas.

Two East Bay men were arrested by @SanJosePD at this Safeway gas station on Cottle Rd. while they were using fraudulent credit card numbers to purchase $1,700 worth of gas. They now face charges. We’ll have more tonight on @abc7newsbayarea. Original story: https://t.co/R7aWNpdHyz pic.twitter.com/GTlieTVaKa

Twenty-six-year-old, Deanthony Adams and 28-year-old Deanndray Miles, both from Pittsburg, were arrested by San Jose police on Wednesday after store employees noticed the men using fraudulent credit card numbers to purchase a large amount of gas at this Safeway Gas Station on Cottle Road.

Officers received a call from a Credit Union reporting the two suspects around 1 p.m.

According to police, the suspects were filling gas up into two trucks and external tanks in their truck beds that totaled out to be $1,700.

These are the 2 men from Pittsburg arrested yesterday afternoon in San Jose. Deanndray Miles (28) and Deanthony Adams (26) were arrested and booked into Santa Clara County Jail for grand theft by credit card, organized retail theft, conspiracy to commit a felony, & identity theft pic.twitter.com/N3WBBtSTAR

So the question is, why all that gas?

"That's a lot of gas," San Jose resident Gabriel Bustos said. "I mean wow! What do you need with all that gas?"

"The only thing I can think of is re-sell it," Mittlestead said. "But I don't know how they're going to do that."

"I suppose that if they have a big tank somewhere that they have access to, they can dump it in a big tank and have gas for a long time for their own use." San Jose resident Don Norling said.

San Jose police say the gas was siphoned back to Safeway following the arrest.

Gas is currently $3.49 at the Safeway station. $1,700 of gas will get you 487 gallons! We’ll have reaction from residents and more on this credit card fraud arrest tonight. pic.twitter.com/lqkt5K4RTc

Safeway also adds that the customers will not be held responsible for the fraud charges.

The arrest comes on the same day that we reported dozens of consumers in the South Bay were victim to hundreds of dollars in fake charges from other Safeway locations across the Bay Area.

Police tell us their Fraud Unit will investigate the case with Adams and Miles and conduct a follow-up to see if there is a connection to other similar incidents in San Jose and throughout the Bay Area.