'Dancing with the Stars' has its Season 25 winner 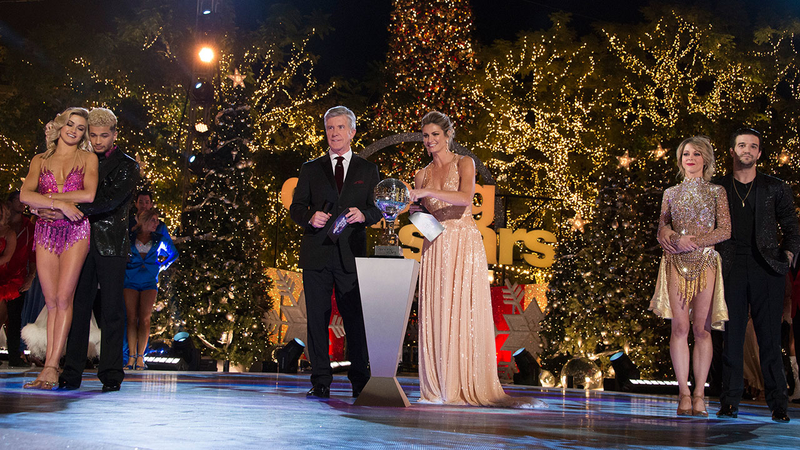 'Dancing with the Stars' winners

LOS ANGELES -- "Dancing with the Stars" head judge Len Goodman knew what we were in for on the second night of the Season 25 finale. On Monday, he predicted this final round would be a "war on the floor."

There were two more rounds of competition on Tuesday night: one, a repeat of a favorite dance from earlier in the season, plus a "24 hour fusion challenge," where the couples had to fuse two dance styles into one routine.

The finale expanded its wings and included a second stage next door to Television City in Los Angeles at The Grove mall. And, in keeping with tradition, they invited back all of the Season 25 competitors.

Season 25 of "Dancing with the Stars" wrapped up with a a "war on the floor" and one of the closest competitions yet.

The "repeat" dance was fun to see but since the judges gave all three couples perfect scores, it really didn't mean anything in the big picture. For the record, Lindsey Stirling did the jive, Frankie Muniz did the Argentine tango and Jordan Fisher did the samba.

Lindsey Stirling: 30 out of 30 for fusion

Mark Ballas blended the tango and the cha-cha into a dance Len called amazing, with no "messing about" but plenty of attack and rhythm. Bruno thought the fusion was seamlessly blended together, but still you could see the contrast of the two styles. And Carrie Ann was near tears when she talked about how well-matched all the partners were this season, and called this routine beyond fusion; instead something completely unique and free.

Jordan Fisher: 30 out of 30 for fusion
Jordan and Lindsay Arnold used what Carrie Ann called "out of this world" skills to fuse together salsa and paso doble. She also thanked Jordan for helping Lindsay grow as a professional dancer. Bruno thought the routine was impeccable. And Len gave Jordan the biggest compliment there is: he told him he is the most complete male celebrity to ever compete on DWTS. And that comment brought Jordan to tears.

Foxtrot and tango are fused together for Frankie and Witney Carson's final routine. These two get the crowd going like no other. Len called Frankie 100 percent the people's champion, and said the actor epitomized what DWTS is all about. He also took a point off the score for what Len called "confusion in their fusion." Carrie Ann also thinks Frankie is the heart and soul of what this show is based on; and gave him a perfect score for his "elegant and smooth" routine. Bruno said the dance was hot to trot, but thought the duo lost a little control in all the excitement.