'Dancing with the Stars' jitterbugs and jives down memory lane 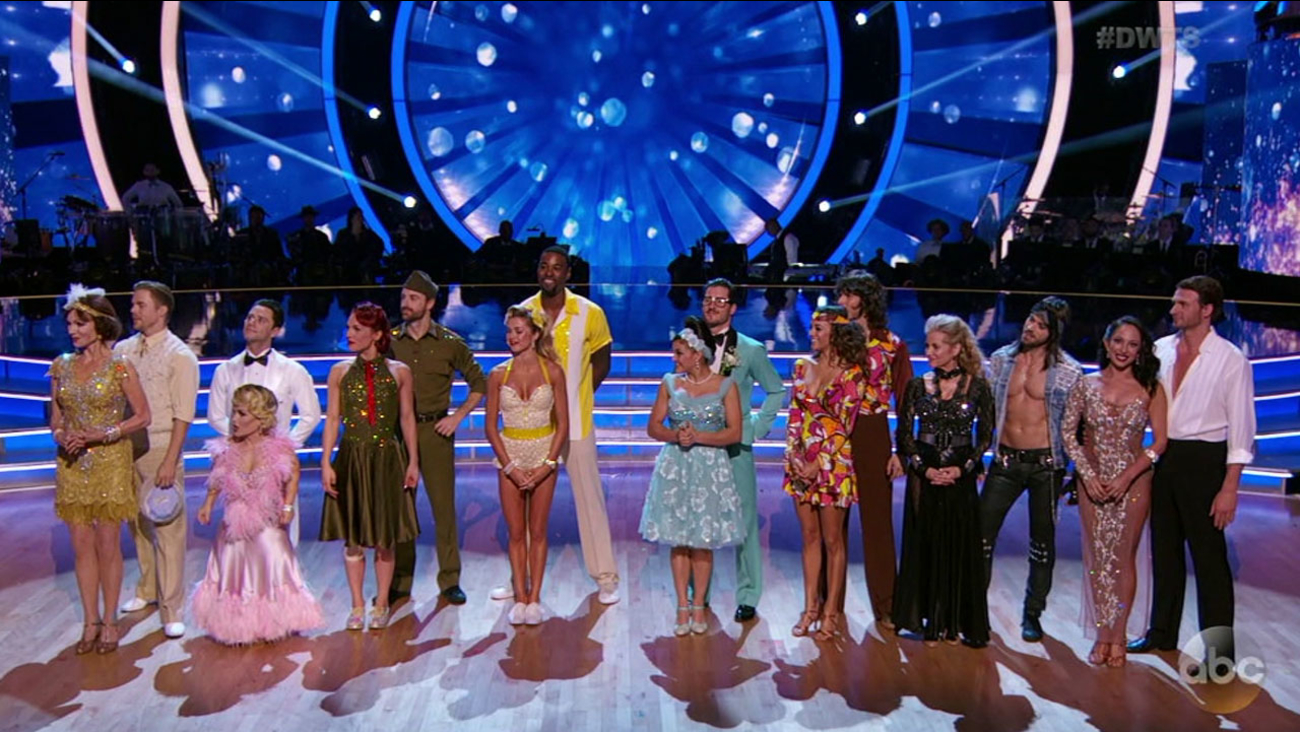 One more couple is eliminated from 'Dancing with the Stars' as the show takes a trip back in time with music from the 1920s through the '90s.

It's dancing through the years for week seven of "Dancing with the Stars." The theme: "Eras Night."

The idea is to showcase popular music and dances from the 1920s through the 1990s. Along with their individual dances, we also saw the celebrities paired into groups of four as "team past" and "team future." They were awarded bonus points for the group numbers. And in the end, another team was eliminated.

Here's a recap of the Monday competition, from highest score to lowest:

James Hinchcliffe - 36 out of 40
James and Sharna quickly and easily transport us back to the 1940s with their jitterbug. The pressure is on for two reasons: they've been topping the leader board, and Sharna injured her knee in rehearsal. The pro never lets on that she's hurting and the dance is free, fast and fun. Head judge Len Goodman has returned for the night, and he called James a major contender; Julianne Hough told the couple they always leave her wanting more and that from character to choreography and everything in between their routines are always well done; Carrie Ann Inaba loves the way James can immerse himself in any role; and Bruno Tonioli thinks their storytelling is always compelling and the duo is unstoppable.

Calvin Johnson Jr - 36 out of 40
Another athlete is tied for the top of the leader board. Calvin and Lindsay visited the 1950s with their fast-moving jive. Calvin is nervous that in this dance he can't do lifts, which is something he and his partner are particularly good at doing! But Lindsay wants to prove he's a great dancer, with or without lifts! Len called the routine a polished, high octane performance and was pleased to see how much Calvin has improved while he was in England; Carrie Ann coined a new phrase, saying the football player "Calvin-ized" the dance and makes things look energetic, effortless and easy on the eyes.

Laurie Hernandez - 34 out of 40
Our teenage Olympian gets invited to her first prom with Val and a 1960s quickstep. It's pretty adorable that the prom idea is foreign to her - Laurie is home schooled. And come on, who wouldn't want to go to the prom with Val? Len praised her performance but thinks Laurie needs to work a bit more on her technique. Val's answer? He thinks Len has jet lag! Bruno called her a luminous performer.

Terra Jole - 34 out of 40
Terra was disheartened by her drop to the bottom of the leader board last week. Sasha encouraged her to use that as the fire to keep the intensity up during rehearsals. Terra's two young kids come by rehearsal and she's equally fueled by them and wanting to be a role model to them. After their 1930s foxtrot, Julianne welcomed her back to the ballroom; Bruno thought she brought glamour and elegance to the routine; Carrie Ann praised Terra for fully committing to every movement; and Len thinks she puts the "all" in "small."

Jana Kramer - 34 out of 40
Jana had the weight of the world on her shoulders after earning the season's first perfect score last week. She's also on tour and had to fit rehearsal time wherever she could. The stress took its toll in tears and frustration but Gleb got her through the drama and they had fun with their 1970s samba. Carrie Ann complimented the duo for taking risks and encouraged Jana not to get discouraged; Julianne thinks the couple is breaking out at just the right time and told Jana she believes in her.

Marilu Henner - 29 out of 40
It was a 1920s Charleston for Marilu and Derek. This week, it was Derek who showed more stress during rehearsals and he says he was able to empathize a bit more with what Marilu has been going through. Len called the dance fun and entertaining and thought it captured the '20s vibe, even if the couple did lose some synchronicity along the way; Julianne felt transported to the era but applauded Marilu for keeping up with all the younger competitors this season.

Ryan Lochte - 28 out of 40
Ryan's getting the hang of learning the steps but hasn't quite mastered the idea of selling himself as a new character each week. He admits the people on this show have changed his life and gotten him out of what he called a very dark hole. For their 1990s rumba, Carrie Ann thought Ryan did well but is still missing that connection to the music; he's fine at doing what he is told but she wants him to really feel it. Len admired that the two simply came out and danced, they didn't try to hide behind a big production.

Maureen McCormick - 28 out of 40
Even though Maureen was around in the 1980s she wasn't much into rock and roll. She's learning a lot about music when their tango is choreographed to Bon Jovi's "You Give Love a Bad Name." Maureen and Artem are still working through their communication issues, but she says she is learning to speak up more and it feels good. Len enjoyed her rocker chick attitude and thought there was plenty of tango content; Carrie Ann told Maureen she thinks the reason people love her is that even if she makes a minor stumble, she keeps on going; and Julianne advised Maureen to take her hot rock outfit home!

In the team competition, "Team Past," featuring James, Calvin, Ryan and Maureen earned 38 out of 40 points for their dance. "Team Future," which consisted of Laurie, Terra, Marilu and Jana, each added 35 points to their totals.

In the end, we saw Jana and Maureen in jeopardy. And then Tom Bergeron announced Maureen had been eliminated.