'Dancing with the Stars' - men vs. women, and a surprising elimination 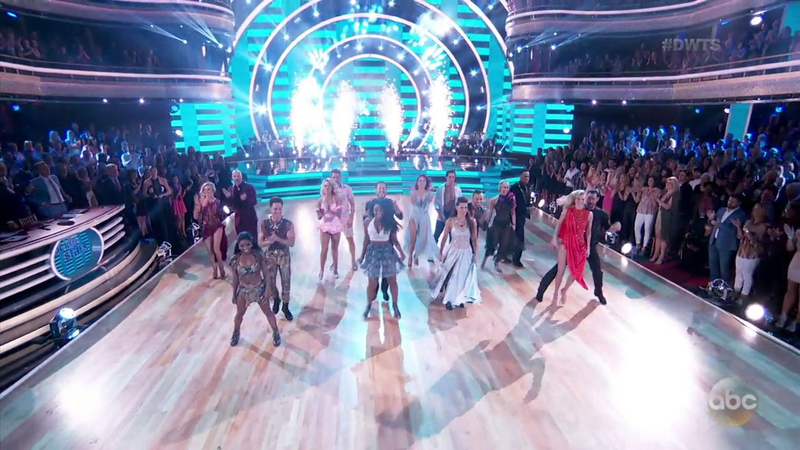 'Dancing with the Stars' pits men vs. women

LOS ANGELES -- It's a battle of the sexes for the team-dance segment of "Dancing with the Stars."

The show grouped the remaining four men and four women to compete against each other for an extra set of points. Plus, the couples performed to iconic songs from famous boy bands, like the Backstreet Boys, and girl groups, like Destiny's Child. To stretch the theme even more, the show invited Backstreet member, and former DWTS contestant, Nick Carter to weigh in at the judges' table. And yes, it really is a shocking elimination this week, folks!

Here's a rundown of the night's episode, from highest score to lowest:

Heather Morris: 40 out of 40
Heather said she wanted to earn her first 10; she earned four! Our first perfect score of the season! Maks is back with his partner and that clearly made all the difference. They showed just how the rumba is supposed to be done, and moved to the moody music of TLC's "Waterfalls." Head judge Len Goodman called the dance a knockout; Bruno Tonioli thought Heather danced like a champion; Carrie Ann Inaba said the dance was grounded and elegant and her technique was stunning; and Nick Carter called it his favorite dance of the night.

Normani Kordei: 38 out of 40
The Pussycat Dolls song "When I Grow Up" was one of Normani's favorites when she was younger. She shared that she watched the video to the song over and over again on YouTube, and even used some of the lyrics as a bit of a mantra for her career. Val choreographs a dynamic salsa and three of the four judges thought it was absolutely perfection. But Len felt there was not enough traditional salsa in the routine for his taste and gave them an 8.

Rashad Jennings: 37 out of 40
Rashad and Emma were a bit stunned by their low scores last week. And in true pro athlete fashion, it pushed him to work even harder this week on their tango. And Emma was only too happy to oblige and kick his butt in rehearsals. They get the great "Reach Out (I'll Be There)" by The Four Tops. Len thought this was a proper tango and he appreciated that; Carrie Ann thought that both style and technique were packed into the routine; and Nick told Rashad he's dancing on an elite level.

Simone Biles: 35 out of 40
Simone is tasked with channeling her inner Beyoncé as Sasha teaches her a samba they perform to the Destiny's Child song "Survivor." The Olympian is still struggling a bit to find her inner sexiness; gymnastics sheltered her from a lot of things non-gold-medal-winning teens experience. Len praised her control on the dance floor and Sasha's choreography; Bruno and Carrie Ann thought her timing was just a hair off this week, but Carrie Ann also told her that everyone's version of what's sexy is different and she just has to own her own power.

Nancy Kerrigan: 33 out of 40
Nancy proves her devotion to the show by recalling that Maks and Mel B. danced to the same song she's been assigned this week! And she's not too thrilled with that. Artem choreographs a fierce paso doble to En Vogue's "Free Your Mind." During rehearsal, she has yet another self-induced freakout, but she says that's her process. Carrie Ann and Bruno both thought they saw something unleashed in Nancy this week; Len advised her not to doubt herself so much and just come out and dance.

Bonner Bolton: 30 out of 40
Bonner has some extra added nervousness this week because he's dancing to a Backstreet Boys song and Nick Carter will be judging him on it. Plus, Bonner's partner Sharna was Nick's partner back in 2015. He does his best to move those hips in a sultry way for the rumba. Bruno acknowledged that this dance is particularly hard for men to master and Bonner's was a little jagged; Carrie Ann said the couple was in sync; and Len said it wasn't his best but also wasn't his worst. Nick offered the advice to let go of Bonner, let the dance take control.

David Ross: 29 out of 40
David's week looked similar to Nancy's on the frustration level. He's struggling with the Argentine tango (to *NSYNC's "I Want You Back") because it's supposed to be passionate and he feels awkward playing that role with the much younger Lindsey. She tries to give him a pep talk about not feeling defeated but it didn't exactly look like it worked. David got an 8 from Nick, who called him a fighter and said he was impressed. The three regular judges all offered 7s.

Nick Viall: 28 out of 40
Nick was very excited to learn the jive; that is, until Peta told him exactly what it is and how hard the dance is! And their routine is to a Beach Boys classic, "Fun, Fun, Fun." Nick's feeling self-conscious about his abilities, in comparison to his competitors. Peta's advice was to keep the focus on his personality, which always wins over the crowd. The judges agreed the dance was fun to watch, but Len said it lacked finesse.

Team Boy Band
The guys do a freestyle routine to a mash-up of songs from the Jackson Five, New Kids on the Block and One Direction. The camaraderie was apparent and the routine was pure fun. The guys all get to add another 33 points to their individual scores.

Team Girl Group
The women also do a fun mash-up to tunes from the Chiffons, TLC and Fifth Harmony. But their performance has to be hindered by the fact that Tom Bergeron revealed that this week's eliminated star would be coming from this group. The judges were a bit underwhelmed with the routine; still, each woman gets to add 34 more points to her score.

Who goes home?
Simone and Normani are told they are safe for another week; that leaves Nancy and Heather in jeopardy. And in week six, after earning the season's first perfect score, Heather Morris is eliminated.