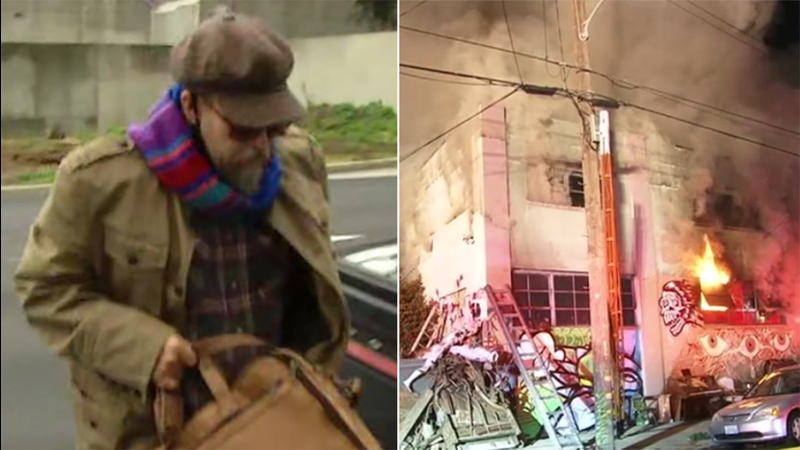 SAN FRANCISCO (KGO) -- Ghost Ship master tenant Derick Almena was dropped off in front of an Oakland courthouse Monday to learn his fate for his role in the disastrous warehouse fire that killed 36 people.

"It would have taken so little for you to give up just a pinch of your hipster ego for the sake of others," said Dolan. Your swaggering ego killed 36 people."

Like most of the victims, Chelsea Dolan was trapped on the second floor of the warehouse, a cluttered and unlicensed venue for a music concert that ended in a deadly fire in December 2016.

"I curse you with the pain in your bones and your muscles that comes from clenching in fear as you face the fury of a firestorm coming to consume you," Colleen Dolan told Almena. "I do not forgive you. I never will."

Andy Kershaw is the husband of Amanda Allen:

"Dear Derick, my wife burned to death in your house. She experienced literally the worst kind of death I can imagine, choking on smoke from burning junk. I know it was an eternity for her," said Kershaw.

"Amanda was known for her glasses, which I received back twisted by heat and flame, covered in soot," Kershaw added. "I would never show those glasses to anyone now, because I don't want anyone else to have to see that."

"Nicole obviously knew she wasn't getting out," added Carol Cidlik, mother of fire victim Nicole Siegrist. "She texted me 'I'm gonna die now.' Nicole was my only child. This horrible crime has changed my life completely."

Almena accepted a deal in January, pleading guilty to 36 counts of involuntary manslaughter. He has been on house arrest since May, released due to the pandemic.

"I am repulsed by this plea agreement. You do not take responsibility for your actions. I am angry with this court in that it is a legal system, not a justice system," said victim Donna Kellogg's stepfather Keith Slocum.

"I miss him so much. I am not satisfied with this plea deal," said Michelle Worthington, sister of victim Joey Matlock. "How is this justice?"

An earlier plea deal was thrown out because a prior judge said Almena lacked remorse. Sketch artist Vicki Behringer described his demeanor in court today.

"His reaction went from indifference, to like, rocking and looking down and he almost looked like he was sobbing a couple times, but I can't know that," said Behringer. At one point, Judge Thompson stopped the proceeding to have deputies check on Almena, and search him, apparently for drugs. None were found and the hearing resumed.

Almena did not speak, but his attorney Tony Serra read a brief statement: "I am sorry. I am sick with shame. It is my fault," read Serra.

Under the plea deal, Almena received 12 years in prison, but with time served and time off for good behavior, he will serve the rest of his sentence in home detention and then three years of probation.
The warehouse had been turned into makeshift living quarters for local artists in Oakland. There were no sprinklers, smoke alarms, or exit signs.