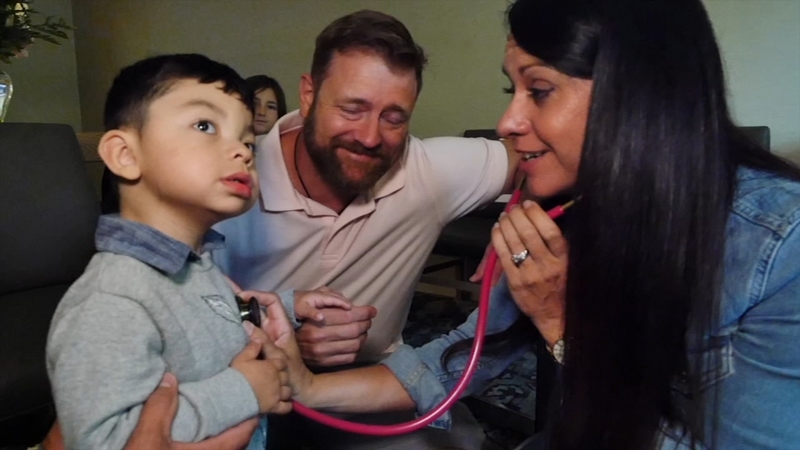 TOMBALL, Texas -- A Texas family traveled across the continent this summer to hear their son's heartbeat.

A backyard tragedy left Jackson James Bennett battling for his life in 2016. The boy didn't make it.

Jackson may be gone, but he's still helping a little boy far from Houston in America's Last Frontier.

Jackson's parents, Adam and Jenny Bennett, opened up about their loss in an emotional interview with ABC13.

The Bennetts said Jackson wandered out through a doggie door. Each thought he was being supervised inside the home.

Within minutes, Jenny found her son floating in the pool.

"These children are so drawn to the water that they jump in. They're curious. I feel like being transparent, genuine about our situation that lives can be saved because other parents can relate to us," she said. "It took me about two years to become brutally honest about it. I feel that the stigma surrounding drowning and parents being neglectful leading to the cause keeps a lot of parents quiet about this. I was afraid of being judged. I was afraid that people would see me as a bad mom. I've come to hear so many stories of other parents who have lost children to drowning. We all have similar stories."

Jackson's mother and father made the decision to donate his organs.

"I miss him terribly. There's not a day that goes by that I don't think about him in one capacity. There's not really words for how much I miss him," said Adam. "To know his heart is still beating and that we can go meet the little boy who has his heart ... the heart you feel like is part of the soul. You feel like there's a part of his soul that's still there. Going to meet this little boy is in part going to reunite with our little boy a little bit."

Jackson's heart went to a boy named James from Alaska. Doctors feared a heart defect might end James' life before it even began. James never left the hospital after birth.

He came close to death.

Paramedics flew him from Anchorage, Alaska to Seattle, Washington. Specialists said only a transplant could save him. James' parents, Maria Rivas and Chavelo Argueta, said they prayed for a miracle.

"We never imagined he's going to be alive," said Rivas.

They waited months for an answer. In July 2016, doctors told them they found a heart.

"I feel happy for him and for us," said Argueta. "At the same time, I cry too. I think about that other family. I told my wife my baby has the chance to survive, but the other family doesn't have a chance anymore."

The two families connected over social media. The Bennett family traveled to Anchorage this summer to meet James.

They encourage all parents to enroll their kids in survival swim lessons.