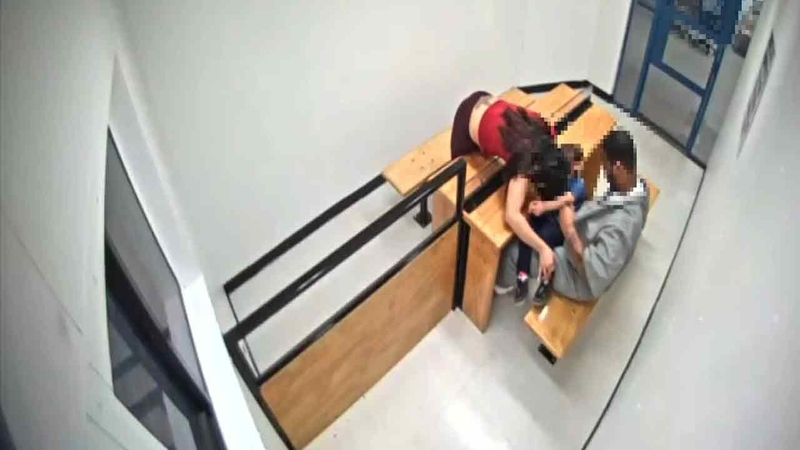 The surveillance from the April incident shows a visitor handing her daughter over to the inmate, and quite possibly something more.

"It's very frustrating, because we know what they're doing and we know who they are," Correction Officers Benevolent Association president Elias Husamudeen said. "They not only smuggle in drugs in these balloons, they also smuggle in razors and weapons inside these balloons."

He says inmates at Rikers Island go to great lengths to have visitors bring them contraband, oftentimes stashing the illegal goods inside their body cavities.

The video, he says, shows a slick transfer of contraband. The female visitor is holding her daughter in her arms, then at one point reaches in her own pants. Husamudeen said she takes something out, slips it in her little girl's pants and then hands her to the inmate. Within seconds, Husamudeen said the inmate reaches in the child's pants, removes the alleged contraband and stashes it in his pants.

Correction officers rush in and pat down the inmate, but they are prohibited from doing cavity searches. Neither the inmate nor the woman were charged.

"This woman, even if she was arrested, which she wasn't, she would have only gotten a DAT," Husamudeen said. "Nothing would have happened to her, and she would have been able to come back the next day and visit another inmate and do the exact same thing."

The Bronx District Attorney's Office says if contraband had been recovered, the visitor could have faced serious felony charges. Additionally, a huge change is expected to come in the spring -- the addition of body scanners at Rikers.

The body scanner legislation was signed this month and goes into effect in 120 days, on January 30, 2019. It's something Mayor Bill de Blasio supports and would have been a valuable tool in this instance.

Each year, 400 visitors are arrested for smuggling in contraband.