'Frozen's' new Elsa is kind of a Broadway big deal

KGO
By Reggie Aqui
SAN FRANCISCO (KGO) -- Actress Caissie Levy is avoiding the movie 'Frozen.' She has nothing against Elsa. In fact, the reason she isn't viewing the animated hit about a lonely ice princess is because she's about to become her.

"I haven't really watched the film ever since I first saw it just to give it a little distance and put my own stamp on it," Levy told ABC7 News.

In just a few weeks, Levy will star as Elsa in the new Broadway version of Disney's blockbuster, and she can hardly believe it. "It's kind of unfathomable," Levy said. "The weight of it hasn't really hit me."

VIDEO: We had a sing-off with 'Frozen's' new Elsa and it was everything
EMBED More News Videos

Levy has big shoes to fill. Idina Menzel became an international star after voicing the animated version of 'Frozen.' The two Broadway standouts have a lot of roles in common. Menzel played Maureen in Rent. So did Levy. Menzel played Elphaba in Wicked. So did Levy. And now Levy prepares to sing 'Let it Go' after audiences around the world already know the Menzel version by heart.

"I bumped into her at a Broadway show and just said 'Hey, I'm going to be doing Elsa', and she said, 'Oh my gosh, I'm so excited for you.' She was incredibly gracious about it." Levy says she's been given the freedom to take the song in some new directions. "They didn't want me to just sing it the way Idina sings it, they wanted me to sing it and make it my own."

Before she starts previews of 'Frozen' in February, Levy stopped by ABC7 News to talk about a couple of San Francisco concerts she's performing .

She'll be going through her extensive Broadway resume at Feinstein's at the Nikko. ABC7 Mornings anchor Reggie Aqui helped her warm up her voice (way too early for a Broadway singer!) by doing a fun sing-a-long of her career.

I’d make a convincing news anchor, eh? Had fun chatting with @reggieaqui this morning on @abc7newsbayarea all about my shows @feinsteinssf this Friday Nov. 17 & Saturday Nov. 18. Vid to follow :) #ronburgundy pic.twitter.com/mvLtFHH8QR 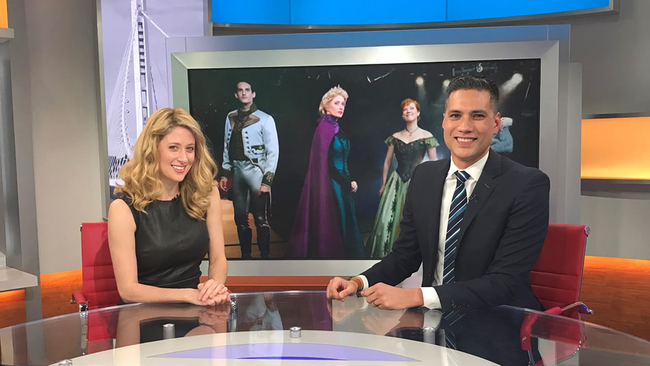