Hundreds stand in long line ahead of 'Hamilton' in San Francisco

KGO
SAN FRANCISCO (KGO) -- Hundreds of people waited in a long line to get tickets ahead of "Hamilton" at the SHN Orpheum Theatre in San Francisco.

You want to have a seat if you're going to be waiting in line for hours hoping to get @Hamilton tickets! pic.twitter.com/kSd9ZDmYFW

Tickets to see "Hamilton" went on sale to the general public online, by phone and at the box office at 10 a.m. on Monday.

You would not believe the lines for #Hamilton! Some people slept overnight for the chance to buy tickets! pic.twitter.com/RB32UiwNDI

It will be in town for five months starting in March, but there has already been a rush on tickets like never seen before. In a line of hundreds of people that snaked down and around the theatre, ABC7 News found two friends from Sacramento near the box office who arrived Sunday and said they slept in chairs on Market Street.

Hundreds stood in line outside San Francisco's Orpheum Theatre to get tickets to go to the #HamiltonMusical. https://t.co/xQl1j29xPx pic.twitter.com/l4emPqtakA

However, no one there with their chairs and sleeping bags wanted to miss their shot. This Broadway hit received a record breaking 16 Tony nominations this year and took home 11 awards, including Best Musical.

"Laughing at my sister as she's dancing in the room. You walked in and my heart went boom," "Hamilton" fan Charina Moore said.

The soundtrack is what first grabbed Moore's attention. Others told ABC7 News that "Hamilton" became a must see after a recent challenge by the Broadway cast to Vice President-elect Mike Pence, asking him to work for all Americans..

The tickets are going for $100 to $524 at the box office and into the thousands on the secondary market.

"Hamilton" is the story of Alexander Hamilton, one of the nation's founding fathers and it's told through hip-hop music, with diverse actors. San Francisco Chronicle theater critic Lily Janiak says that multi-culturalism is what's made this a phenomenon. "You finally see a musical, which is the most American of all art forms that reflects that world on stage. That's really something powerful," Janiak said.

The frenzy to see the hottest show in town has landed Douglas Fennell a job as a professional line sitter. "I think it's a suitable service for people that don't want to sit out all night who aren't used to this environment," Fennell said.

"Hamilton" premiers at the SHN Orpheum Theatre in San Francisco in March.

She is singing and dancing to @Hamilton tunes while waiting in line for tickets! pic.twitter.com/CTjoubCnSq 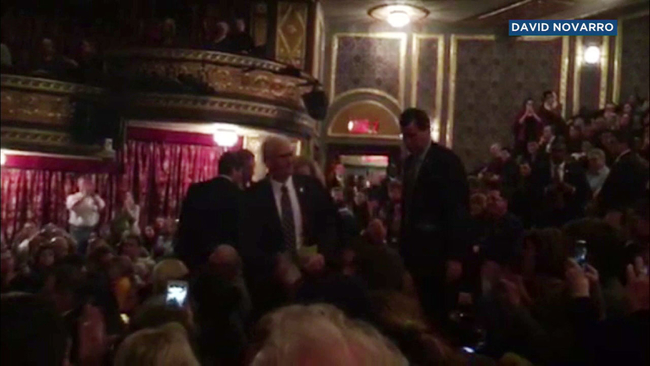