These illegal backfires can be very dangerous. If private contractors don't inform the incident command post about what they're doing, other firefighters could be at risk.

The video shows private firefighters hired by Napa Valley wineries being detained by the CHP and CAL Fire around 4 p.m. Friday. They are suspected of setting illegal backfires.

Dan Noyes: "It's illegal for someone to set a backfire if they aren't part of the incident command structure, correct?"

Erick Hernandez, CAL Fire Spokesman: "That is my understanding. It is illegal."

CAL Fire confirms an investigation is underway that could result in charges and arrests. Hernandez said, "Safety is our priority, and not only for the public, but also for our first responders that are working these areas."

Backfires are an essential tool in combating wildfires, as was evident at Schweiger Vineyards and Winery in St. Helena last week. Crews used drip torches to set small blazes and then extinguish them, to deplete the fuel before the wildfire arrived.

Andy Schweiger said at the time, "The wildfire is just coming up now and meeting our back-burn."

A Santa Rosa rancher is being hailed a hero after he saved at least 40 homes from burning in the Glass Fire - using his more than 50-year-old bulldozer.

The owner of Schweiger Vineyards showed the I-Team how that backfire set by CAL Fire crews saved his winery.

"We set the fire, so it was burning downhill as the fire was coming up," Fred Schweiger said. "And that's so important to get that greater distance, that saved my house and that saved our winery."

The Glass Fire did destroy what used to be his parent's house, and this year's harvest is probably ruined by the smoke, but Fred Schweiger is thankful it didn't claim more of his life's work.

To find out more about those private firefighters, Dan Noyes followed two crews from Oregon putting out hot spots off Spring Mountain Road yesterday; they're working through a government contract for CAL Fire. They also worry about freelance firefighters, sometimes hired by the wineries.

"Guys that throw a pickup truck together and a tank in the back. They don't have any training," said Jaime Pickering of Franco Reforestation. "They don't have insurance, they don't have workman's comp. They aren't even an official business, but they look like a firefighter."

Jaime Pickering told the I-Team if private contractors set backfires without telling anyone - without calling in their plans to the incident command post, that could endanger any firefighters who may be working nearby.

"Our job is to come out here put out fire and everyone go home safely. And when you get somebody who's running lone wolf, people get hurt firefighters get killed. I've been to enough firefighter funerals in my lifetime. I don't want to go to more."

CAL Fire tells the I-Team the investigation should wrap up in the next day or two. 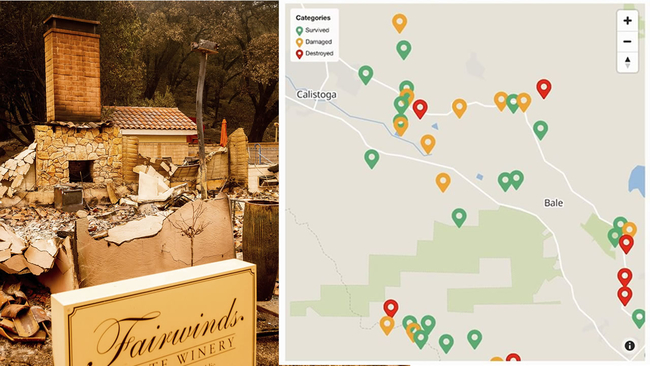