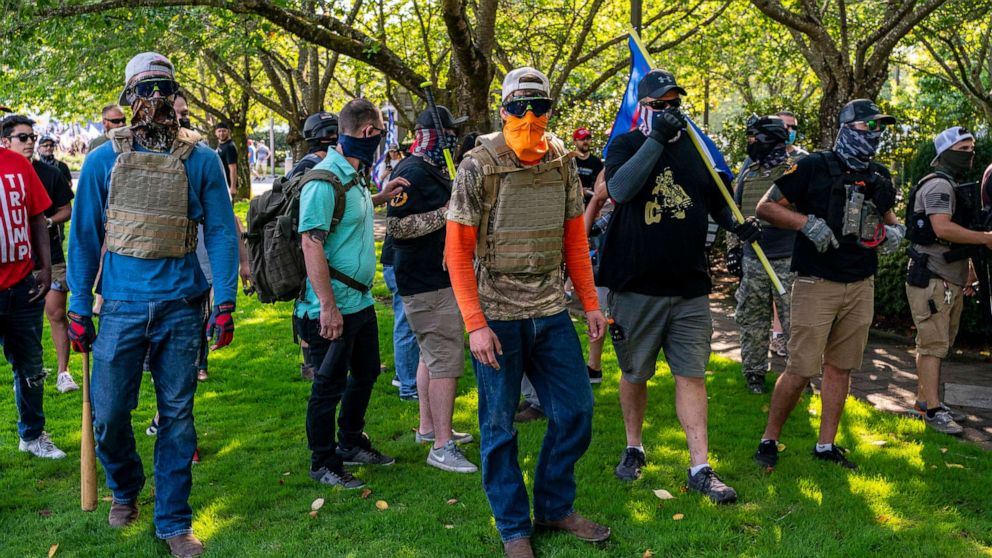 Members of the Proud Boys are celebrating comments from President Donald Trump at Tuesday night's presidential debate in which he told the group to "stand back and stand by."

Asked bluntly by moderator Chris Wallace if he would condemn white supremacists during the debate, Trump refused.

"Who would you like me to condemn? Who?" Trump asked.

Biden asked the president to denounce the Proud Boys, referring to the far-right extremist group, which recently rallied in Portland, Oregon, and has been tied to acts of violence.

"Proud Boys. Stand back and stand by," Trump responded. "But I'll tell you what, somebody has got to do something about antifa and the left because this is not a right-wing problem, this is a left-wing problem."

ABC News' Kyra Phillips asked Trump Wednesday at the White House if he would like to denounce white supremacy and Trump said he's "always" denounced it.

When asked specifically about the Proud Boys, Trump said he "doesn't know who they are" and that they should "stand down" and "let law enforcement do their work."

Still, the Proud Boys were energized by the president's comments, unveiling a new message on T-shirts following the debate: "President Trump, standing by."

On the conservative social media site Parler screenshots posted by a reporter found one user who said "this makes me so happy." Another said, "well sir! we're ready!"

According to The Washington Post, Trump's comments inspired memes including one of Trump in a polo shirt, which is part of the Proud Boys' signature aesthetic.

"The Proud Boys have already responded with the emblems that they're creating with the slogan and tweeting about it. And you know white supremacist groups, and far-right extremist groups in general, when something like this happens they really do see it as a legitimation as a -- an endorsement. And it really does embolden them," said Peter Simi, who studies extremism at Chapman University.

The Proud Boys is a men's group who call themselves "Western chauvinist" and say they are defending values like freedom and liberty. Formed in 2016 by Gavin McInnes, who later distanced himself from the group, they deny any connection to the alt-right and claim to be anti-political correctness and anti-white guilt, according to the Southern Poverty Law Center.

"But one of the things we're not is white supremacists and fascists," Proud Boys chairman Enrique Tarrio said to The Washington Post.

Still, "rank-and-file Proud Boys and leaders regularly spout white nationalist memes and maintain affiliations with known extremists. They are known for anti-Muslim and misogynistic rhetoric," according to the SPLC.

Members of the group have been associated with acts of violence, including at the 2017 Unite the Rally in Charlottesville, Virginia, where a 32-year-old woman was killed when a driver rammed into a crowd of counter-protesters. The driver was found guilty of first-degree murder.

Former Proud Boy member Jason Kessler helped organize the event, "which brought together Klansmen, antisemites, Southern racists and militias. Kessler was only 'expelled' from the group after the violence and near-universal condemnation of the Charlottesville rally-goers," according to the SPLC.

In 2018, its members participated in street brawls during protests in Portland, Oregon, Seattle and New York City.

Following the brawl in New York City, two of its members were sentenced to prison and seven others pleaded guilty, according to the Anti-Defamation League. Violence involving the Proud Boys was also present in Portland, Oregon, this summer, when right-wing and left-wing protesters clashed amid unrest over racism in policing in America, though no one from the group was arrested, according to the ADL.

"Violence in terms of becoming a member and really the violence that they promote towards people that they view as un-American whether it's communists, whether it's antifa, or 'leftists,'" Simi, said.

For these far-right and extremist groups, Simi said, comments like the president's are seen as an endorsement.

"This is something that for these types of groups, it's music to their ears," he said.

Earlier this summer, an intelligence bulletin obtained by ABC News cited the threat of white supremacists at protests.

"Based upon current information, we assess the greatest threat of lethal violence continues to emanate from lone offenders with racially or ethnically motivated violent extremist ideologies and (domestic violent extremists) with personalized ideologies," according to the bulletin, which was obtained by ABC News.

Senate Minority Leader Chuck Schumer, D-N.Y., condemned the president on Wednesday, saying his refusal to denounce the groups was "beyond his capacity."

"In a national debate he not only refused to condemn a group of far-right white supremacists, he told them to stand by," Schumer said. "As much of the country was in despair last night at the president's juvenile behavior, one group was celebrating, the Proud Boys. That's who was celebrating President Trump's debate performance: white supremacists."

Trump's refusal to condemn white supremacist groups comes as Americans nationwide have been in the streets protesting over the deaths of Black Americans at the hands of police and as the president has sought to undermine the legitimacy of the election -- which is already underway -- and has called on supporters to go out to watch the polls on Election Day.

Simi said the president's comments are unprecedented and his later refusal to condemn civil unrest following the election was just as dangerous.

"He essentially refused to do that. So he's already told the Proud Boys to stand by and now he's saying 'Hey civil disorder is not off the table. If this is a bogus election, that's a legitimate option and I've got my proud boys on standby,'" he said.