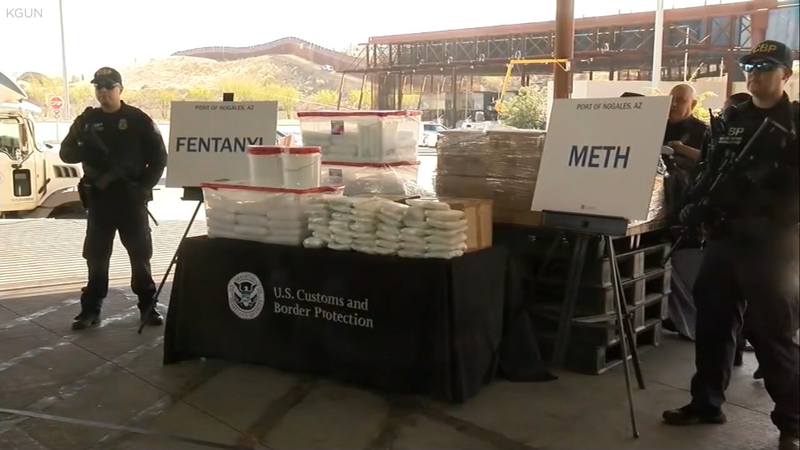 NOGALES, Ariz. -- U.S. Customs and Border Protection officials intercepted nearly 254 pounds of fentanyl at the U.S.-Mexico border Saturday in what the agency called its largest fentanyl bust ever.

Valued at approximately $3.5 million, the fentanyl was found in a secret compartment inside a load of Mexican produce heading into Arizona. The agency's police dog team alerted officers to the presence of drugs after a secondary inspection indicated "some anomalies" in the load, Nogales CBP Port Director Michael Humphries said.

Most of the fentanyl was in powder form, though the load did contain about 2 pounds of pills. Agents also seized nearly 395 pounds of methamphetamine with a street value of $1.18 million, Humphries said.

"It is said that a quarter-milligram, or the size of a few grains of salt, of fentanyl, which is a dangerous opioid, can kill a person very quickly," Humphries said. The seizure, he said, had prevented an immeasurable number of doses of the drug "that could have harmed so many families."

Fentanyl has caused a surge in fatal overdoses around the U.S., including the 2016 accidental death of pop music legend Prince, who consumed the opioid in counterfeit pills that looked like the narcotic analgesic Vicodin. U.S. law enforcement officials say the illicit version of the painkiller is now seen mostly as a white powder that can be mixed with heroin for an extra kick as well as blue pills that are counterfeits of prescription drugs like oxycodone.

The legal prescription form of the drug is used mostly to provide relief to cancer patients suffering unbearable pain at the end of their lives.