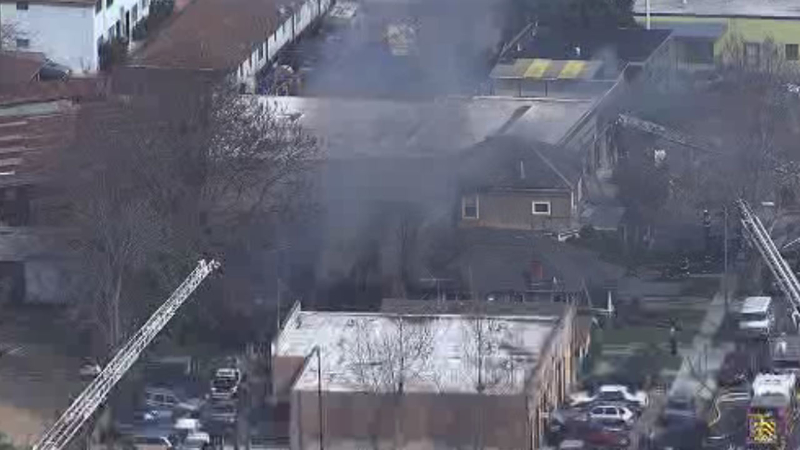 SAN JOSE, Calif. (KGO) -- A partially paralyzed woman rushed out of a burning building and neighbors are questioning why firefighters just across the street couldn't put out the flames.

The crews from station No. 30, directly across the street, arrived on scene within two minutes, but the fire truck they have is used to rescue people. It's not equipped with a water tank and pump to battle a fire.

The fire broke out Friday at a home on Auzerais and Gifford avenues, right across the street from San Jose Fire Station No. 30.

"He goes, 'Mom the house is on fire.' I said, 'No, Ruben the house is not on fire.' So, he just picked me up threw me over his shoulder and he took me outside and he set me over here in a chair," Eggan said.

Around noon people escaped three homes on fire on San Jose's Auzerais Avenue. As it spread, they took cellphone video.

"I look at all the flames on the house and the roof all burning we didn't know where the fire was coming from," Eggan said.

Firefighters called a fourth alarm and by about 1:30 p.m. they extinguished the flames, which had spread to multiple units on the properties.

"Everything that I own is gone," she said.

Now the ATF is investigating and people are questioning why the station across the street couldn't put it out quicker.

San Jose Fire Capt. Tremaine Thierry explained Station 30 is equipped with a truck used for rescues. Engines with water capabilities had to come from nearby stations because 30's engine was removed in 2010 during budget cuts.

"This particular truck does not have water on it," Thierry said. "The second unit on scene was a fire engine from one of the neighboring stations, which arrived on scene right about five minutes from the time of dispatch."